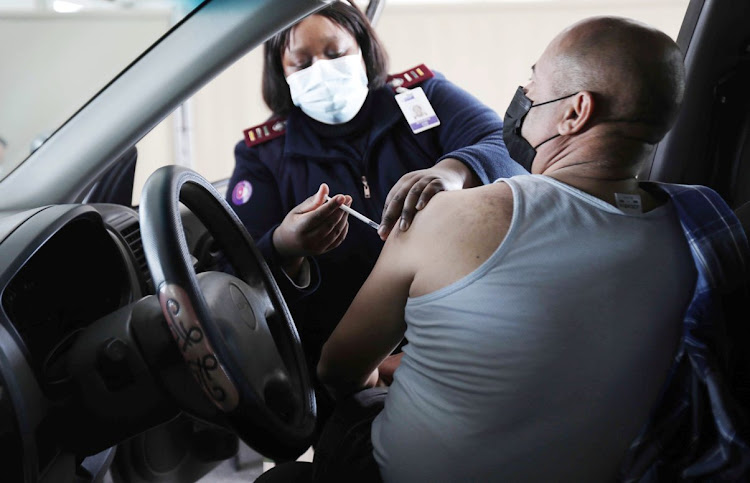 Arriving on his bike with other cyclists, Winde said: “We are encouraged by the amazing comments we get from citizens who have been through our vaccine sites.

Winde said the province was emerging from the peak of its third wave but this meant people were irresponsibly “relaxing their protocols” or declining vaccines simply because fewer people are dying.

Social development MEC Sharna Fernandez said: “This section is for people who don’t want to get out of the bubble of their vehicles when they get vaccinated, and even better, it’s for those who want to cycle to the site.

“To see a group of cyclists coming through in the early morning for their vaccines is an incredible thing.”

Health MEC Nomafrench Mbombo said it was time for all who are eligible to get vaccinated, and that while it is great that the province has hit the 2-million mark, it should aim for “70% by the end of November”.

While Mbombo posed with a bike, she laughed and said her first love is boxing, so she “couldn’t really compete with the premier” when it came to cycling.

Today I am taking part in the launch of the drive-through section at the Athlone Vaccination Centre of Hope, ahead of it opening tomorrow. I will be cycling from the Red Cross War Memorial Children's Hospital to the drive-through site to demonstrate its accessibility. #LetsDoThis pic.twitter.com/l927iRm331

Mbombo has also implemented her JabB4Jol drive, in which she is going to sites where people normally hang out, rather than trying to get them to formal vaccine sites if they’re reluctant to go.

This had also seen her setting up pop-up vans in Khayelitsha, and at taxi ranks around the province.

She said research had shown that people in Khayelitsha are “uninformed” but that as soon as they had the right information, they were happy to get the jab.

In Mitchells Plain, on the other hand, where registrations were exceedingly low, it was a case of “misinformed rather than uninformed”.

She said influencers and community leaders, such as pastors, had put people off by saying the vaccines were “evil”.

Those who still refused were becoming “hubs for mutations”, she added.

NICD experts said on Monday there was no reason to believe the new variant - dubbed C.1.2 - will disrupt the efficacy of either the J&J or the Pfizer ...
News
1 month ago

On Wednesday, she visited a club in Khayelitsha and asked those who normally frequent it at night to come and get jabbed during the day.

Two hundred youngsters arrived, and she said that’s the way to do it. “People will be attracted to spaces they already know.”

The first customer at the drive-through caused a few good-natured chuckles as he was wearing a long-sleeve shirt and the nurse could not get to his upper arm.

He eventually had to take his top off in the car, with members of the media looking on, but joined in the laughter.

Cyclist Ibrahim Isaacs, 50, who was in the observation area just after his jab, said the drive-through might encourage some of the vaccine-hesitant residents to come forward.

“It is a difficult situation, because the more some of us promote it, the more others discourage people,” he said.

“The only way to fight hesitancy is with facts and education. It is not easy, but if you give people the stats and the right facts, maybe they will follow our lead and come to the site for their vaccines.”

Vaccinated people who contract Covid-19 have significantly lower odds of severe disease or hospitalisation than unvaccinated people, according to key ...
News
1 month ago

Med student uses sick beat to encourage South Africans to get vaxxed, yo!

Moosa joins a host of SA celebs as #BeaSAver ambassadors, aiming to assuage vaccine hesitancy and encourage people to protect us all against the ...
Lifestyle
1 month ago