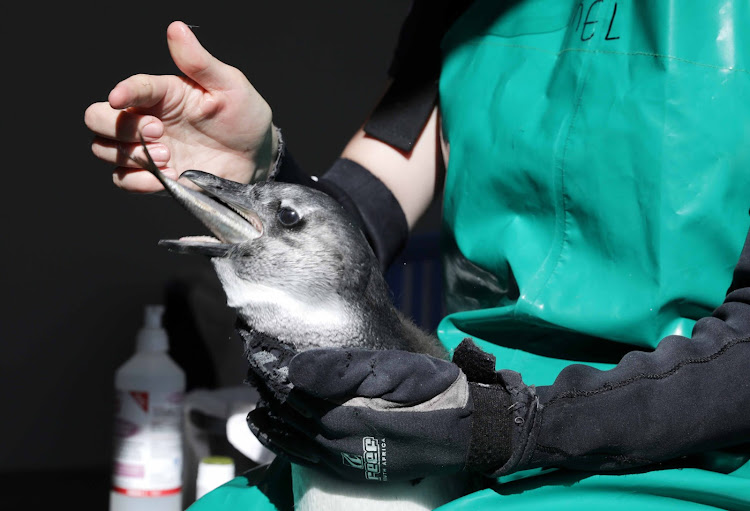 Humans have fuelled the decline of the African penguin population, but a group of committed hand-rearers is trying to save them.
Image: Esa Alexander

Conservationists have rescued 94 starving penguin chicks from Bird Island off the coast of Gqeberha and transferred them to a rehabilitation centre.

The rescue mission late last month by the Southern African Foundation for the Conservation of Coastal Birds (Sanccob) comes amid growing concern about a sharp decline in fish around the country’s main penguin colonies.

“The chicks were identified as underweight and in extremely poor condition,” the organisation said in a statement this week.

“They were transported to Sanccob’s Gqeberha centre for hand-rearing and rehabilitation until they meet release criteria to be returned to the wild in four to six weeks.

“The weight and condition of the chicks from Bird Island are far from being ideal for their age and the next few weeks will entail regular feeds and supplements, which is individually prescribed for each chick by Sanccob’s veterinary and rehabilitation staff.

Nearly 1,700 abandoned Cape cormorant chicks were rescued from Robben Island during a two-day joint operation between various marine and wildlife ...
News
10 months ago

An increase in the number of mass rescues of vulnerable species in recent years has highlighted a concerning dip in the abundance of sardine and anchovy — a staple food for many bird species including penguins, the Cape Gannet and the Cape Cormorant.

Scientific research has linked the decline in the African penguin population to increasing food scarcity.

The latest mass rescue of chicks followed ranger concerns about malnourished chicks on Bird Island. “A decision was made to intervene to ensure their survival,” Sanccob said.

Bird Island and St Croix Island, both in Algoa Bay, used to be home to about half of SA’s African penguin breeding population. However, numbers have declined by more than 70% since 2014.

Environmental groups have called on the government to ban fishing around the key breeding islands to allow numbers to recover.

“Unfortunately, for these malnourished chicks, these potential restrictions are coming too late and urgent rehabilitation interventions are needed to secure their short-term survival,” Sanccob said.

“Unless the ecosystem that the penguins rely on is protected and the penguins can find enough fish to eat and to feed their chicks, these catastrophes will continue and the numbers of African penguins will continue to decline. [They] could become functionally extinct in the wild in the years to come.”

'We are in crisis mode': Experts are warning of species becoming extinct

Louis Allison was excited to meet a new stranger from the deep while fishing at his favourite beach south of Durban. He tagged his catch — a 68cm ...
News
3 months ago

Filmmakers spent nearly a year shacked up with penguins in Cape Town to showcase the plucky seabirds. But is it too late?
Lifestyle
5 months ago

Conservationists are using penguin "dummies" and fake penguin broadcasts in an attempt to convince African penguins to settle at De Hoop Nature ...
News
5 months ago