WATCH | It feels good to be home, says David Mabuza on return to SA after Russia treatment

'Doing this work is part of saving the country': Mabuza on vaccination drives

Deputy President David Mabuza says the government is aiming to get 40-million people vaccinated against Covid-19 by the end of December.

“We think by that time [December], we will slow the transmission and the rate of people dying. It's important that all of us vaccinate,” Mabuza said.

He was speaking to journalists outside Odirileng Maponya clinic in Kagiso, where he encouraged community members to get vaccinated.

Asked how he felt about being back in SA after more than a month receiving medical treatment in Russia, Mabuza said: “It feels good. It's my country and I feel doing this work is part of saving the country and it is our duty. I love our people. I can't see them die every day. If I can, I will stand and encourage them”.

This as the interministerial committee on Covid-19 Vaccines identified three provinces falling short of their targets to reach population immunity, including Gauteng. The West Rand district municipality was chosen for the visit as it has been identified as the lowest-performing subdistrict, with only 8% of the total population vaccinated.

Mabuza said he was confident that those he had spoken to during his walkabout in Kagiso, would eventually get vaccinated. “We are going to work with our councillors. All of us are trying to encourage our people to vaccinate.”

Government officials would also be visiting homes to check whether people were getting the jab, he said.

“We will be going to the North West, Mpumalanga, to the Western Cape, because we must reach that target by the 31st of December.

“We want to explain why it is important to vaccinate. Our economy is devastated. People have lost jobs. We must pull ourselves out of this problem.”

There was no cause for concern regarding the new Covid-19 variant, Mabuza said. “If we feel the new variant is a problem, the minister of health will announce that. For now, we are tracking it. There is no reason to worry now.” 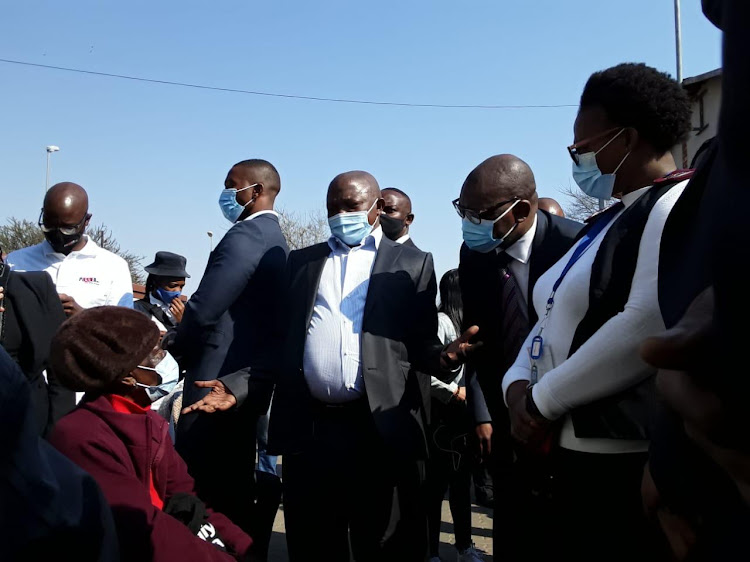 Makhura said the provincial government had embarked on a campaign to deal with vaccine hesitancy in Kagiso - a mining area. “One of the things we did was to work with mining houses. They are now driving vaccination in the mines. The campaign has been going very well. You will see a significant turnaround.”

He said the province had also embarked on a door-to-door campaign to increase the uptake of inoculations. They will check how many people live in a household and how many have already had the vaccines. He said they would send healthcare officials to speak to those who had not been vaccinated to dispel any myths if there were any.

“We can't force people to vaccinate, but we are sensitising them.”

A majority of TimesLIVE readers believe that public figures have a duty to reveal whether they have been vaccinated against Covid-19.
News
1 month ago

The government, Makhura said, was aware of fake news being spread about Covid-19 and the vaccine. He said the government would make sure the correct information reached communities.

The premier said the government was aiming to reach at least 10.4-million of the 11-million Gauteng population.

“At the moment we have done over 3m vaccinations [in Gauteng]. The precise number of people who have had at least one jab is 2.5m.” The number of fully vaccinated people was almost 1.5m, Makhura said.

Some of the community members Mabuza spoke to told him they had been vaccinated, while others had not.

Vuyisile Malgas, 61, said he had not been vaccinated because he did not feel well. “I'm not OK, but I will go when I feel fine,” Malgas said.

Tebogo Mooki, who works as a car washer at the taxi rank, said while taking the jab was “scary”, he had plucked up the courage to do it. “It's the Right to do. I think everyone should do it.”

Mapule Tsolo, 45, said she was initially not ready to get vaccinated because she first had to do blood tests and take medication. “I'm now ready and I'm going to the clinic to vaccinate, right now.”

Vaccinated people who contract Covid-19 have significantly lower odds of severe disease or hospitalisation than unvaccinated people, according to key ...
News
1 month ago

"I just felt so good that I was in the right place at the right time, and I had done something to benefit the life of another person, Western Cape ...
News
1 month ago