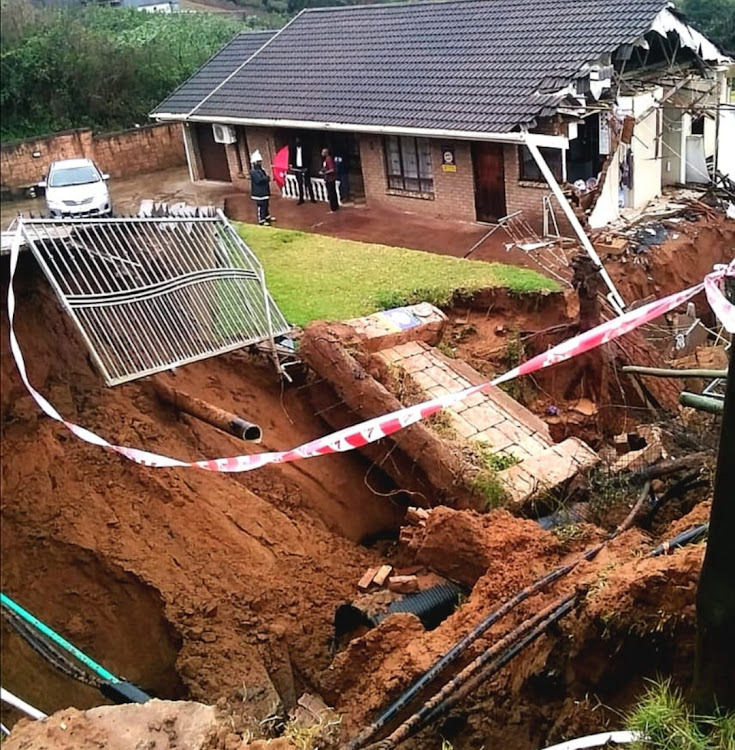 The extensive damage caused to a home in La Mercy, north of Durban, after a burst water pipe amid heavy rain.
Image: Supplied via Marshall Security

Part of a home in La Mercy, on the KwaZulu-Natal north coast, collapsed on Tuesday morning after a stormwater pipe burst.

The incident comes amid torrential downpours over large parts of the province since Monday.

A video capturing the extensive damage to the home, located on Twilight Avenue in the small coastal town, has been doing its rounds on social media.

Nazir Sadack, of the Community Emergency Response Team, told TimesLIVE: “There's a stormwater pipe that runs adjacent to the house. That pipe gave way and there was a wash-away as a result of the water gushing through.”

Sadack said the gushing water washed away soil in the vicinity of the house and caused the partial collapse.

“It started around midnight on Monday and about 7am on Tuesday morning there was a serious wash-away which resulted in the partial collapse.

“Thankfully there were no injuries.”

Multiple accidents as Durban is pounded by heavy rain

Torrential rain has resulted in several motor vehicle crashes in and around Durban.
News
8 months ago

The SA Weather Service (Saws) has issued a warning to KwaZulu-Natal residents about heavy rain, possible localised flooding and mudslides.
News
8 months ago