Investigation launched after fire at Christiana Hospital in North West 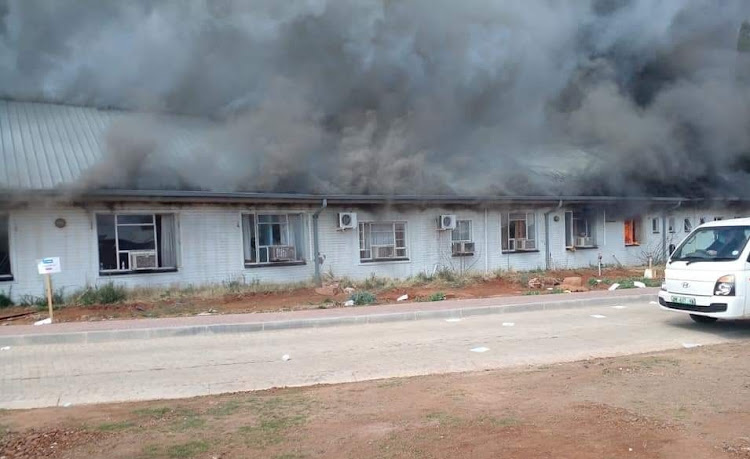 Christiana Hospital went up in flames while the construction was taking place.
Image: Supplied/Facebook:@ParamedicsSAPSandFirefightersSouthAfrica

The North West health department says investigations are under way to determine the cause of fire that broke out at Christiana Hospital on Wednesday morning.

Health MEC Madoda Sambatha visited the hospital on Wednesday to assess the damage.

“We will do our own investigations and hopefully by Friday we could have a preliminary report,” said department spokesperson Tebogo Lekgethwane.

He said there was construction on site dealing with plumbing and wiring, but that “we can't conclude that that is the cause. We need a proper investigation to establish what really happened.”

Police spokesperson Brig Sabata Mokgwabone said the fire broke out at the hospital between 8am and 9am Wednesday.

“There are no reports of any injuries and we were told that part of the hospital was under renovations and that was the part that was affected. The other part [of the hospital] that was not undergoing renovations had patients, but they were safely evacuated to other hospitals,” he said.

The newly appointed deputy minister of agriculture, rural development and land reform, Zoleka Capa, was among guests at the hotel.
News
2 months ago

Mokgwabone said the police have opened an enquiry for investigation.

Lekgethwane said all areas of the hospital were affected but there were no reports of any injuries or deaths.

Meanwhile, a fire broke out at the Mmabatho Palms hotel in Mahikeng in the early hours of Wednesday morning.

Mokgwabone told TimesLIVE that the cause of the fire was unknown and said that it would form part of police investigations.

MEC Madoda Sambatha have arrived in Christiana Hospital to assess the level of damages caused by fire this morning. All patients have been evacuated to other health facilities. No reports of injuries or deaths as a result of the fire. pic.twitter.com/sqPTtcAOm8

Firstly it was Mmabatho Palms Hotel burning but now it is Christiana Hospital burning 🔥😫😢 https://t.co/QOTxWyZ4H8 pic.twitter.com/NsZGDSc7Zb

Farmers said many of their animals had perished in the flames.
News
2 months ago

The families of three firefighters killed on duty three years ago say they have still not received any reports into the deadly blaze at the Bank of ...
News
2 months ago

Two children died in a house fire in Mpumalanga after their guardian allegedly left them alone with a burning candle and went to the shop.
News
3 months ago