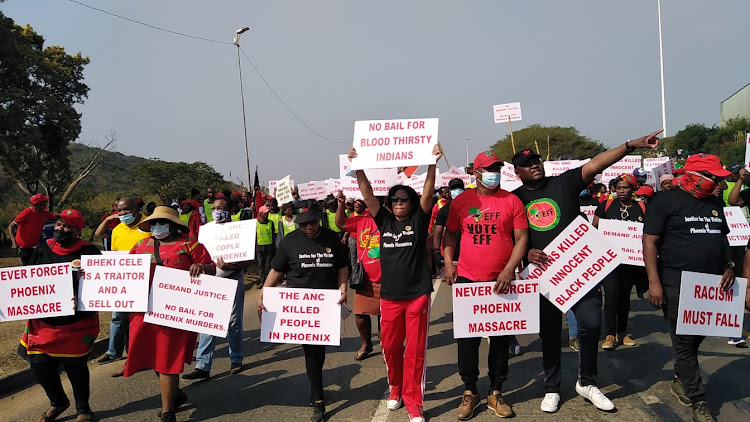 Scores of EFF supporters marched through the streets of Phoenix recently to register their grievances against the killing of black people during the July unrest. File image.
Image: Mluleki Mdletshe

The KwaZulu-Natal government wants to use sporting, arts and cultural events to address racial tension in the province.

The announcement was made at a sitting of the provincial executive council on Wednesday.

The executive council said in a statement that it had conducted an assessment of the situation in the province.

“The provincial exco noted that there is strong need to enhance unity and social cohesion after the civil unrest and racial tension.

“The executive council resolved to adopt the 365-day social cohesion and moral regeneration programme as part of building a united and a peaceful province.

“To breathe life to this commitment the provincial government resolved that commencing with heritage month, society will be mobilised around socially cohesive and uniting programmes.

“These will include arts, culture, heritage and sports as an instrument of building a united province.

“KZN will also hold Heritage Day under the #We Are One banner, which is a call for unity across the cultural divide and focus in areas considered hotspots for tensions.

“Sporting tournaments will be organised to foster a common nationhood and to help lower the tensions.”

Last month Sunday Times Daily reported that efforts were being made to heal two “broken” communities in the greater Phoenix area and surrounding Amaoti, Inanda and Zwelisha.

These communities have been divided by hate speech and acts of violence that emerged during and after the recent civil unrest in KwaZulu-Natal and Gauteng.

Tensions flared between Indians and Africans over killings that took place during the unrest.

Anglican bishop and human rights activist Rubin Phillip is at the forefront of efforts to mend divisions and bolster race relations as deputy chair of the moral regeneration and social cohesion council.

The council — headed by premier Sihle Zikalala — is part of a push by government, religious leaders and civil society to end racial tension and restore stability.

Phillip said the main objective was to “get people together, especially across the racial divide”.

The lives of thousands of workers in KwaZulu-Natal who were already barely surviving have been upended, either by losing their jobs or having to ...
News
8 months ago

"Talks alone are not going to help. There needs to be a willingness from the government side to address the imbalances in the economic sector as it ...
Politics
9 months ago

Three Phoenix men who face murder charges after civil unrest in parts of KwaZulu-Natal last month have abandoned their application for bail.
News
9 months ago