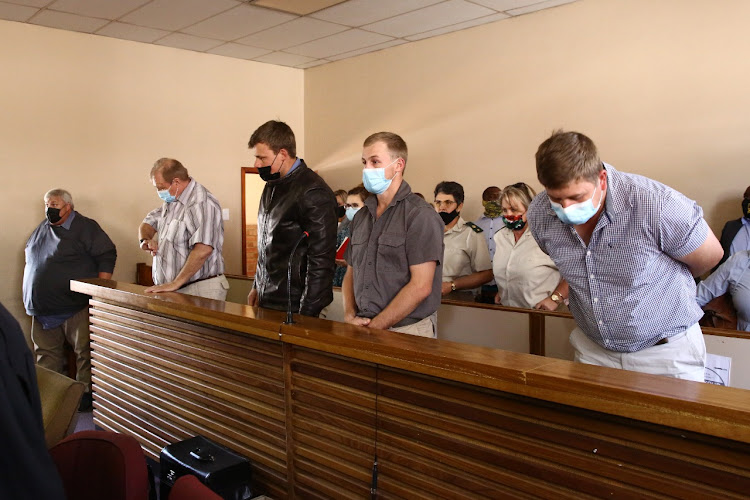 Five farmers from the Free State district of Parys are being sentenced in connection with the deaths of farmworkers Simon Tjixa and Simon Jubeba.
Image: Thapelo Morebudi / The Sunday Times

One of five Parys farmers awaiting sentencing in connection with the deaths of two farmworkers has offered R20,000 in compensation to each family.

This emerged as judge Corne van Zyl considers submissions made by the defence lawyers this week.

The brutal beating of Simon Tjixa and Simon Jubeba in January 2016 at the hands of a large group of farmers, and subsequent transport across a rough road to hospital in a police van, was immortalised in the book These are not gentle people by BBC journalist Andrew Harding.

They had been accused of accosting the Van der Westhuizen patriarch, the since-deceased Loedie van der Westhuizen, and a message of “farm attack” went out, with neighbours setting out in pursuit of the two men. An alternative narrative sketched in the book was that Jubeba had gone to the farm to try to get wages he believed he was owed. The pair died later in hospital, days apart.

Sentencing proceedings against five farmers convicted of killing two farm workers in 2016 have been postponed to September 9.
News
9 months ago

During the presentations of the pre-sentencing reports on Thursday, the defence told the Parys court that Van der Westhuizen senior had offered to pay R20,000 compensation to each family on behalf of all the accused.

The judge adjourned proceedings on Friday, saying she wanted clarity on this submission as the legal team had quoted a section in the Criminal Procedure Act that applies for loss of property or malicious damage to theft, or even theft.

“Why must accused I carry the burden of paying the compensation?” the judge asked the defence.

In response, the defence said this was a kind gesture on his part as he was in a better financial position than the rest and they appreciated his offer.

The state, however, said it wanted direct imprisonment.

Andrew Harding's compelling book about a small-town crime and its consequences is shortlisted for the Sunday Times CNA nonfiction prize.
Books
10 months ago

A nation at odds with itself

Sometimes it takes an outsider to map out the underlying patterns in a community riven by rage, despair and confusion
Books
1 year ago

At dusk, on a warm evening in 2016, a group of 40 forty men gathered in the corner of a dusty field on a farm outside Parys in the Free State. At ...
Books
1 year ago