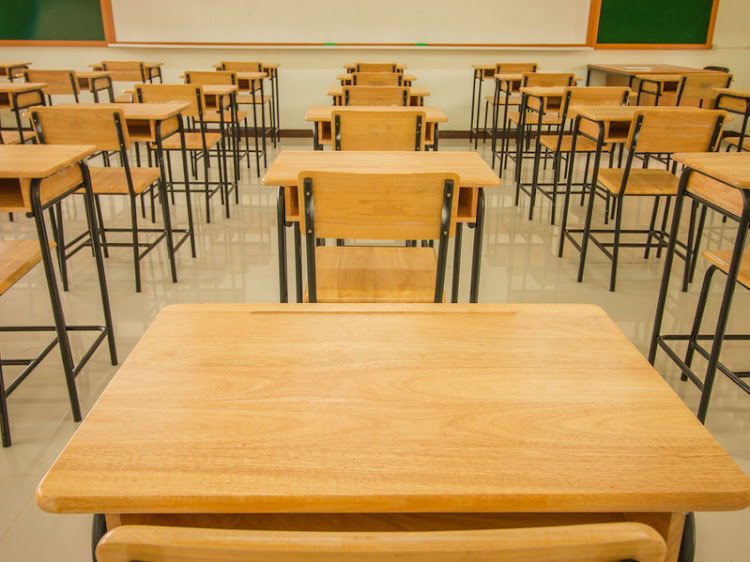 A Pretoria teacher has been fired for having an intimate relationship with a matric girl.
Image: 123rf/smolaw11

A teacher who had an inappropriate sexual relationship with a pupil earned a harsh rebuke before being fired this week.

"It is almost certain that he would be willing to continue the relationship with [the pupil] or other learners at other schools, should he be given the opportunity to do so," said Hawyes, declaring Phiri unsuitable to work with children.

He said the father of three had been "arrogant, demeaning and supercilious" at the disciplinary hearing, and made similar remarks about the pupil after she testified on Phiri's behalf.

He said she adopted an "arrogant, high-handed" attitude and "much of her testimony consisted of making extreme demands to the extent of trying to push the commissioner into a corner to accept her assertions and call for apologies".

Intimate photographs of the learner with Phiri were part of the evidence against the Akasia teacher, and a fellow matric pupil at Amandsig Secondary School testified that the girl bragged about their relationship and shared pictures of herself and Phiri on WhatsApp.

A school principal who touched a pupil's buttocks and breasts in his office and two teachers who had improper relationships with a Grade 12 girl have ...
News
3 months ago

The girl testified that the Gauteng education department official who investigated Phiri interviewed her without her parents' permission, tried to force her to make a written statement and threatened that if she did not implicate Phiri she would be prevented from writing matric.

She said she felt uncomfortable, traumatised and terrified, claiming she became a laughing stock at school and teachers mocked her.

But the department handed Hawyes an affidavit from the girl's parents which acknowledged their daughter treated fellow pupils and teachers in a "rude and vile" manner.

"The parents consented to any necessary disciplinary measures available and mentioned that they were aware of her attitude as it is also experienced at home," said Hawyes.

Phiri denied having a sexual relationship with the girl and claimed Amandsig Secondary principal Sanet Jacobsz engineered the disciplinary inquiry because they had a strained relationship.

But Hawyes said the investigation began after two matric pupils told the principal about the relationship when the girl threatened them, and Jacobsz immediately referred the matter to the district office.

"I find no evidence that Jacobz interfered in the process or elicited the learner witnesses to make statements and testify against the employee. Any clashes that Jacobz may have had with the employee in the past clearly did not provide the genesis for these charges," he said.

A teacher has been fired after a disciplinary hearing was told he made his wife and a schoolgirl pregnant simultaneously.
News
3 months ago

Hawyes said the girl was "immature, arrogant and foolish enough to post details of her relationship with the employee on WhatsApp where it was visible to [other pupils]".

He added: "[Phiri] was arrogant and over confident to allow her to post on the basis that there was insufficient evidence for the employer to connect all the dots.

"The photos and the other circumstantial evidence prove beyond all doubt that [the girl] and [Phiri] were in an intimate relationship."

In his decision to fire Phiri, said Hawyes, he had taken into account the consensual nature of the teacher's relationship with the girl.

However, it was also "brazen and entered into with full knowledge that it was contrary to the provisions of the Employment of Educators Act and a number of other education policies. It seems probable that the relationship between the two of them is ongoing."

Having left school without writing matric in 2020, the girl had returned and Phiri was still teaching there.

"This is an undesirable situation and provides a poor example of appropriate conduct to other learners. In fact it might create the impression that relationships between educators and pupils at school are the norm and should be accepted," he said.

A teacher at a Northern Cape high school has been fired and banned from working with children after a disciplinary inquiry found him guilty of the ...
News
4 months ago

A lecturer who was fired for advising a student who failed maths to "think like a girl" if she wanted a pass mark has had his reinstatement bid ...
News
4 months ago

A headmaster who was fired after grabbing a school governor's buttocks then offering her R3,000 to keep quiet about the incident has failed in his ...
News
4 months ago