Fire raging near Lanseria airport but flights not affected 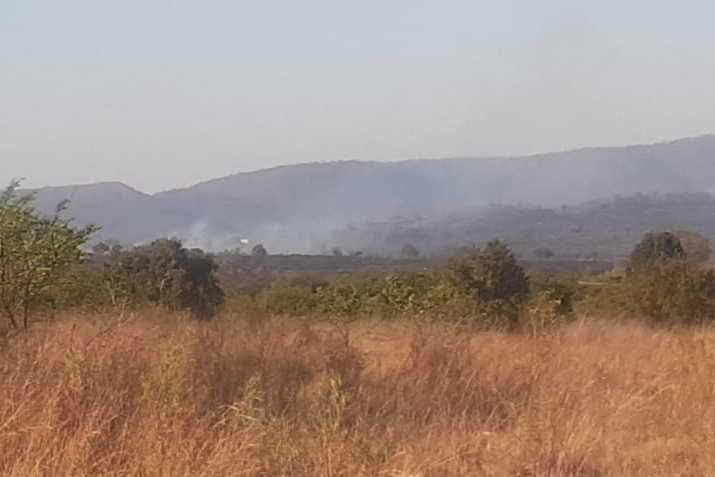 A fire near Lanseria International Airport has caused the redirection of traffic and affected the nearby Lion & Safari Park.
Image: Thapelo Morebudi

A fire raging near Lanseria International Airport and surrounding areas on Tuesday afternoon caused the redirection of road traffic, while the nearby Lion & Safari Park was on high alert near the border between Gauteng and the North West.

The fire, which broke out halfway between the airport and Hartbeespoort Dam, is being extinguished, with reports that the Lion & Safari Park in the Pelindaba area is of moving animals to safer areas.

Mike Christoph, operations manager at the airport, said despite reports on social media that all flights to and from the airport had been halted and the airspace closed, the airport was operating normally.

“There is lots of smoke, which obviously affects low flying,” he said.

However, traffic approaching Lanseria from the Pelindaba nuclear research facility, which lies directly to the north of the field, was being rerouted 30km to the west.

Even if the fire did reach the airport, the perimeter is surrounded by wide and well-maintained fire breaks, he said.

The Lion & Safari Park was not able to give extensive comment on the situation due to the team attending to the emergency.

Neil Hosken, who lives about 7km from where the fire started, said there appeared to be two fires coming from different directions.

“The wind keeps fuelling the fire. We don’t know how it started. It’s still being put out. All we see is smog in those areas,” he said.

No risk of load-shedding after Kendal power station fire: Eskom

Units 2 and 3 at the Kendal power station will be returned to service early this week and unit 1 will be back in November, Eskom said on Monday.
News
4 months ago

The newly appointed deputy minister of agriculture, rural development and land reform, Zoleka Capa, was among guests at the hotel.
News
4 months ago

Farmers said many of their animals had perished in the flames.
News
4 months ago