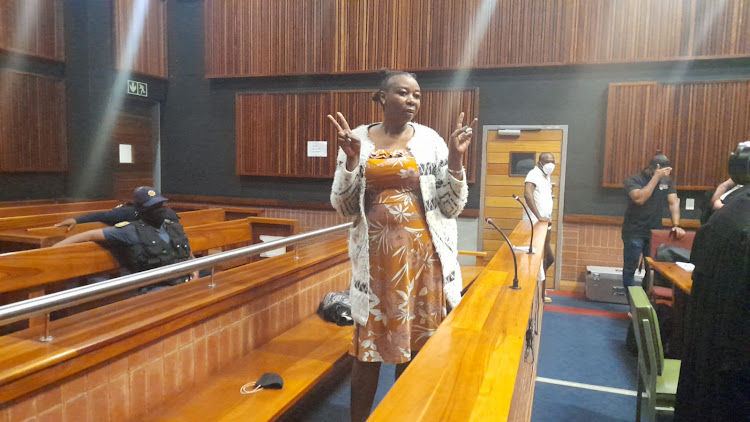 Nomia Rosemary Ndlovu poses in the high court in Palm Ridge before she takes to the stand to defend herself in a multiple murder trial.
Image: Naledi Shange/TimesLIVE

“I am fine and ready for today. I am beyond well.”

These were the words from former police officer Nomia Rosemary Ndlovu  moments before she took to the stand in the high court sitting in Palm Ridge, where she was due to start giving her testimony.

The former constable put on a spectacle for the media contingent ahead of her appearance, placing her hands on her hips, fanning herself and asking whether they were satisfied with the images they were capturing of her.

“Who knew Rosemary Ndlovu would one day be a celebrity,” Ndlovu joked in XiTsonga when addressing the court interpreter.

“I woke up early to put on make-up for you,” Ndlovu joked to the reporters.

This was a different persona from what she had presented in previous court proceedings, when she entered court and kept to herself, speaking only to the court orderlies and her lawyers when necessary.

Officer Nomia Rosemary Mkhize poses for the media in the high court in Palm Ridge. This was ahead of her taking to the dock to testify in her defence. She is accused of a string of charges, including the murder of 6 of her relatives + her boyfriend for insurance cash. @TimesLIVE pic.twitter.com/eCFtjdlZMP

The former law enforcement officer, who was based at the Thembisa South police station in Ekurhuleni,  has since taken to the dock to deliver her evidence-in-chief.

She will answer to allegations that she killed family members and her boyfriend, so she could cash in on insurance claims.

She is alleged to have also tried to kill other family members, including her sister and her five children, her mother and her niece.

Ndlovu was arrested after an alleged hitman, Njabulo Kunene, turned to police, informing them that Ndlovu had allegedly recruited him to kill her sister and children by setting alight their house in Bushbuckridge.

The police set up a sting operation which ultimately led to Ndlovu being caught on camera, detailing what she wanted done.

As Ndlovu’s defence kicked off, her lawyer zoned in on how she had met with the alleged hitman, Kunene.

Ndlovu has told the court she had met Kunene in December 2017 when she was visiting her friend, Cebisile Kunene.

TimesLIVE has received shocking exclusive undercover footage showing a former policewoman, Nomia Rosemary Ndlovu, casually explaining to an undercover cop and hitman how to kill her sister and her sister's five young children in order to receive the funeral and life insurance policies she had taken out on their lives. Ndlovu is accused of murdering six people, five of them being family members and one being her boyfriend, for money.

“Cebisile and I hung around together and also spoke about how to raise money we wanted to spend at Emperor’s Palace [a casino complex],” said Ndlovu.

She said while they sat there, Njabulo arrived.

“As Cebisile and I continued with our discussion, this gentleman stared at me. It seemed as though he was drunk. During that time, the gentleman spoke to me and said in IsiZulu: ‘You  look familiar to me’. I told him I do not know him. He said I had arrested him while I was with a male police officer. I told him I did not remember him. He said he had he lived in a squatter camp in Vusimuzi and during that police operation, firearms were discovered under the bed,” Ndlovu told the court.

It was then she learnt this man was Cebisile’s brother.

Ndlovu and her friend continued with their conversation while Cebisile made calls to several people to try to raise the funds.

“In that discussion, as we were trying to raise money, I told her about Nomasonto and the situation I had with her. I had in the past taken Nomasonto to a Mr Madonsela, a loan shark, but she never paid back that money,” Ndlovu said.

Nomasonto is also known as Gladys Ndlovu and is related to Ndlovu. While the court refers to Nomasonto as Ndlovu’s sister, she said she was her aunt.

“I then told Cebisile I needed to call Nomasonto and ask if she had the money she was meant to pay to Mr Madonsela. I called Nomasonto and asked her whether she was home. She said she was,” Ndlovu told the court.

Njabulo was listening to the conversation and offered to get them transport to Nomasonto’s house as it was too hot to take a taxi. They agreed.

Ndlovu said Njabulo left and came back a short while later in a car. In the vehicle, there was the driver and another man, Lakhiwe Mkhize. They boarded the car and headed to Ndlovu’s sister home in the Phomolong section.

Ndlovu said she asked the driver to stop a short distance from her sister’s house and she and Cebisile walked to the house. She had wanted the men to stay behind out of respect for her sister’s husband, who would not take kindly to having her bring men to their home.

It is, however, Njabulo and his friend Mkhize’s evidence that the drive was taken so Ndlovu could point out her sister’s house. They claimed this was after Ndlovu had recruited them, saying she had a job for them. The job, they claimed, was for them to kill Nomasonto.

Investigating officer listened as Ndlovu requested a sign-off on policy documents which would ultimately see her cash in on thousands of rand after ...
News
9 months ago

Former cop Nomia Ndlovu has pleaded not guilty to 20 charges ranging from murder, attempted murder to fraud
News
9 months ago

A woman who allegedly narrowly survived being killed by her sister is on Wednesday expected to take the witness stand in the high court sitting in ...
News
9 months ago