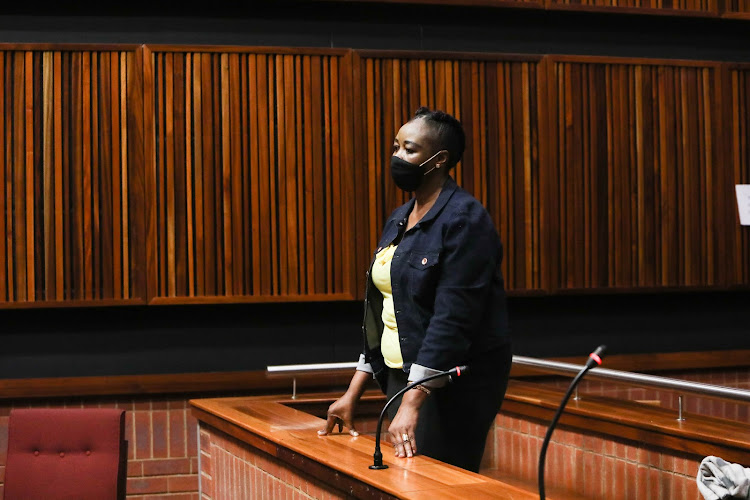 Former police constable Nomia Rosemary Ndlovu has pleaded not guilty to charges of killing six of her relatives to cash in on funeral and insurance policies.
Image: Alaister Russell/The Sunday Times

When former police officer Nomia Rosemary Ndlovu took to the stand for the first time on Tuesday, Zanele Motha’s partner was sitting in the court gallery.

Motha is one of six people who Ndlovu stands accused of killing. Five of her alleged victims were her relatives and one was her boyfriend.

Jabulani Nhlapo attended the high court proceedings in Palm Ridge, hoping to hear from Ndlovu how the mother of his three children died while visiting her in June 2016. 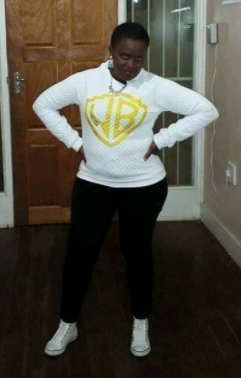 Motha was Ndlovu’s niece. She was found severely injured on the side of a road in Kempton Park.  She was declared dead on arrival when she was admitted to the Arwyp Medical Centre in Kempton Park.

Nhlapo told TimesLIVE seeing Ndlovu on trial “disturbed me so much”.

“It brought back all those memories, the pain, from when Zanele died,” he said.

Ndlovu and Motha had lived together in Daveyton with his relatives and their three children.

“Zanele had a house which had been left for her by her father. She was very young when her father died . Back then, it seemed the family had decided Ndlovu’s brother should occupy the house until Zanele was grown. Now that our family had grown and we needed our own place, Zanele had started communicating with her aunt with the hope she could assist in getting the house back,” said Nhlapo.

It was this sudden communication that Nhlapo believes led to Motha’s death.

“I told her it didn’t sit well with me. I couldn’t understand why she had done this,” he said.

The state has alleged Ndlovu opened three separate policies covering Motha in January, March and May 2016.

The court also heard that two days before Motha’s death, while visiting Ndlovu’s house, she was admitted to the Thembisa General Hospital for abrasions to her face. She told the doctor who examined her that she had been struck by a bicycle.

A woman who was allegedly killed by her aunt, police constable Nomia Rosemary Ndlovu, had allegedly sustained suspicious injuries and reported to ...
News
11 months ago

Two days later, she turned up at the Arywp medical facility badly injured. Her post-mortem stated she had suffered four fractured ribs and damage to her liver. It was suspected she may have been a victim of a brutal assault.

“We never got an explanation about what happened and it always bothered me. At the mortuary when we went to see Zanele’s body, we could not really do so because Ndlovu was there. We saw her through the glass at the mortuary and afterwards Ndlovu took all the forms and documents,” said Nhlapo.

The state alleged that Ndlovu cashed in almost R120,000 after Motha’s death.

Nhlapo said when Motha sustained her first injury, she had not given him the full details.

“She said something about being struck by a car. What disturbed me was after she was discharged from hospital, I tried calling her but Ndlovu answered her cellphone. She told me she was at work and had left Zanele at home. I was confused about why she would take Zanele’s phone, knowing she was injured, and leave her alone without a phone,” said Nhlapo.

Investigating officer listened as Ndlovu requested a sign-off on policy documents which would ultimately see her cash in on thousands of rand after ...
News
11 months ago

After Motha’s first injury, a concerned Nhlapo told Ndlovu that he would fetch her and take her back to their Daveyton home. But later that evening, when he wanted to reach Zanele, her phone was off. Nhlapo said he had no idea where Ndlovu’s house was.

“She [Ndlovu] was the one who told me Zanele had left us,” said Ndlovu.

When police arrested Ndlovu two years later on an unrelated charge, they headed to her house to conduct a search. It was here they found Motha’s file from the Thembisa hospital, which was never meant to leave the hospital.

On Tuesday Ndlovu said she had no idea how the file arrived in her home.

She is yet to testify fully about Motha’s visit to her house.

So far, she has touched on the death of her sister Audrey Ndlovu, who she is also accused of killing.

It is the state’s case that Ndlovu had gone to Audrey’s house a day before she was found dead. It is alleged she sent her sister to buy bread and while she was away, she laced her tea with a harmful substance. The state believes Audrey came back, they shared a meal together and Ndlovu left, thinking Audrey would soon die. The state believes Ndlovu came back later that day to find her sister alive and strangled her to complete the job.

Was it desperation or greed that led a former police officer to allegedly murder six people on whose lives she had policies?
News
11 months ago

It is the state's version that she left her sister’s body under a blanket and returned the next day, raising the alarm with neighbours that her sister had disappeared. When police were called and the security gate at Audrey’s rented room was sawed open, her body was found.

Ndlovu, who had earlier been jovial and joked with the media, wept on the stand when she spoke about her sister’s death.

“I remember Sgt Mabale led the way into the room. We could see there was a figure on the bed. Mabale removed the blanket from the bed, not completely, and asked me to step back. It was then I figured something was wrong with my sister,” said Ndlovu.

She claimed she walked into the room and leant against a cupboard, causing two cups to fall.

“I picked up the cups and put them in a wash basin outside,” said Ndlovu.

It’s the state’s case that this move was Ndlovu’s attempt to destroy evidence. It is believed one cup had traces of the substance used to poison Audrey.

It is the state’s case that Ndlovu took the cups outside, despite being warned by a police officer to leave the cups as they were potential evidence. The state claimed Ndlovu ignored the instruction by Sgt Phindile Shilubane and submerged the cups in water.

For this, she has been charged with defeating the ends of justice.

Former cop Nomia Ndlovu has pleaded not guilty to 20 charges ranging from murder, attempted murder to fraud
News
11 months ago

Ndlovu told the court: “At the time, I was confused as I could see something was amiss with my sister. I didn’t hear Sgt Shilubane telling me this.”

The former police officer has also denied evidence presented by a neighbour that she saw Audrey returning from the shop with bread.

“Audrey never went to the shop. She said she would collect bread from Tom’s house by going through an opening next to the outside toilet,” said Ndlovu.

Tom was Audrey’s boyfriend who lived in a house situated at the back of the yard.

Ndlovu claimed that while Audrey was away, she was not in her room.

“When Audrey left, I sat on the veranda. It was cold so I was soaking in the sun,” said Ndlovu.

The case continues on Wednesday with Ndlovu returning to the stand.