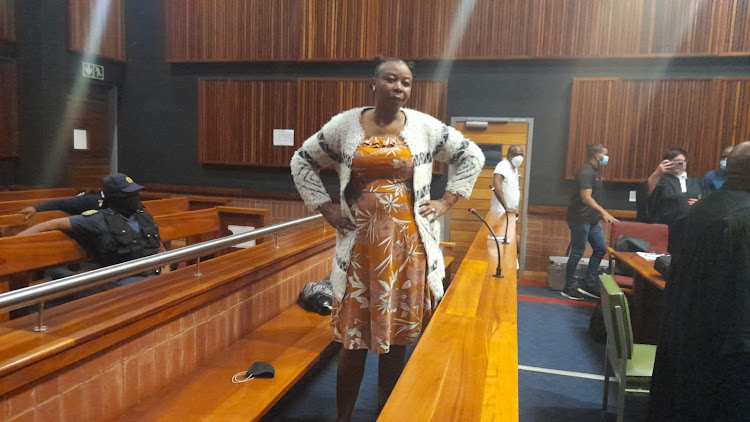 Nomia Rosemary Ndlovu says she recounted what the alleged hitman had told her to say, in the now-infamous video footage.
Image: Naledi Shange/TimesLIVE

Former police constable Nomia Rosemary Ndlovu appeared in the high court in Palm Ridge, Gauteng, this week to give testimony in her murder trial.

Ndlovu has been accused of a string of crimes, including killing six people to cash in on life insurance policies.

The former police officer is also facing charges of fraud and defeating the ends of justice.

Here are five must-read stories on the case:

She worked at the Thembisa police station at the time of her alleged killings and arrest.

She faces 20 charges including murder, fraud, obstruction of justice and conspiracy to commit murder.

A woman who was allegedly killed by her aunt, police constable Nomia Rosemary Ndlovu, had allegedly sustained suspicious injuries and reported to ...
News
2 months ago

Who Ndlovu allegedly killed and attempted to kill

Ndlovu is accused of allegedly killing her cousin Witness Madala Homu in 2012, her sister Audrey Somisa Ndlovu in 2013, her lover Maurice Mabasa in 2015, her niece Zanele Motha in 2016, her nephew Mayeni Mashaba in 2017 and another nephew Brilliant Mashego in 2018.

Mabasa's body was discovered in Olifantsfontein with more than 80 stab wounds. His attackers did not take his wallet and money.

Before being found dead, he had cheated death twice during his relationship with Ndlovu.

Ndlovu is also accused of allegedly attempting to kill other family members, including her mother.

So rocky was their relationship, he resorted at times to sleeping in his car.
News
2 months ago

Ndlovu cashing in on policies

For Audrey’s death, Ndlovu allegedly claimed more than R700,000 insurance. She allegedly called the insurance companies while posing as Audrey and it was then that she listed herself as a beneficiary of Audrey’s policies.

Ndlovu allegedly cashed in about R120,000 in policies for Motha. She did not assist the family when it came to burial costs.

It was unclear whether she claimed on any policies after the deaths of Mashego and Mashaba.

While more gruesome evidence was revealed in court of how Ndlovu allegedly orchestrated the murders of her loved ones, she denied playing a role in their deaths.

However, she maintained her innocence, saying the alleged plot was all an act.

“Yes, you heard me correctly. That is what I said. I was giving those answers in the clip but I was responding in that manner because I was told that is how I am meant to reply even for that day,” she said.

Ndlovu's behaviour in court this week left a bad taste in many people's mouths.

The former constable put on a show for the media ahead of her appearance. In videos shared online, she was seen placing her hands on her hips, throwing peace signs, fanning herself and asking whether they were satisfied with the images they were capturing of her.

She was even heard telling the media she put on makeup for them.

“Who knew Rosemary Ndlovu would one day be a celebrity?” she joked in Xitsonga through the court interpreter.

“I woke up early to put on make-up for you,” former police officer Nomia Rosemary Ndlovu said jokingly to reporters.
News
2 months ago

More undercover footage has been revealed of a former Thembisa police officer allegedly telling a hitman how to kill her sister and her sister’s five young children on March 7 2018. Here is the first part of our video series explaining how Nomia Rosemary Ndlovu was caught on camera:

More undercover footage has been revealed showing alleged “killer cop” Rosemary Ndlovu telling a hitman and an undercover cop how easy it is for her ...
News
2 months ago

The couple had been cohabiting at the time of Maurice Mabasa’s murder and had been together for four years.
News
2 months ago

When former police officer Nomia Rosemary Ndlovu took to the stand for the first time on Tuesday, Zanele Motha’s partner was sitting in the court ...
News
2 months ago