Image: 123RF/Przemyslaw Koch Three sisters under the age of 10 have been found dead in New Zealand, shortly after the family emigrated from South Africa.

Twin girls aged three and their seven-year-old sibling have been found dead in a New Zealand town.

Their mother - an SA doctor - has been admitted to hospital, where she is in a stable condition, reports New Zealand media, quoting Det Insp Scott Anderson.

A homicide case is under investigation with police saying at a media conference they were speaking with people from the property and no-one else was wanted in connection with the incident.

The family had arrived in the country in late August and only recently left a Covid-19 quarantine facility.

Their father, also a doctor, had arrived home to find his daughters dead, and had alerted neighbours. Stuff.co.nz reported he was heard screaming and crying, saying, “Is this really happening?”

Emergency services were alerted shortly after 10pm on Thursday night, reports TVNZ, quoting police as saying the family had only arrived in the town a week ago to work as medics. 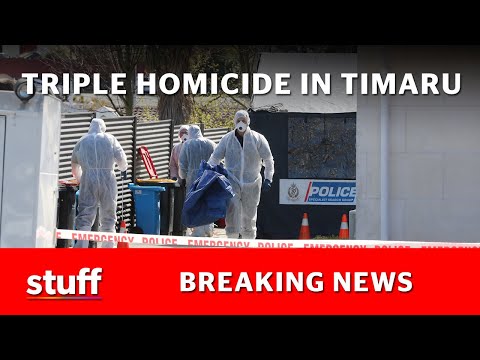 The property involved is believed to be used as housing for staff at the hospital.

“Our hearts are breaking for their family back in SA and around the world who will wake up to this terrible news,” Reynecke​ said.

Tributes, along with flowers and a soft toy, were left at the entrance to the property.

In a police statement issued overnight, Anderson said: “Police remain at a property in Queen Street, Timaru, today, after three people were located deceased at the property last night. Police can now confirm that the deceased were children and siblings - two aged three, and one aged seven.

“Emergency services also located a woman at the property. She was transported to Timaru Hospital and is in a stable condition.

“Those involved arrived in Timaru from SA in the last week.

“The investigation into this tragedy is still in its very early stages, but we can confirm that nobody else is being sought in relation to the deaths of the three children.

“Police are still working to notify all next of kin, and for that reason - and to protect the privacy of those impacted by this tragedy - at this stage police will not be releasing further details regarding the victims.”

Aoraki area commander Insp Dave Gaskin said: “While the family involved are recent arrivals to Timaru, we know that this incident will be incredibly distressing for Timaru residents ... Police are working with our partner agencies to ensure that support is wrapped around those most directly affected by the tragic events of last night, and the wider community, and we urge anyone who needs support to reach out.”