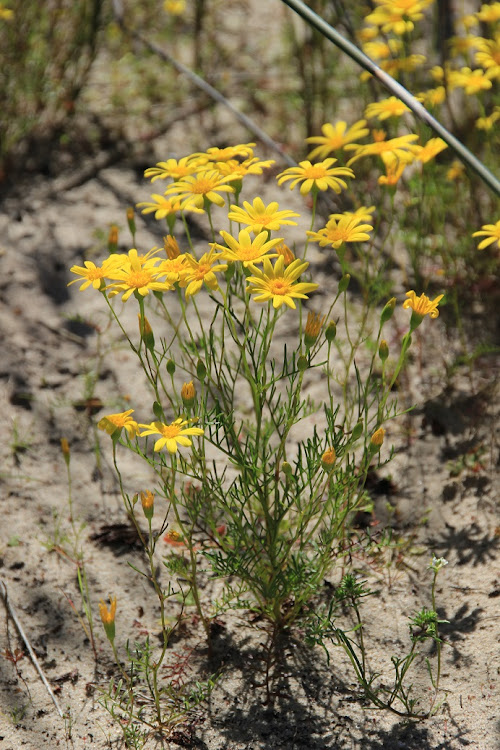 Steirodiscus tagetes, which was believed to be extinct in the late 60s, still survives in some parts of the Cape nearly 55 years later.
Image: Supplied

Years of urban expansion have caused many indigenous plants to become either endangered or extinct, but a Cape Flats sand Fynbos, Steirodiscus tagetes, has stood the test of time.

The University of the Western Cape’s (UWC's) environmental education officer and conservation photographer Laurenda van Breda said that through concerted efforts by conservation organisations such as Custodians of Rare and Endangered Wild Flora (Crew) and plant enthusiasts posting to the social media platform of naturalists, scientists and biologists, iNaturalist, Steirodiscus tagetes has been recorded in at least three locations on the Cape Flats, including Diep River Corridor, Zandvlei Estuary Nature Reserve and Steenberg between 2018 and 2020.

“This 34ha private nature reserve is one of the locations for Steirodiscus tagetes, but has not as yet officially been recorded as a location,” said Van Breda. “Steirodiscus tagates was once one of the dominant species at UWC, dominating the open spaces below our dunes.

“It is still here since its first record in 1967,” Van Breda said. “With the vegetation on the Cape Flats being so threatened and fragmented, the importance of protected areas on the Flats becomes clear.”

According to the South African National Biodiversity Institute's (Sanbi's) Red List of South African Plants assessment in 2016, the population of this formerly widespread and common species has been much reduced by habitat loss to urban expansion on the Cape Flats, “where it is now locally extinct, except for one small subpopulation occurring in a nature reserve near Milnerton”.

According to Sanbi's 2016 assessment Steirodiscus tagetes “possibly still persists on the False Bay coast near Macassar, but its habitat is severely degraded and rapidly disappearing due to urban expansion as well as spreading informal settlements”.

The design of The Fynbos, the first of its kind on the continent, is based on Table Mountain
News
1 month ago

“It was last recorded in this area in 1995. Large subpopulations still occur on the West Coast near Atlantis and Koeberg, and a smaller subpopulation was recently recorded at St Helena Bay. This species is highly likely to occur in the West Coast National Park near Langebaan, where it is known from historical records. Habitat loss to urban expansion is the most severe threat to this species, and has already caused the loss of more than half of known locations,” Sanbi noted.

Van Breda said: “This vulnerable plant has proven to be a tenacious survivor in its dwindling habitat. SA has more than 20,000 plant species, 60% of which occur nowhere else in the world.  With the highest species diversity, it is unfortunately matched by the highest plant extinction rate.”

About 37 plant species in this region had been declared extinct, with another 64 believed to be extinct.

These fragrant beauties have potent health benefits when used in simple aromatherapy-based preparations. Grown them in your garden or in pots
Lifestyle
6 months ago

Stop digging if you want your veggie garden to thrive

'Plants cannot thrive in such soils, or take up water and certain essential nutrients,' says Dr Ailsa Hardie of the department of soil science at ...
News
5 months ago