According to the 2021 'Analysis of Corruption Trends' report, in the first half of 2021 a total of 1,964 whistle-blowers approached Corruption Watch to report acts of corruption. Stock photo.
Image: 123RF/Olivier Le Moal

Whistle-blowers have reported to Corruption Watch nearly 2,000 alleged acts of corruption in SA during the first half of the year, across the public and private sectors.

Abuse of power and extortion by the police, sextortion by school principals and ongoing  Covid-19-related graft feature prominently in complaints received by the non-profit organisation which provides a platform for reporting corruption.

The 2021 “Analysis of Corruption Trends (ACT)” report was released on Wednesday.

The fifth instalment of the report “shows the violence with which ordinary civilians are met on a daily basis, sometimes at the hands of the very protectors of the law that is the police service”, the organisation said.

Most of the reports about police corruption were received in Gauteng (46%), the Western Cape (16%) and KwaZulu-Natal (8%).

According to the report, the most common forms of corruption were abuse of authority (37%), dereliction of duty (34%) and bribery (22%).

The Special Investigating Unit has been granted an order to freeze R7.9m held in the accounts of a service provider and contractor who won tenders ...
News
3 months ago

Most of the Covid-19 complaints related to issues with the temporary employer/employee relief scheme (Ters), then procurement corruption in the health and education sectors, and corruption in relation to the distribution of food parcels.

Breaking down this category, most allegations referred to issues of maladministration (25%), procurement corruption (18%), abuse of authority (17%) and bribery (6%).

In the education sector, a number of whistle-blowers in Gauteng (37%), the Eastern Cape (15%) and Limpopo (11%) reported alleged corruption in public schools.

Whistle-blowers pointed out alleged frequent abuse of authority by principals and chairpersons of school governing bodies as a major concern. 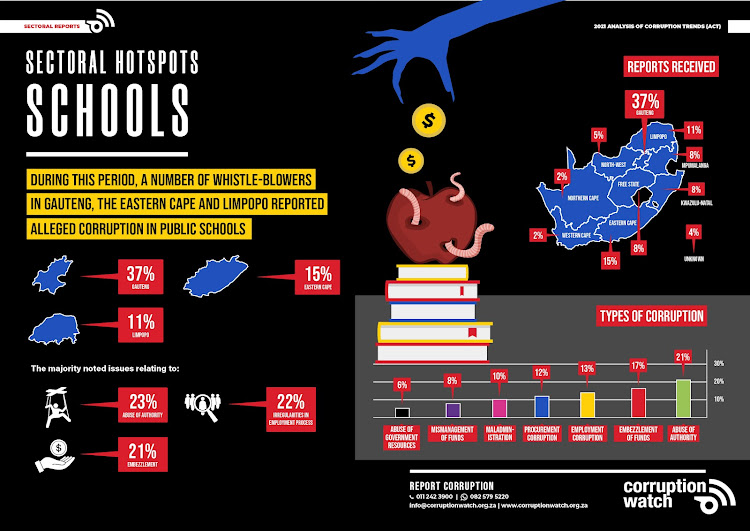 “More disturbing complaints recount instances of principals operating outside the regulations of their provincial departments by hiring unqualified teachers and soliciting sexual favours from temporary teachers to safeguard their jobs,” said Corruption Watch.

“A school principal in Johannesburg is alleged to have colluded with the school’s governing body to hire unqualified teachers. The complainant further alleges that attempts to get an educators’ regulatory body involved have failed.

“Another school principal, of a special needs school in Gauteng, is alleged to be misusing school funds and threatens educators who raise concerns, telling them that they will not get permanent placement at the school.

“In other incidents reported, school principals are accused of having offered permanent employment to prospective teaching and administrative staff in exchange for sexual favours. For fear of victimisation within the sector, many of these cases go unreported.”

In relation to Ters and Covid-19 relief, most corruption allegations emerged from Gauteng (35%), the Eastern Cape and Western Cape (both at 13%) and KZN (12%).

“Reporters mainly alleged that their employers were abusing the Ters grants by either partially paying them or not paying them at all,” the report stated.

The latest survey conducted by Afrobarometer has revealed 64% of South Africans think corruption has worsened during President Cyril Ramaphosa’s ...
News
4 months ago

The report revealed that Gauteng (58%) and the Western Cape (11%) emerged as hotspots of public housing corruption. Most whistle-blowers exposed irregularities in the allocation of RDP houses, fraud in relation to the housing waiting lists, and abuse of authority.

Melusi Ncala, researcher at Corruption Watch and author of the report, said the vulnerability of whistle-blowers needed to be addressed as a matter of urgency, while highlighting the death of Babita Deokaran.

Deokaran, who worked in the Gauteng health department’s financial office, was a whistle-blower in a Special Investigating Unit (SIU) probe into R332.5m worth of Covid-19 personal protective equipment procurements that were allegedly irregularly awarded. She was gunned down last month outside her home in southern Johannesburg.

“When reading the individual accounts of corruption, it is evident that the more things change the more they stay the same,” Ncala said.

“Communities are vulnerable because police officers care more about securing dodgy deals with criminal networks. Learners in schools and patients in health facilities are at the mercy of self-serving and abusive officials.

“This continues to be the story of corruption in SA, according to almost 2,000 brave whistle-blowers.”

SA has enough existing laws to deal with the protection of whistle-blowers, but more should be done to incentivise people to come forward and help ...
News
3 months ago

President Cyril Ramaphosa came into office in February 2018 vowing to bring the perpetrators of state capture to book, wage relentless war on ...
Opinion & Analysis
3 months ago

Gauteng premier David Makhura says the protection of whistle-blowers and witnesses is receiving urgent attention at a national and provincial level.
News
4 months ago