The Safair Boeing 737-400 involved in a near-miss with a light aircraft flown by a student pilot at East London airport on August 25 2021.
Image: SA Civil Aviation Authority

A jet with 164 people on board came within 30m of disaster when a student pilot at the controls of a light aircraft mixed up “left” and right”.

A near-miss involving the two planes, which happened at King Phalo Airport in East London on August 25, emerged this week in an SA Civil Aviation Authority report.

The regulator launched an investigation after the pilot of a Safair Boeing 737 carrying six crew and 158 passengers from Cape Town reported a near collision when the plane was landing at 7.25am.

The preliminary serious incident report said an air traffic controller twice ordered the 33-year-old student pilot to turn right to avoid a collision with Safair 142, but he turned left instead and came within 30m of the jet.

The Piper Cherokee from 43 Air School in Port Alfred which was involved in the near-miss with a Safair jet at East London airport on August 25 2021.
Image: SA Civil Aviation Authority

The pilot, identified in the report as a Ghanaian with “expert” English skills, was on a solo navigational training flight from Port Alfred in a four-seater Piper Cherokee owned by 43 Air School.

In the sober words of the CAA investigator, the pilot's “deviation from instructions led to loss of separation between the aircraft”.

“No injuries resulted from this serious incident and neither aircraft sustained damage.”

An “air proximity” incident is defined as any circumstance where the degree of separation between two aircraft is considered by either pilot to have constituted a hazardous situation involving potential risk of collision. 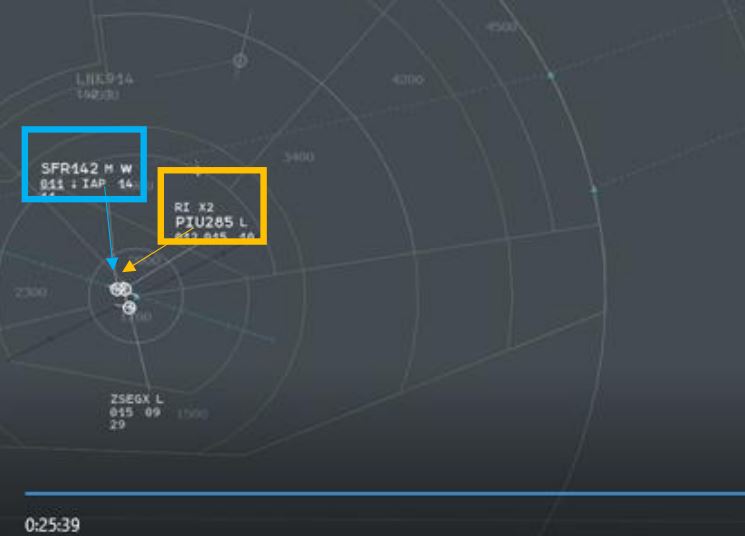 A radar image from the CAA report shows "vertical separation [between the planes] was around 100ft and no lateral separation" at 7.25:39am on August 25 2021.
Image: SA Civil Aviation Authority

The Safair jet would have been flying at around 250km/h when the student pilot passed about 30m directly overhead as the jet made its final approach at around 132m above the ground.

The investigation report said: “Prima 285 was inbound from the north and requested to conduct two touch-and-go landings.”

Air traffic control (ATC) instructed the pilot to go ahead, but at 7.21:48 the Safair pilot reported that his jet was established on the instrument landing system for a landing.

“ATC instructed them to continue with approach. At 7.22:10, Prima 285 was instructed by ATC to turn right and to continue routing north of the aerodrome and to stand by for further instructions; this was to keep the aircraft clear from the final approach path.

“At 7.23:47, ATC instructed Prima 285 to turn right and re-establish on the left downwind for Runway 11. However, the pilot did not read back the ATC instructions correctly; instead of turning right, he turned left towards final approach path of Runway 11.

An investigation is under way after two planes carrying a total of 72 people narrowly avoided a potential disaster at George airport in the southern ...
News
9 months ago

“Safair 142 was advised of the instructions issued to Prima 285 and to continue to land as both aircraft were in sight and Prima 285 was higher.

“Prima 285 flew overhead Safair 142 and the pilot was instructed to orbit and then to report established on final approach for Runway 11. At this time, Safair 142 had landed and vacated the runway.”

The student pilot had 104 hours' flying experience, according to the CAA report, compared with a total of 14,375 hours between the 32-year-old Safair pilot and his 37-year-old co-pilot.

The CAA report said its purpose was not to apportion blame. It added, however: “The ATC recordings and radar files were made available for this investigation.

“Throughout communication between [East London] ATC and both aircraft, there were clear instructions from ATC and correct read-back by the flight officer of Safair 142.

“However, the pilot of Prima 258 did not read back the ATC instructions correctly at some point during communication.”

Six parachutists and the co-pilot were knocked unconscious but survived when their plane crashed at Carletonville Aerodrome, home of the Johannesburg ...
News
9 months ago

Investigation into 'midair collision' that claimed life of parachutist

A skydiver was killed and another injured when they collided in midair in Mpumalanga on Sunday.
News
9 months ago

Investigators probing a helicopter crash into the Umgeni River in Durban say a bird strike was to blame.
News
10 months ago