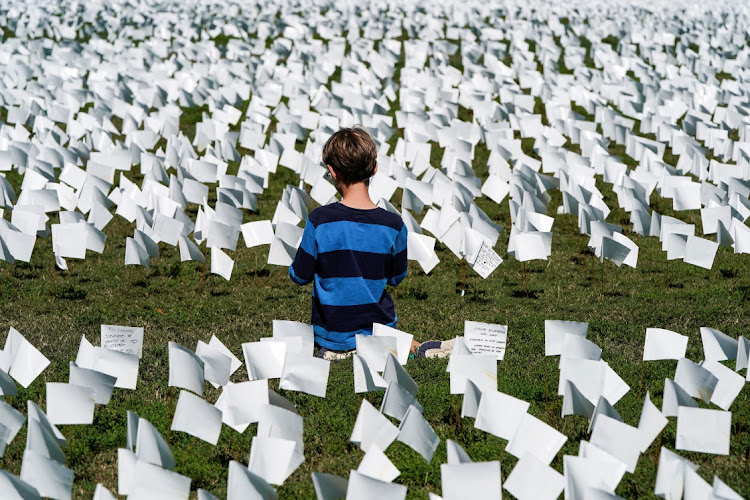 A boy sits among thousands of white flags representing Americans who have died of the coronavirus disease (Covid-19) placed over 20 acres of the National Mall in Washington, US, September 26, 2021.
Image: REUTERS/Joshua Roberts

Information provided by SA scientists to their UK counterparts will be factored into the latter country's decision-making on whether to keep SA on its travel “red list”.

Travellers from, or who travelled through, countries on the red list are required to quarantine at their own expense before being permitted entry into the UK. The SA government, and scientists, have argued that keeping the country on the list does not make scientific sense, and threatened to severely dent the country's already battered tourism sector as the December holidays approached.

In a statement, the health department confirmed that SA scientists met their UK counterparts on Monday “to discuss the latest trends around Covid-19, respective Covid-19 testing strategies, and the prevalence and risk posed to our vaccination programmes by variants of concern”.

'We have exited the third wave,' says NICD as Covid-19 numbers fall

The third coronavirus wave is officially over in SA, the National Institute for Communicable Diseases said on Monday, with just 578 new infections recorded in the past 24 hours.

Of the new cases, only two provinces recorded more than 100 new cases in the past day - an indication that the number of infections was on the decline.

“Nationally we have exited the third wave, according to the current definition. The national seven-day moving average of daily case numbers, positivity rate and testing rate continue to decrease, with sustained decreases seen in all provinces,” the NICD said in releasing its daily virus statistics.

'We have exited the third wave,' says NICD as Covid-19 numbers fall

An anti-mask and anti-vax activist in Durban claimed on Monday that making people wear masks was akin to German ruler Adolf Hitler asking people to wear a star as a form of forced control.

That’s the view of Michael Southwood of the Unity Group, who joined several political parties and anti-vaccination groups during a protest in Durban on Monday, where they threw their masks on to the ground and set them alight.

The group of about 200 people - including members of the Umkhonto we Sizwe Military Veterans Association (MKMVA), People’s Revolutionary Movement, Unemployed Graduate Movement and Land Party - marched from the Durban Christian Centre to the high court, where they were met with a police barricade, to voice their opposition to what they say is the government violating their freedom of choice.

Masks must fall, says Michael Southwood from the Unity Group during a protest against the wearing of masks, vaccinations and President Cyril Ramaphosa in Durban on Monday @TimesLIVE
🎥: @sandysndlovu pic.twitter.com/XXNwzviM7d

The Covid-19 pandemic reduced life expectancy in 2020 by the largest amount since World War Two, according to a study published on Monday by Oxford University, with the life expectancy of American men dropping by more than two years.

The university said most life expectancy reductions across different countries could be linked to official Covid-19 deaths. There have been nearly 5 million reported deaths caused by the new coronavirus so far, a Reuters tally shows.

Pfizer Inc said on Monday it has started a mid-to-late-stage study testing its investigational oral antiviral drug, to be co-administered with HIV drug ritonavir, for the prevention of Covid-19 infection.

Authorities in Vietnam's biggest city are urging the government to recognise positive rapid tests for Covid-19 to present a clearer picture of its outbreak, state media reported on Monday, a move that could increase the city's case total by 40%.

Positive rapid tests of 150,000 people in the city since Aug. 20 have not been included in the overall tally, Tuoi Tre newspaper said, citing the deputy head of the city's health department, Nguyen Huu Hung.

The southern economic hub has recorded 372,180 infections overall. If 150,000 more cases were confirmed to be positive, it would reduce the city's death rate from just over 3.8% to 2.75%.The health ministry did not immediately respond to a request for comment from Reuters.

Tuoi Tre cited an unnamed official at the city's health department as saying the 150,000 individuals were being treated, but had not undertaken swab tests due to insufficient resources.

.The move is part of a shift away from its policy of targeting zero-Covid-19 cases, which was pursued aggressively prior to April this year, when it was hit by a devastating wave of infections fuelled by the highly contagious Delta variant.

Pedro Guimaraes, a member of Brazilian President Jair Bolsonaro's delegation to the United Nations, has tested positive for Covid-19, the CEO of state lender Caixa Economica Federal said on his one of his social media accounts on Sunday.

Guimaraes, who said he was fully vaccinated, is the fourth member of the delegation that was with Bolsonaro in New York for his address to the United Nations to test positive.

He said he is asymptomatic, but has been isolated since Wednesday, when he returned to Brazil from New York.

Queiroga, diagnosed during the visit, is still in isolation in a New York hotel.

The president said on Sunday he had a negative result in a Covid-19 test. Since the arrival to Brazil, all members of Bolsonaro's delegation are in isolation and have taken tests due to contact with the health minister.

Thailand's coronavirus task force on Monday approved a plan to procure a combined 3.35 mln doses of the Covid-19 vaccines of AstraZeneca and of Pfizer and BioNTech, a spokesperson said.

In SA, people 18 years and older can get the two-dose Pfizer-BioNTech vaccine or the single-dose J&J vaccine.

Sinovac’s two-dose CoronaVac is being trialed on 14,000 children aged between six months and 17 years in countries including SA and Kenya.

Australia's New South Wales state, the epicenter of the country's worst coronavirus outbreak, reported on Monday its lowest rise in Covid-19 cases in more than a month as it begins to ease some tough restrictions amid higher vaccinations.

A total of 787 new locally acquired Covid-19 cases were reported, the majority in state capital Sydney, down from 961 a day earlier, according to a statement from the state health department.

The state recorded 12 new deaths, taking the total number of fatalities from the latest outbreak to 309.

New York is considering employing the National Guard and out-of-state medical workers to fill hospital staffing shortages with tens of thousands of workers possibly losing their jobs for not meeting a Monday deadline for mandated Covid-19 vaccination.