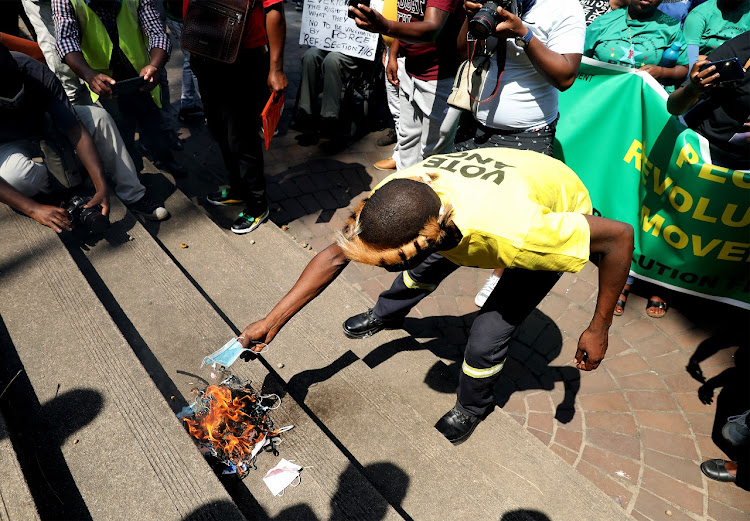 A protester adds his mask to the burning pile as a symbol of his opposition to government violating people's freedom of choice
Image: Sandile Ndlovu

An anti-mask and anti-vax activist in Durban claimed on Monday that making people wear masks was akin to German ruler Adolf Hitler asking people to wear a star as a form of forced control.

That’s the view of Michael Southwood of the Unity Group, who joined several political parties and anti-vaccination groups during a protest in Durban on Monday, where they threw their masks on to the ground and set them alight.

The group of about 200 people - including members of the Umkhonto we Sizwe Military Veterans Association (MKMVA), People’s Revolutionary Movement, Unemployed Graduate Movement and Land Party - marched from the Durban Christian Centre to the high court, where they were met with a police barricade, to voice their opposition to what they say is the government violating their freedom of choice.

This, they claimed, government was doing by forcing people to wear masks and by implementing the concept of vaccination passports, which have been advocated by president Cyril Ramaphosa as the mastermind.

“It doesn’t make sense, wearing a mask. It's like Hitler forcing people to wear a star. It's a means of control. The whole idea is that is a tool or mechanism of control being foisted upon us without any scientific background. First it was the mask, then it was the injection [vaccine], and who knows what is next.

“The mask is as effective as using chicken wire against mosquitoes. There is no scientific proof about the efficacy of that ‘piece of clothing’ that Ramaphosa advocated that we wear around our mouths and necks.” 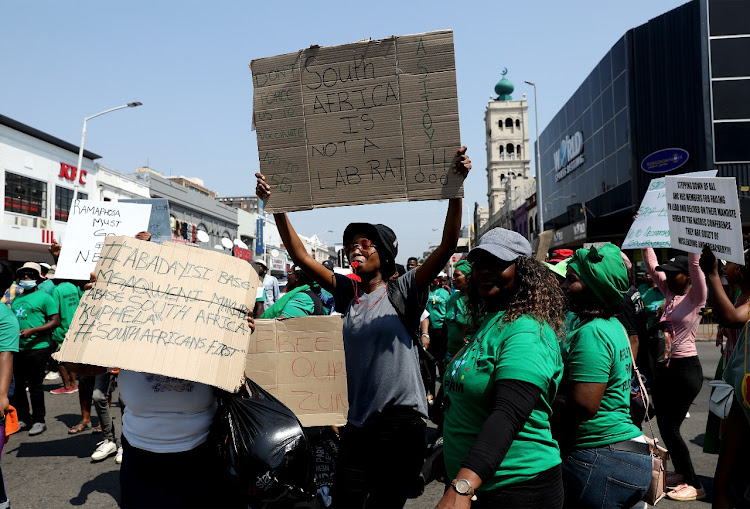 Masks must fall, says Michael Southwood from the Unity Group during a protest against the wearing of masks, vaccinations and President Cyril Ramaphosa in Durban on Monday @TimesLIVE
🎥: @sandysndlovu pic.twitter.com/XXNwzviM7d 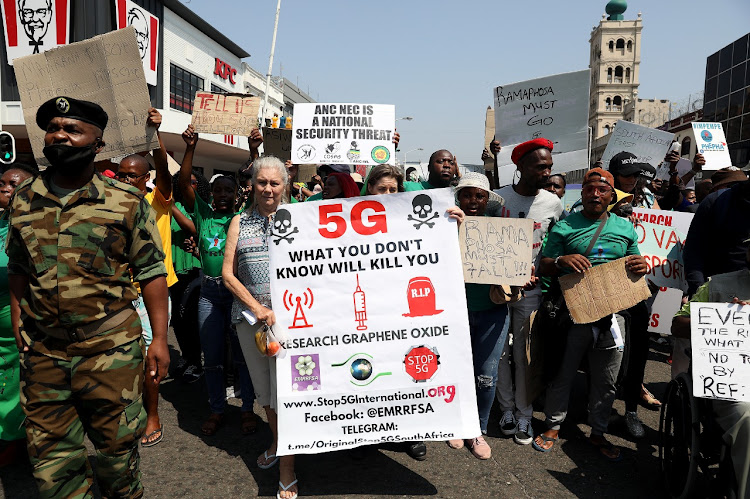 A protester holds up her placard during a protest march in Durban on Monday in opposition to government violating people's freedom of choice
Image: Sandile Ndlovu 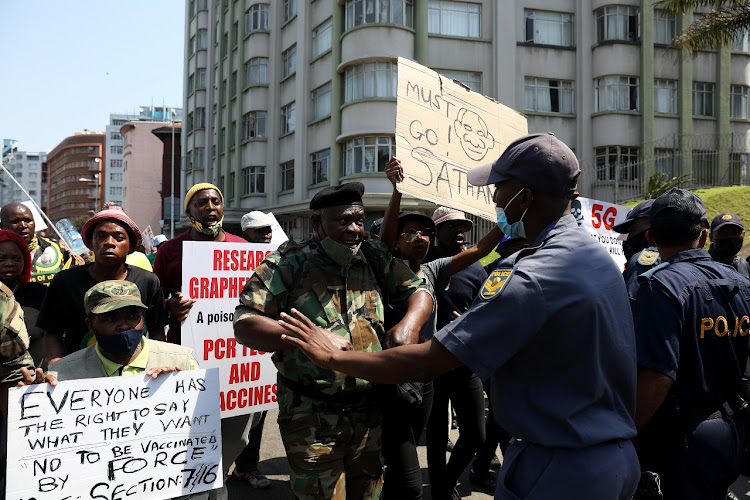 An MK vet exchanges some heated words with a policeman during a march in Durban on Monday
Image: Sandile Ndlovu 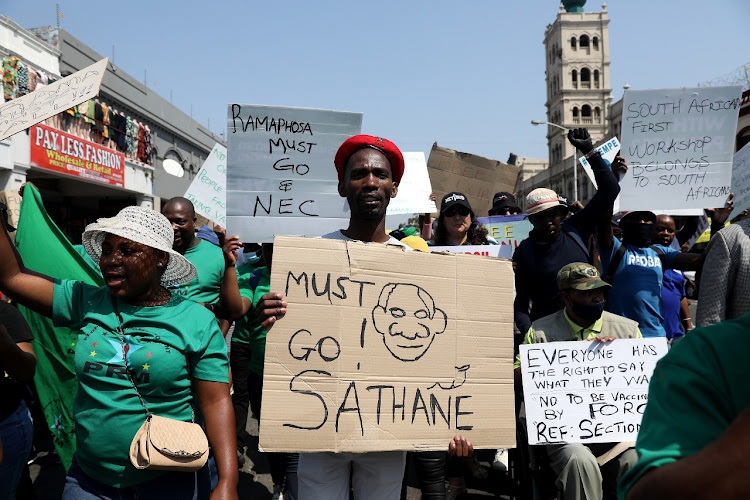 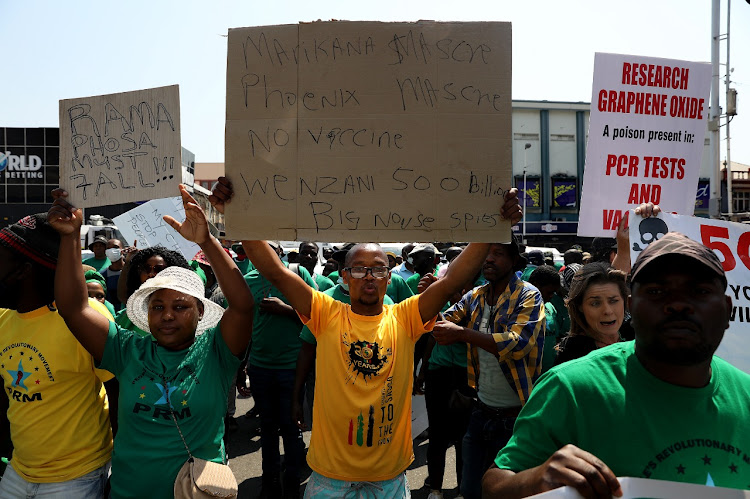 He said the masks were useless and at the march called for people to discard them and set them on fire.

Southwood said he based this on anecdotal evidence from numerous doctors who don’t wear masks both locally and internationally.

“There certainly isn’t any scientific proof that the masks we wear can protect someone from the transmission of the virus.” This was why they were calling for the burning of masks.

Nhlanhla kaSomlomo Mthembu, a KwaZulu-Natal Land Party committee member who also addressed the group, said they were opposed to the vaccine passport.

“Soon we will be denied access in government and any facilities and buildings because we don’t have the injections. So we say 'Phansi vaccination passport, phansi' Today we are burying the masks, burying corona and burying Ramaphosa live. This is the starting of a burning fire and we want to mobilise everyone to join the campaign to burn a mask.”

The group was prevented from proceeding to the Durban city hall by a strong police presence who formed a human barricade outside the high court.

Anglican Church calls for mandatory vaccinations for its clergy

The Anglican Church of Southern Africa wants to make it compulsory for its priesthood to be vaccinated against Covid-19.
News
4 weeks ago

Minerals Council SA says it has reached a milestone of 200,000 employees and service providers vaccinated against Covid-19.
News
4 weeks ago 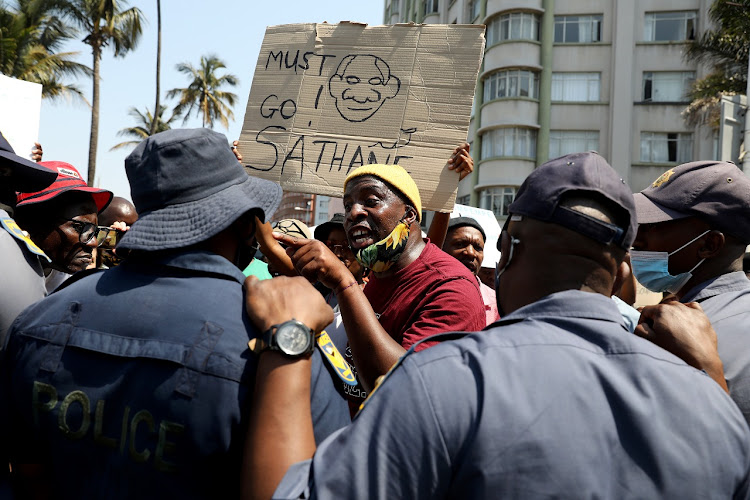 A protester clashes with a policeman at a march in Durban on Monday in opposition to government violation of people's freedom of choice
Image: Sandile Ndlovu