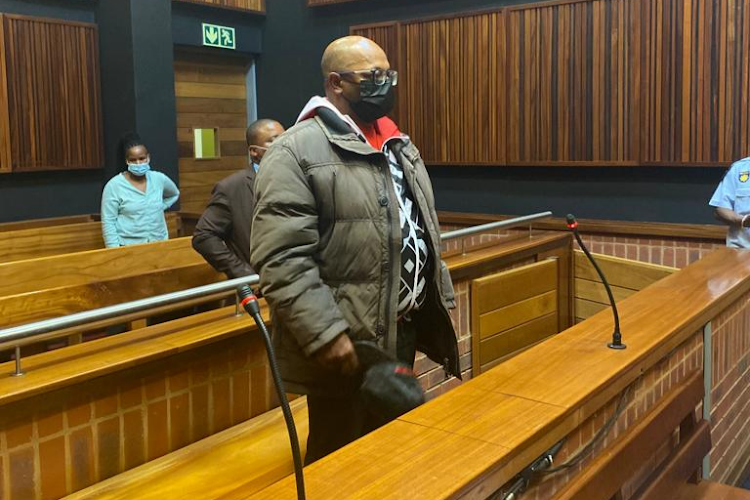 Kuben Moodley in the dock on September 29 2021.
Image: Ernest Mabuza

The Johannesburg specialised commercial crime court granted the bail on Wednesday after it dismissed the state's request for a postponement in Moodley's bail application.

Moodley applied for bail on Wednesday after his arrest at OR Tambo International Airport on Tuesday evening. He was on his way to Dubai when he was taken into custody on charges of fraud, theft, corruption and money laundering.

His arrest is linked to alleged money laundering of the proceeds from contracts  improperly awarded by Transnet to Regiments Capital and Trillian, as well as theft by Regiments Fund Managers from the Transnet Second Defined Benefit Fund.

Moodley presented an affidavit saying he posed no danger to the functioning of the criminal justice system or the bail system.

Alleged “Gupta fixer” Kuben Moodley, who was arrested at OR Tambo airport en route to play golf in Dubai, applied for bail in the Johannesburg ...
News
9 months ago

The state indicated it was not ready to present its affidavit opposing bail and sought the postponement until Friday.

However, the defence opposed the state's application.

Magistrate Jeremy Jansen van Vuuren refused the state's request for postponement and said it had not shown that it was in the interests of justice for a further postponement and for Moodley to be kept in custody.

Moodley's attorney Piet du Plessis asked for bail to be set at R100,000 but the court imposed the higher amount.

The matter was postponed to February 28 next year.

An alleged middleman in the Gupta-linked Regiments Capital and Trillian corruption saga is expected to make his first appearance in Johannesburg's ...
News
9 months ago

The high court in Johannesburg has ordered that the interim restraint order against a controversial businessman's assets - worth R232m - be extended ...
News
1 year ago