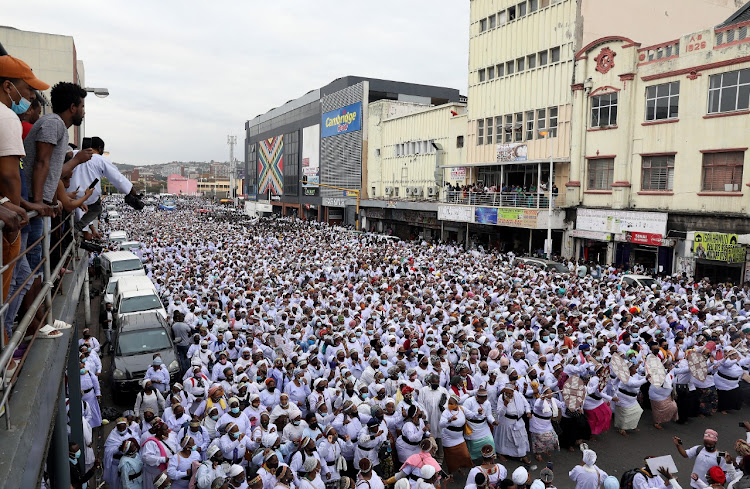 Durban residents marvelled at the sea of white as the Nazareth Baptist Church embarked on a 'peace walk' on Tuesday.
Image: SANDILE NDLOVU

Members of the Ebuhleni faction of the Nazareth Baptist Church could face legal action after a march which saw thousands of congregants descend on Durban's CBD on Tuesday.

On Wednesday police spokesperson Col Thembeka Mbele confirmed that a docket had been opened at the Durban Central police station for contravening Disaster Management Act regulations.

Mbele said the matter was under investigation and could not confirm whether anyone had been arrested.

Durban's city centre was brought to a standstill on Tuesday when congregants – estimated to be about 10,000 – of the Nazareth Baptist Church descended for a “peace walk”.

The walk was aimed at seeking intervention from the ANC regarding an ongoing leadership dispute within the religious organisation.

Durban’s city centre was turned white on Tuesday when congregants of the Nazareth Baptist Church descended for a “peace walk”, sparking fierce debate ...
News
3 weeks ago

Dressed in their traditional robes, a blanket of white was cast over the streets of the CBD as congregants pledged their support for their preferred leader, Mduduzi “uNyazilwezulu” Shembe.

Concerns have been raised about the march being a Covid-19 superspreader, as the police failed to intervene and manage the situation.

An application for the march was approved by the eThekwini municipality under the impression that there would not be more than 500 people in attendance, in line with Covid-19 regulations.

Metro police spokesperson Supt Parboo Sewpersad said it was the mandate of SAPS' public order police to intervene in terms of crowd management.

Mbele failed to answer why SAPS didn't handle the situation.

Shembe, son of the church’s late leader Vimbeni, has endured a number of legal blows in his bid to lead the church, which boasts more than 5-million followers.

In June, a Constitutional Court judge refused to entertain his appeal to have the apex court challenge a ruling made by the supreme court.

The battle for control of the church started in 2011, soon after the death of Vimbeni. The church has in the past accused KZN premier Sihle Zikalala of favouring its rivals, the Thembezinhle faction.

Thousands march through Durban in support of their choice in leadership dispute, amid Covid superspreader fears
News
3 weeks ago

Durban's city centre was brought to a halt on Tuesday when congregants of the Nazareth Baptist church descended to it as they embarked on a peace ...
News
3 weeks ago

The roads around King Dinuzulu Park in central Durban were a sea of white as masses of worshippers gathered on Tuesday morning.
News
3 weeks ago