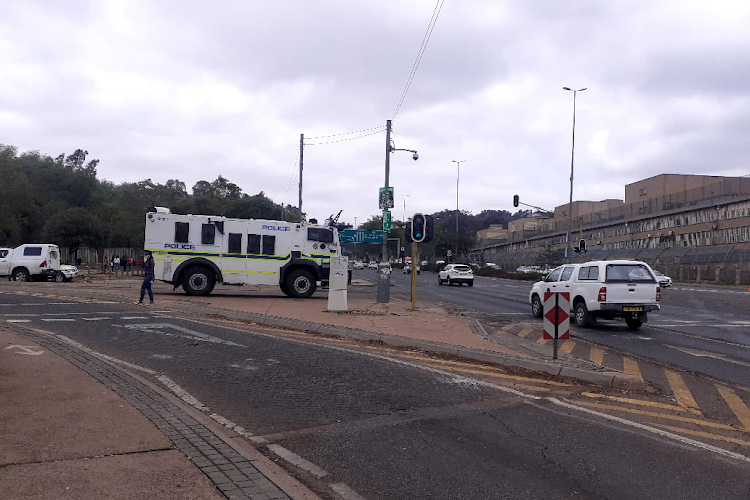 Affected roads have been reopened in Pretoria.
Image: Shonisani Tshikalange

A local election dispute saw protesters take to the streets early on Thursday, blocking roads with burning tyres and rubble about Kgosi Mampuru Prison in Pretoria.

Tshwane metro police department spokesperson Isaac Mahamba said protesters allegedly took to the streets because of a disagreement concerning the nomination of a ward councillor.

“It's alleged a certain political party is fighting for the nomination of a local councillor, so some members are not agreeing to that or what happened during the process,” he said.

Mahamba said affected roads had since been reopened. However, he said about 60 people were still gathered in the area.

“The situation is normal, motorists can go through, though there is congestion due to earlier street closures. The rubble, rocks and tyres that were blocking the roads have been removed. We will be there until everything is back to normal,” Mahamba said.

“There was something brewing there and about 5am when it was reported that there was a blockage, we activated a vehicle to monitor the situation. We are aware that it’s in Kgosi Mampuru,” he said.

A person in the Salvakop area, who asked not to be named fearing intimidation, said people took to the street, decrying the ANC candidate selection process in Ward 8, Tshwane inner city.

“It’s about the list that is out of the ward councillor candidates. We had seven candidates, three women and four men. The first process of nominating a candidate was done and when we started with the process of bringing it to the community, there was no unity.

“A woman candidate who was successful was called at the IEC to fill the acceptance nominee form and submitted all her required documents. After a week they delivered picture boards to her house and the last process was for her to go take pictures.

At least three Tshwane councillors have fled their homes out of fear their lives would be brutally put to an end.
News
2 months ago

“From there things started getting out of hand. There was a list that was circulating about and her name was removed.

“We don’t know why or how ... she has all the proof, she was verified, she has police clearance but we are failing to get answers.”

Bushy Mampuru, a youth league chairperson in a ward, said they were called to speak to  members who felt aggrieved by the ANC decision in the selection of ward councillors.

“The situation was quite volatile and we then asked for intervention from the police. We are appealing to them as part of the leadership of the ANC that if a decision is taken by the upper structure, we should then respect that decision.

“Unfortunately now a decision has been taken and nothing is going to happen. The IEC has closed. These are the names that are there, published on the website. You can only deal with this after the election,” he said.

Lock the door and don't open for anyone! That's the advice President Cyril Ramaphosa gave to his sister, Ivy Ramaphosa.
News
2 months ago

Several groups marched to Durban's high court on Monday, where they burnt their masks in protest against what they deem as state control.
News
2 months ago

The ANC Youth League has thrown its weight behind the ruling party’s election manifesto for the upcoming polls, but only if 100 of SA’s 278 ...
Politics
2 months ago