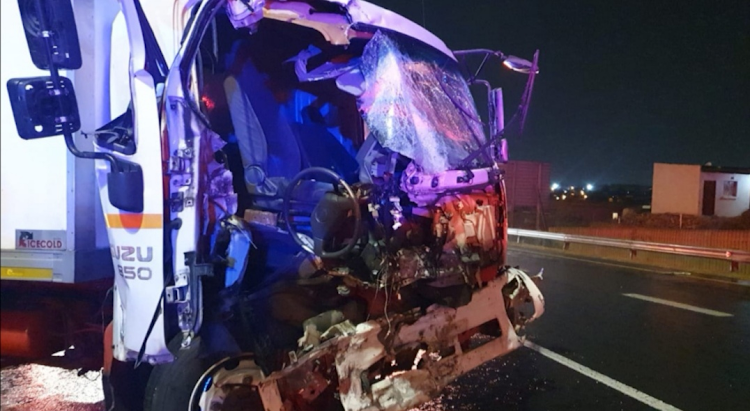 A truck driver was flung out of his vehicle on the N1 on Wednesday night.
Image: Emer-G-Med

A truck driver was fighting for his life in hospital after being ejected from his vehicle in a horrific crash on the N1 highway on Wednesday night.

The accident happened a day after two people died and two were injured in another N1 crash involving a chemical tanker and two cars.

Events leading up to the crash remain unclear.

Paramedics found the severely injured driver lying on the road.

“Advanced life support intervention was needed to stabilise him before he was transported by ambulance to a nearby hospital for further care.

“The cause of the incident and the events preceding it are unclear and will form the subject of a SA Police Service investigation,” said Van Reenen.

Two people died and two were injured after a chemical tanker and two cars collided on the N1 northbound between William Nicol Drive and Rivonia Road ...
News
7 months ago

‘Did anyone die? Please call my wife’: sobbing tanker driver after fatal N1 crash in Joburg

'He told us two years ago he lost his son in a car accident. He was crying like a baby,' Gerhard van Rooyen, who witnessed the fatal crash on ...
News
7 months ago

A motorist suffered a gunshot wound to his leg after an alleged spiking incident on the N1 highway near Hammanskraal, Gauteng on Monday night.
News
8 months ago