Family, community members and comrades on Thursday held a memorial service in Mabopane to celebrate the life of slain councillor Tshepo Motaung. 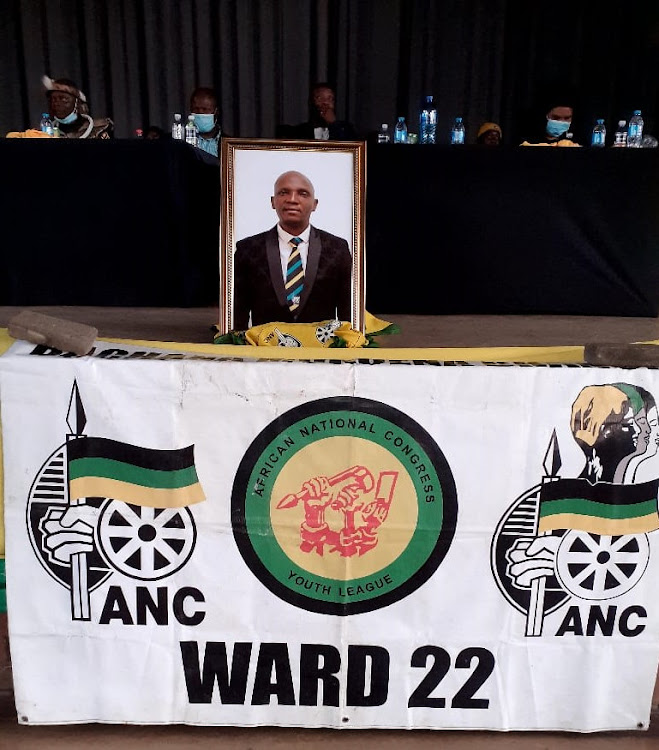 A memorial services was held on Thursday for Tshepo Motaung, a ward 22 councillor in Mabopane who was shot at least 20 times by unknown hitmen on Friday, August 24.
Image: Shonisani Tshikalange

“They shot him until they ran out of bullets. A car picked up the two men and they left.”

This is how Modise Mocha, who was travelling with Tshepo Motaung at the time of his murder, detailed the last moments of the ward 22 councillor's life.

Motaung was shot at least 20 times a week ago. Mocha, his uncle, and a cousin were in the car with him.

Friends and family, including community members and ANC comrades, gathered in Mabopane on Thursday, where a memorial service was held for Motaung. They sang as they gathered, celebrating his life.

Looking back at his nephew’s last moments after the shooters had fled the scene, Mocha said: “The only thing that Tshepo said when I went back to him, I asked him if he was fine, and he said, 'Yes, I am fine'. But I could see that he was not fine, and that was the end of Tshepo. Shot by another comrade.”

The memorial service of slain #ANC Ward 22 councillor, Tshepo Motaung is underway in #Mabopane. He was shot atleast 20 times at close range on Friday evening. pic.twitter.com/9AEBkaE84t

Describing the day of the incident, Mocha said he had travelled to Johannesburg with Motaung and had later returned to his mother’s house where they spent time as a family.

Mocha said that while on their way to his home in Mabopane later that day, Motaung was forced to make a U-turn at a street that was closed because of roadworks.

“Tshepo slowed down and there was a car approaching from behind us, so he tried to make way for the car so that he could make a U-turn. The car had just passed a little bit from his side, and that is when they started shooting,” he said.

Mocha said it took a while to realise they were being shot at.

“I saw Tshepo opening the door [and] my nephew running. I followed and ran. I was following behind him, then passed. When we passed one street, that is when Tshepo fell and they continued shooting and shot me. I was not even aware that they shot me. I saw Tshepo falling down and him being shot with a rifle and a pistol,” Mocha said.

Showing TimesLIVE his wounds, Mocha counted six gunshot entry points on his body, including on his hand.

“My heart felt pain because, the day that he died, I saw him sick and die on the same day. He had been sick about two days before. He was very weak, he was not feeling well,” he said.

Mocha said he was worried in the wake of violence and killings that had taken place recently.

“My wife didn’t feel safe with me coming to the memorial because she thinks they are targeting me, but I told her that it was not true.

“I am a bit worried because if you see the way the ANC is going, it’s like we are no longer fighting apartheid, it is us who are fighting among ourselves,” he said.

Mocha said Motaung loved the ANC because he grew up in it. He said he had always taught his nephew to accept criticism as a leader, as that would help him grow.

One ANC member who spoke at the memorial said he was also on an alleged hit list, but that he wasn't scared. He claimed that Motaung was on the same list.

“Comrade Tshepo knows who killed him. He said, 'My enemies have my pictures'. He said they even posted his pictures on a group. Tell them we are not scared, they must come with their rifles,” the party member said.

Many of those who spoke at the memorial said they lived in fear, but were determined to move forward.

At least three Tshwane councillors have fled their homes out of fear their lives would be brutally put to an end.
News
2 months ago

ANC secretaries from national, provincial and regional structures are expected to meet on Tuesday to discuss a spate of political killings and ...
Politics
2 months ago

Devastated sibling, ANC suspect the looming local elections are behind the hit on Mabopane councillor Tshepo Motaung
News
2 months ago