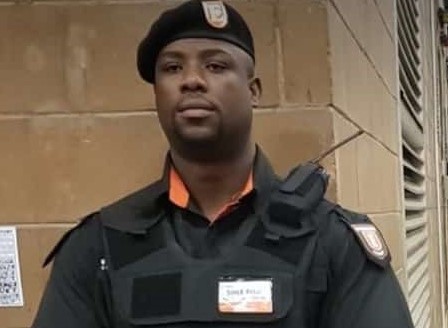 Sihle Zulu, a tactical officer for Excellerate Services, died in hospital on Friday night after being shot trying to stop armed robbers on Wednesday.
Image: Supplied

The security officer who was shot on Wednesday after a robbery at a jewellery store at the Gateway mall in Umhlanga, north of Durban, has died.

Sihle Zulu, a tactical officer with Excellerate Services, succumbed to his injuries in hospital on Friday evening. The news was confirmed in a statement by the company.

“It is with a heavy heart and great sadness that I inform you that we have lost one of our Excellerate family members,” said the company.

“Tactical officer Sihle Zulu unfortunately succumbed to his wounds earlier tonight just before 8pm in the Umhlanga Hospital. He was shot on Wednesday during an armed robbery at Gateway when he attempted to take on a heavily armed gang.

“In his passing, we have lost not only a colleague but also a gentleman and friend, known for his passion for life and his work as a tactical officer. You have run your last race our comrade and it's time to rest and sleep on. May your soul rest in peace.”

Zulu was shot in the parking lot of the mall after at least 10 armed men robbed Damjee Jewellers at gunpoint.

CCTV footage of the robbery was leaked shortly after the incident.

Shawn Herbst of Netcare 911 said Zulu was shot in the abdomen after trying to intervene in an armed robbery.

“According to witnesses, the store was ambushed by about 10 to 15 suspects, all armed. The patient was found to have sustained critical injuries and was treated on scene by a Netcare 911 emergency care practitioner. Once stabilised the patient was taken to a nearby hospital.”

A security officer is fighting for his life following a jewellery heist at the Gateway Theatre of Shopping in Umhlanga, north of Durban, on Wednesday ...
News
7 months ago

A project to train artisans in diamond cutting has instead led to the arrests of four government officials in the Northern Cape.
News
8 months ago