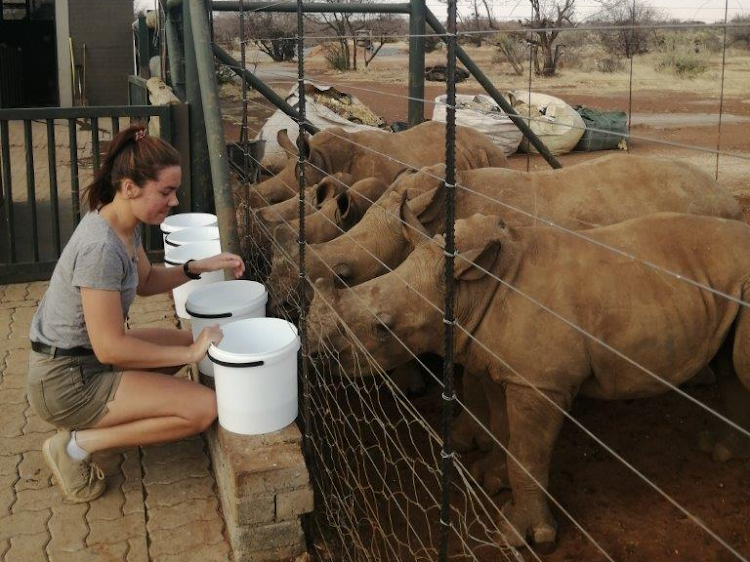 The efforts form part of her MSc studies in the animal science department at SU’s AgriSciences faculty.

“It’s hard to believe, but horses and rhinos are related as they share an ancient relative and therefore have similar digestive systems,” she said.

Guy, who matriculated from Rustenburg Girls’ High in Cape Town, said the current recipe under development is already proving to be quite valuable and is being tested at rhino sanctuaries across the country.

The estimated rhino population in Africa is about 18,000, which represents a 12% decline in the past decade, according to the latest State of Rhino ...
News
8 months ago

The recipe contains ingredients including whey powder, vegetable fat, dextrose and sodium caseinate and Biosin. The end result is a fine white powder which is mixed with water and seems to be more cost-effective than horse milk replacers.

Both powder mixtures are manufactured in Oudtshoorn by Nandrea Health Products.

Guy is comparing its use to that of the replacement horse milk in terms of how well calves grow and how easy it is to digest. Calves in her trial are weighed every week.

“It’s not easy to train the animals to step onto a scale and stand still long enough so appropriate body measures can be taken,” she said. “This can be difficult and stressful, especially with older or temperamental calves.”

Guy said a major difficulty was to obtain enough rhino cow milk to analyse. It took two years before she had collected enough samples so these could be adequately analysed.

Sanctuaries often receive injured, sick or weak calves, ones abandoned by their mothers or who were separated from them and cannot be reunited again.

“I first needed to know what its composition was before we could start working on a replacement recipe.”

She said it is a dream job to work daily with an endangered species.

The team took their chances to collect milk samples whenever a rhino cow with a calf was darted for routine horn trimming, for example.

“At such times the calf must be driven away from the mother so you can work with her. These situations can become dangerous if the calf returns while personnel is at work.”

With the help of other animal orphanages in SA, Guy is hoping to enrol even more calves into the trial.

“Too many rhino cows with calves by their sides have been poached in recent years and  other mothers die from natural causes. Sanctuaries often receive injured, sick or weak calves, ones abandoned by their mothers or who were separated from them and cannot be reunited again,” she said. 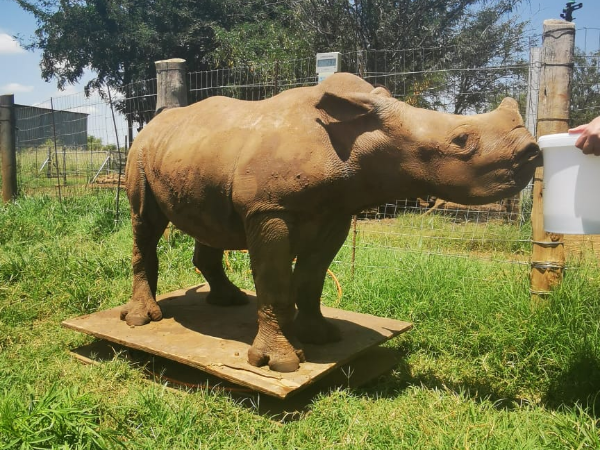 Rhino calves that are part of the research project have to be weighed regularly, but to get them to stand on a scale is not easy.
Image: Photo: Dakota Guy

Newborn calves — which at between 60kg and 80kg weigh as much as an adult human — drink eight to 12 bottles per day, initially at two to three-hour intervals. The calves can drink between six and 6.5l at a time. Older ones drink more than 20l per day.

Most start eating solid food by their third month, depending on when their teeth are set, but are only fully weaned by their 16th month.

“Rhino calves cry like babies when they are hungry,” said Guy.

She said without their mothers, their chances of survival are slim.

“Rhino orphanages around SA play an important role in saving these calves.”

For the past two years, Guy has been working at two orphanages — first at Little Rhino Orphanage in the North West, and since late last year at Rockwood Conservation near Kimberley in the Northern Cape.

Guy’s supervisor, Dr Brink van Zyl of the department of animal sciences at SU, said there is a long road ahead to determine the success of the rhino milk replacer. “However, the benefit of this trial for the conservation of the species is priceless,” said Van Zyl.

Teachers at a daycare centre in Boksburg were shocked last week when, during outside playtime, they looked up and saw a white tiger watching them.
News
7 months ago

Poachers kill rhino and calf at nature reserve in Krugersdorp

A rhino and her calf have been killed at Bothongo Rhino and Lion Nature Reserve in Krugersdorp near the Cradle of Human Kind.
News
8 months ago