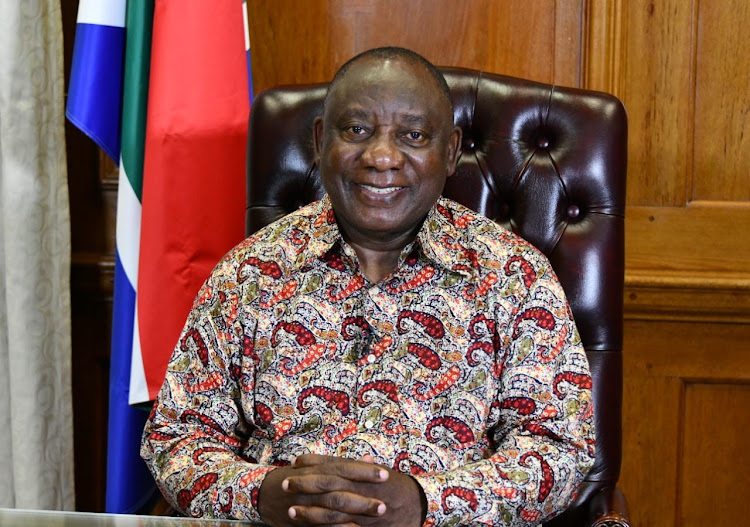 President Cyril Ramaphosa announced a move to alert level 1 on Thursday evening in a shirt that had many South Africans amused.
Image: GCIS

President Cyril Ramaphosa’s latest flamboyant “family meeting” shirt has again put him on the radar of the fashion police.

Ramaphosa’s paisley print ensemble he wore when he announced the move to lockdown level 1 last week received a hilarious reaction from South Africans, with many comparing the patterns to prawns.

Another posted: “If Ocean Basket was a person.”

Others were more flattering, for example: “He’s bringing unisex style back into fashion. The shirt looks good on him. Viva President.”

A meme showing the president in his shirt beside a picture of Friends star Courtney Cox in a replica has also been doing the rounds on social media.

A few weeks ago another shirt — made by Nelson Mandela's shirt maker Sonwabile Ndamase — trended when the president announced SA’s move to level 2.

Ndamase was commissioned by Ramaphosa about three years ago to make a collection of shirts for him, similar to Mandela’s shirts.

Many ridiculed Ramaphosa for his choice of shirt and accused him of trying to emulate Mandela’s iconic look to convince South Africans to vaccinate.

The loose-fitting, patterned shirt had been popularised by the late former statesman Mandela, who was often seen at formal affairs in his casual look.

If you’ve got it, flaunt it. And if you don’t have it … borrow it.
Lifestyle
3 months ago

“I find it so interesting that for the first time the public is ‘fashion-policing’ these shirts.”

Ndamase described the much-talked about garment as a “paisley tribal print cotton shirt”.

“In the era of the late Nelson Mandela, they admired them in any form the fabric was presented,” he said.

“Madiba popularised the shirts which I created, elevating the seemingly casual garment to formal situations.

“President Ramaphosa is going to be strong as he chose to pick up the late Nelson Mandela spear or baton.”

The Covid-19 vaccine does not cause infertility in women and erectile dysfunction in men, President Cyril Ramaphosa said on Sunday.
Politics
3 months ago

The government will this week host a first-of-its-kind Women's Economic Assembly to discuss and find solutions to the economic hardships facing women ...
Politics
3 months ago

Level one at last, but at what risk as polls loom?