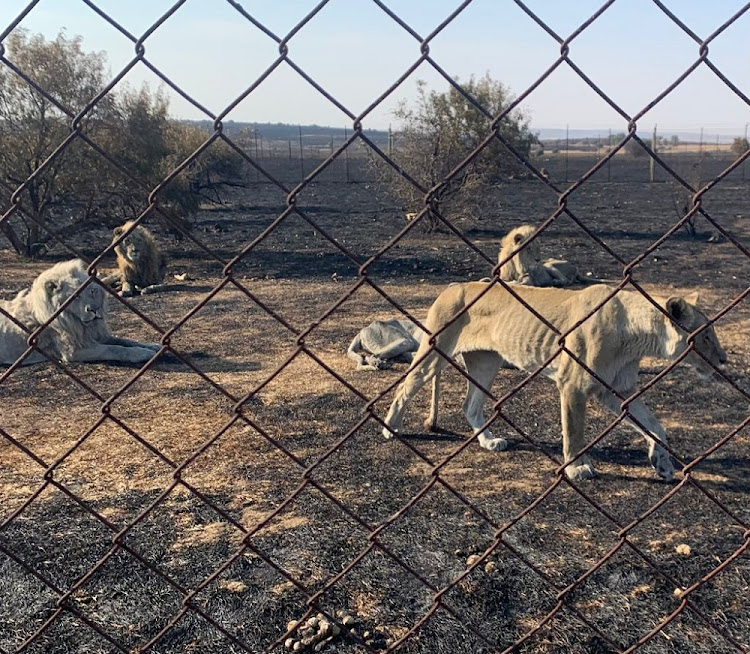 The SPCA said some of the lions in the enclosure had horrific burn injuries while others were underfed.
Image: SPCA

Bloemfontein animal rescuers had to put down 30 lions after a farmer allegedly refused help after a large veld fire north of the city in August.

According to National Society for the Prevention of Cruelty to Animals (NSPCA) Bloemfontein manager and senior inspector Reinet Meyer, the organisation approached the farmer, in the Glen area north of Bloemfontein, and offered to help him if there were any animals in distress on his farm.

Speaking to TimesLIVE two months after the incident, Meyer said the information was only being made public now because the NSPCA was waiting for veterinary reports and cost analyses to be added to a criminal docket which was opened for investigation against the farmer.

The area where the farmer kept 59 lions was ravaged by a large veld fire in August, and Meyer said they found the farmer’s claim that none of his animals were in distress incredible and unbelievable.

When they arrived at the farm and asked to be let in to inspect the animals, the farmer asked whether they had a search warrant.

“We contacted the owner to find out if he had any damage on his farm with the animals. He said, no, there was no damage,” said Meyer. “But we went back the next day because of the way the place had burnt. There was no way that the animals wouldn’t have been affected.”

Two lions have been spotted roaming on farms in the Baltimore area outside Lephalale in Limpopo after reportedly escaping from a private game farm.
News
8 months ago

When they returned, armed with a search warrant, they discovered that many of the lions had suffered burns.

“We gave him a warning to get treatment for the animals from a veterinarian. The next day he got a vet and the vet told us the animals weren’t injured that badly, [that] it’s like a dog walking on a tar road and getting some burn damage, but it’s not so bad. So he just gave pain medication to 11 of the lions which, according to him, would last three days,” she said.

Meyer said the report by the private vet, who has a local practice in Bloemfontein, was questionable and that other vets they consulted said that the pain medication he administered would have only had an effect for 24 hours and not the claimed three days.

After three days, SPCA inspectors returned to the farm, this time with their own vet.

“It was absolutely shocking what we witnessed there,” said Meyer. “The paws of the lions were covered in blisters. As the lions tried to stand up they would just collapse again because, of course, it’s so sore.”

The SPCA vet darted all 59 captive lions to conduct a proper investigation.

“Our vet saw they had very serious burn wounds, and some of them had lung damage. Many of their mouths were burnt so badly that they couldn’t eat. They were in a very weak and emaciated condition with a body score of between 1 and 2 as a result of hunger,” Meyer said.

She said 30 lions had to be put down as there was “no other outcome for them”.

She said the lions’ condition was symptomatic of longer-term underfeeding. A small saving grace for the remaining 30 lions was that they would get a larger share of food between them after their kin were killed, said Meyer.

Meyer would not say what she suspected the lions were being bred for but said it was likely not for trophy hunting.

“They were absolutely underfed, the body score was very low. These lions would look extremely thin in pictures. I wouldn’t be proud to stand next to such an extremely thin lion (as a trophy).

“I can’t say what he does with the lions, I have my suspicions but I won’t elaborate on that because I’m not sure of my facts, but it’s all lions in camps,” said Meyer.

She said Free State conservation laws dictate that farms need one hectare per lion and that some of the camps the lions were being kept in were too small for the number being held there.

The SPCA will be returning to the farm on Friday with other agencies to conduct a further inspection during which they will also inspect the size of the camps for compliance.

They will also be checking whether the farmer has repaired any of the fences destroyed by the fire.

“There is no power, so there’s no power for the electric fencing which is completely against the law. The wooden poles of the fence burnt down and there’s been no effort to repair them. So we are going to return with other authorities to do further inspections and we will take action accordingly,” said Meyer.

Free State farmers have previously found themselves on the wrong side of the law for alleged illegal handling of lions.

Meyer recalls a horrific scene she witnessed when they came across a lion abattoir at the Wag-’n-Bietjie farm where lions were slaughtered on an industrial scale for their bones allegedly for use in eastern traditional medicine. The criminal case, which was also handled by Meyer, is now in the high court.

“The lion industry really is a problem in the Free State and now with the new laws, the farmers don’t care any more because the lions have no value to them any more,” she said.

“The new law says that captive lions aren’t allowed to be kept and no breeding is allowed. It just has to go through parliament. When it comes to light, the farmers won’t see the value in these animals because they won’t be able to slaughter them for their bones,” said Meyer.

Meyer said for the lion farmers they interact with, it’s all about “money in the pocket” and that lion bones were once very valuable.

What will happen to the lions once they become useless to the farmers? Meyer says she is too scared to think about it.

Lion shot after escaping from private game farm in Limpopo

“The lion was a danger to the villagers and farmers,” National African Farmers Union president Motsepe Matlala said on Monday.
News
8 months ago

The predators and antelopes at the Lion & Safari Park near Broederstroom escaped harm on Tuesday after an uncontained wildfire burnt up to the ...
News
9 months ago