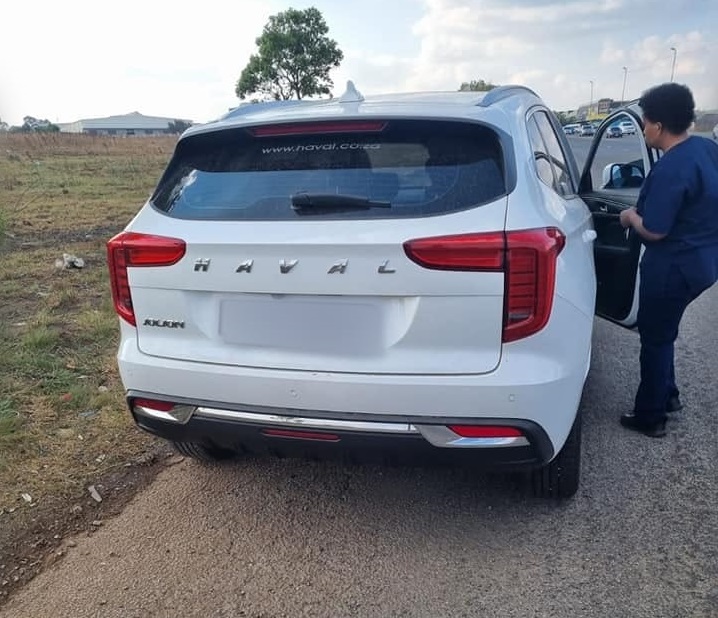 The woman, clad in Netcare scrubs, said she stopped to attend to her dog and not dump it as alleged by the person who posted photos and videos on social media.
Image: Supplied

A Netcare employee who was accused of trying to dump a dog in the Boksburg area has been cleared of any wrongdoing after an inspection by the SPCA and an internal investigation by the hospital group.

According to a Netcare statement, the woman and her family are living in fear after a photo of her and her vehicle went viral on social media.

The woman intends to take legal action against the passer-by who took her photo and posted it on social media without understanding why she stopped and what she was doing with the dog.

She said the key finding was that the passer-by who stopped and confronted the staff member misunderstood what was happening and made incorrect assumptions.

The Netcare Group says it has identified a woman allegedly seen trying to dump a dog on the side of a road in Boksburg, on Gauteng's East Rand, and ...
News
7 months ago

“Earlier this week, following the incident, our colleague voluntarily approached the SPCA to inspect her home,” said Ndzwayiba.

“Netcare has had sight of the formal letter provided by the SPCA upon the conclusion of their investigation.

“The letter states that an inspection of the dogs belonging to the staff member in question was conducted on October 7 2021, noting one black, male cross border collie and one male cross rottweiler. It also states that both dogs appeared to be healthy and had access to food, water and shelter.

“Our colleague's report of the incident indicates that she was out driving and had one of her dogs with her, as the family has recently suffered some traumatic criminal incidents and she feels safer with the dog by her side.

“She stated that on this particular occasion the dog began whining, so she stopped the car to attend to it. It seems the passer-by then pulled over and began to interfere, which our colleague took umbrage to, and she put her pet back in the car and drove home.

“The passer-by took photographs of this event, without permission, and posted them online along with her assumptions that this was an attempt to abandon the dog. As a result, our colleague has been publicly berated and maligned.

“Public outrage about the unfounded post has reached such proportions that the family are now afraid to drive their vehicle for fear of being harassed or attacked.

“They have decided to take legal action against the individual who misinterpreted the event and who has caused them a great deal of harm by levelling these false accusations against them on social media.

“This has truly been a terrible ordeal for our colleague and her family, for whom Netcare is arranging counselling to assist them in overcoming this traumatic experience. We trust that the information provided in this statement brings some much-needed clarity to the situation and that the family will now be left in peace to recover,” Ndzwayiba said.

“It was absolutely shocking what we witnessed there,” said Meyer. “The paws of the lions were covered in blisters. As the lions tried to stand up ...
News
7 months ago

Teachers at a daycare centre in Boksburg were shocked last week when, during outside playtime, they looked up and saw a white tiger watching them.
News
7 months ago