Gabisile Shabane and her 15-month-old nephew were taken from their home in Emalahleni in January 2018. She was murdered - allegedly for her body parts.
Image: SAPS

The Emalahleni girl with albinism who was murdered, allegedly for her body parts, had started to trust and become attached to one of the men who later partook in rituals in which muti concocted from her body parts and blood was used.

In a confession statement given shortly after his arrest in 2018, Mr X gave details of how Gabisile Shabane had begged him not to leave her with the two men who were part of the plot to kill her.

Mr X is a state witness who is in witness protection and has, since last week, been testifying in the high court in Middelburg against three men charged with Shabane’s murder.

TimesLIVE refers to him as Mr X as his identity may not be revealed.

The child pleaded with me not to leave her behind as her trust was with me. I told her that ... I will come back

In his confession statement, Mr X described how on January 29, 2018 he was picked up by two of the accused — traditional healer  Thokozani Msibi and Mr X’s friend, Mthobisi Brilliant Mkhize — at his place of work in Emalahleni (formerly  Witbank). Msibi informed them that he had managed to find a person with albinism from KwaMhlanga on whom they were to perform a ritual , “which would change their lives forever”.

Mr X had hoped that the ritual would result in his mother, who had suffered a stroke, being fully healed.

The three men went to a plot in Kromdraai where they picked up Mfanasibili Gamedze, who had been keeping Shabane at his home since she was abducted at gunpoint from her home in Hlalanikahle along with her 15-month-old nephew Nkosikhona the previous night.

A state witness has given shocking testimony in the trial of three men implicated in the 2018 murder of Gabisile Shabane, a girl with albinism who ...
News
3 months ago

The gunmen had mistaken Nkosikhona for another child with albinism who lives in the same house. Realising en route that the child was not the one they were searching for, they tossed him over the bridge on the N4. His decomposing body was found in a swamp days later.

Mr X described how he first came to meet Shabane once he and the other two accused arrived at Gamedze’s plot and parked outside the gate.

“Mr Gamedze came carrying a child on his back and he put the child on the ground and opened the door. Such child climbed inside the vehicle as Mr Gamedze whispered in the child’s ear. The child entered inside the car. As I was seated on the left back seat, the child sat also in the back seat in the middle,” Mr X said.

“Mr Gamedze went back to his house and came back in possession of a blanket. I then noticed that such child was an albino and looked like a boy, but she was a girl. The child was wearing a blue jacket with John Craig label on one of its [sleeves] ... and a panty. That jacket was a little longer for her as it was nearly long to her knees,” said Mr X.

Speaking to TimesLIVE in 2018 when the search for Shabane was still under way, investigators had said the little girl was only wearing her underwear when she was abducted from her home.

A 13-year-old girl who was snatched from her bed in Hlalanikahle‚ Witbank‚ two days ago may have been the victim of a calculated‚ well planned ...
News
3 years ago

Mr X said before they left the plot, he was instructed to drain some brake fluid from the car they were travelling in, mix it with the Heineken beer that he was drinking and give it to Shabane to drink. She refused, saying she did not consume alcohol.

They headed to Cullinan where Msibi owned a farm. En route, they smoked dagga and offered it to Shabane to smoke. She refused but Gamedze, who was now in the car, whispered something in Shabane’s ear, leading to her trying to smoke the dagga. She coughed, was instructed how to go about it and try again.

Mr X said they had almost reached Cullinan when they were stopped by traffic officers and parking a short distance from the metro cop, Mkhize quickly swapped seats with Msibi, making it seem as though Msibi had been driving. The officer was told by Msibi that he was teaching his son, Mkhize, how to drive. Mr X said the officer shone his torch into the car and asked why there was so much smoke in the car. He also commented on them being drunk.

Msibi got out of the vehicle, went to speak to the officer, returned to collect R100 from Mr X which he used to bribe the traffic official and they were let go.

Along the way, Mr X said Shabane spoke to them.

A police officer has described the trauma that he and other officers experienced when they discovered remains believed to be those of Gabisile ...
News
3 years ago

On arrival at the farm, Msibi went to fetch the house keys from Lawrence, a shepherd who stayed on the property, opened the door to his house and the men and Shabane headed inside. Shabane walked into the house willingly.

“Mr Msibi told the child to sit on the bed and not to be afraid as that was her new home and her mother was coming. She complied,” said Mr X.

They left her in the bedroom, locking the door behind them. Once outside the room, Msibi instructed Mr X and Mkhize to return into the room and force the child to drink the brake fluid-laced beer.

They went back into the room, used a sterner tone with her, telling her they were not there to play games. But it was also while in the room that they began asking her questions about her origins, Mr X said.

“She said her name is Gabisile Shabane. She is residing at Witbank and is attending school at Njunja High School in grade 8,” said Mr X, who stated this contradicted the information Msibi had earlier told him that they had located a person from KwaMhlanga.

“She further said that tomorrow, she wanted to go to school,” said Mr X.

After the men gathered outside the bedroom again, drinking, Msibi allegedly instructed Mkhize to drive back to Witbank, saying the vehicle they were using would be needed to take his child to school in the morning. Mkhize obliged.

Mr X said it was then that Msibi and Gamedze began preparing knives and told Mr X to fetch Shabane. He fetched Shabane who walked out of the room behind Mr X.

“Mr Msibi instructed me to carry the child on my back as she had no shoes on. Along the way to the bushes, we came across a wire fence, I put the child on the ground for us to go through the fence. Along the way, the child was asking me questions on where we were going and when we were coming back. I replied that I also don’t know but we will come back,” said Mr X.

They reached a tree where they all stopped and he put her on the ground.

“Mr Msibi ordered me to go back to the house to collect a bucket of water but the child pleaded with me that I must not leave her behind as her trust was with me. I told her that Mr Msibi has sent me [to the house] and I will come back,” said Mr X.

He returned minutes later to be met by Msibi and Gamedze as he walked towards them. Shabane was no longer with them.

Currently on trial for Shabane and her nephew’s killing are Msibi, Mkhize and Knowledge Wezi Mhlanga, who was alleged to be a patient of Msibi’s.

Gamedze died behind bars while waiting to be extradited to SA from Eswatini, while a fifth accused, Josiah Thubane, pleaded guilty to his part in the murder in 2019. He is already serving his sentence. 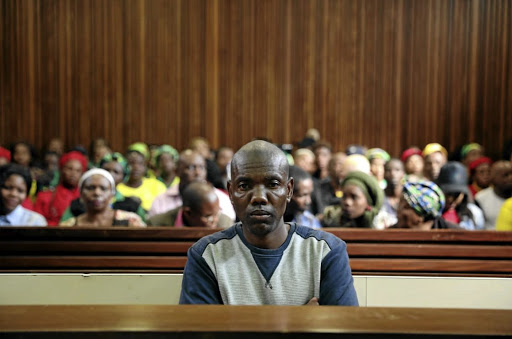 The state's case is that Thubane — a teacher turned businessman — and his business partner had been introduced to Msibi, who they believed was a powerful muti man, by Mhlanga.

Thubane and his business partner were accompanied by Mhlanga for a consultation with Msibi. When they arrived, they found Gamedze also present.

In his confession, Thubane told the court he was advised by Msibi to bring him a person with albinism to boost his struggling rental property business.

Msibi had known of Gabisile and another child living in the same home who had albinism and apparently informed them of this.

Thubane, Mhlanga, Msibi and Gamedze allegedly met to hash out and execute the kidnapping plan. They broke into the Shabane household in Hlalanikahle in January 2018, pointed firearms at the family and fled with the children.

Thubane had told the court that he was haunted by his deeds and had decided to come clean.

The trial against his three alleged accomplices continues.

MEC in Mpumalanga arrested in connection with two murders

An MEC in Mpumalanga has been arrested in connection with at least two counts of murder and one count of attempted murder, national police said on ...
News
3 months ago

Msibi was involved in a scuffle during an ANC branch meeting that left two people dead and two wounded.
News
3 months ago

Gauteng traffic officer gunned down at his home in Boksburg

A Gauteng traffic officer was shot and killed by unknown robbers at his home on the East Rand on Sunday evening.
News
3 months ago

A 30-year-old Mpumalanga man has been hauled before court to answer to a charge of murder after the death of a two-year-old girl from suspected ...
News
3 months ago