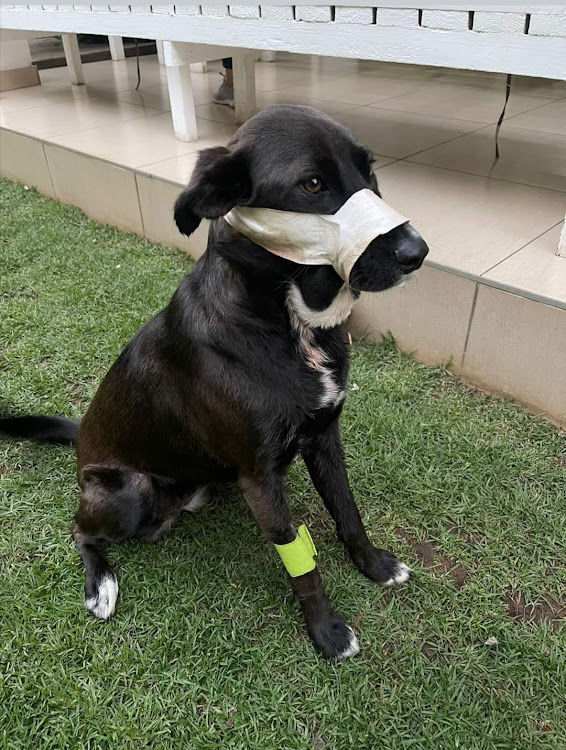 Kei, the heroic dog who protected her family from intruders
Image: Boksburg SPCA

An SPCA rescue dog took a bullet for her adopted family while trying to protect them during a violent home invasion in Benoni.

Kei, a young cross Malinois dog who was shot in the face during the attack, will receive an award from the Boksburg SPCA for her heroic deed.

According to the SPCA, two armed robbers broke into the Lamont family’s home in Lakefield during the early hours of last Sunday while they were asleep.

“One intruder entered the main bedroom where a terrifying shoot-out took place and the intruder was shot dead.

“The second intruder entered the eldest daughter’s bedroom, gun in hand, not knowing Kei was also on the bed and watching over her best friend.

“Kei recognised danger immediately and flew across the room before the intruder could get through the door, attacking him with a force he wasn’t expecting.

“The intruder retreated into the hall and down the stairs, leaving a trail of blood behind him. As he was fleeing he shot and killed the family’s Biewer Yorkie named Holly who, as small as she was, gave her life to protect her family.”

Kei chased the intruder down the stairs and into the kitchen, where the intruder opened fire and shot her in the face.

“Kei knew she had to get help and, despite her injuries, made her way out the gate to alert a neighbour she knew well. Surveillance footage shows her pacing up and down at the gate trying to get help.

“She couldn’t bark because a bullet had shattered her jaw. With no luck, she ran down to the lake, a place she’s familiar with, looking for help.”

After a frantic 40-minute search the family managed to locate Kei and contacted the SPCA to assist.

“Kei was rushed to an after-hours vet where they stabilised her and gave her morphine. Things didn’t look good for Kei.

“Later that morning Kei was X-rayed. It was found the bullet had entered the side of her nose, shattered two top molars, severely injured her tongue and broken her jaw. Surgery was done to repair the tongue and bullet wounds.”

She was referred to the Onderstepoort Veterinary Academic hospital where it was established she would need reconstructive surgery on her jaw.

“The Boksburg SPCA will present Kei with an award for heroism as soon as she’s better. Kei protected her family because she felt loved and was not simply placed in the back yard for ‘security,’ like so many dogs in this country.

“This is a beautiful example of how an unwanted, cross breed, SPCA animal can go from ‘zero to hero’.”

A home invasion on Sunday night left a man dead and his wife fighting for her life after they were shot by robbers in Randpark, Johannesburg.
News
3 months ago

Man dies after being shot in head, chasing down 'petrol station robbers'

A man tragically died on Wednesday due to a wound he sustained while chasing after a group of robbers in Gqeberha.
News
3 months ago

The SA National Editor’s Forum has called on law enforcement officials to crack down on those who attack journalists after armed attacks on two TV ...
News
3 months ago