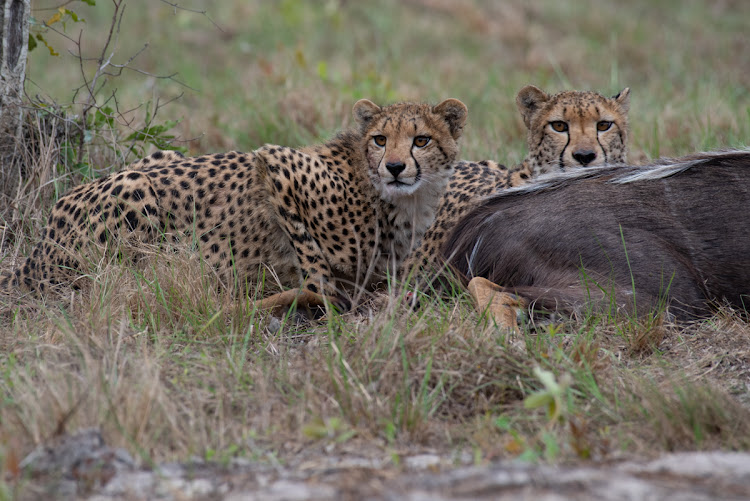 The reintroduction of cheetahs into well protected areas is one of the crucial actions identified to save the species from extinction.
Image: Peace Parks Foundation

Thanks to generous offerings and the involvement of private game reserves and Ashia Cheetah Conservation in SA, four of the endangered cats will soon roam the wildlife-rich plains of Maputo Special Reserve in southern Mozambique for the first time in more than 60 years.

The animals have been transported safely to holding bomas within the reserve. They are undergoing an acclimatisation period before being released into the reserve in a three-week process that will see the successful reintroduction of the world’s fastest land mammal in Mozambique.

They will be carefully monitored daily by the reserve management, in partnership with the University of Eduardo Mondlane and the Endangered Wildlife Trust (EWT).

The reserve is managed through a partnership agreement signed between Mozambique’s National Administration for Conservation Areas (ANAC) and Peace Parks Foundation in 2018 and is supported by Ashia Cheetah Conservation, the EWT and the Mozambique Wildlife Alliance as veterinary partner. 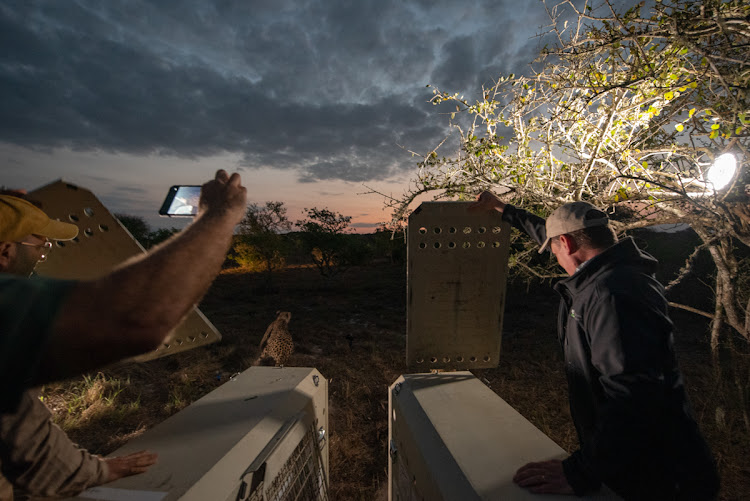 A night release of the second pair to arrive within their own holding boma in Maputo Special Reserve.
Image: Peace Parks Foundation 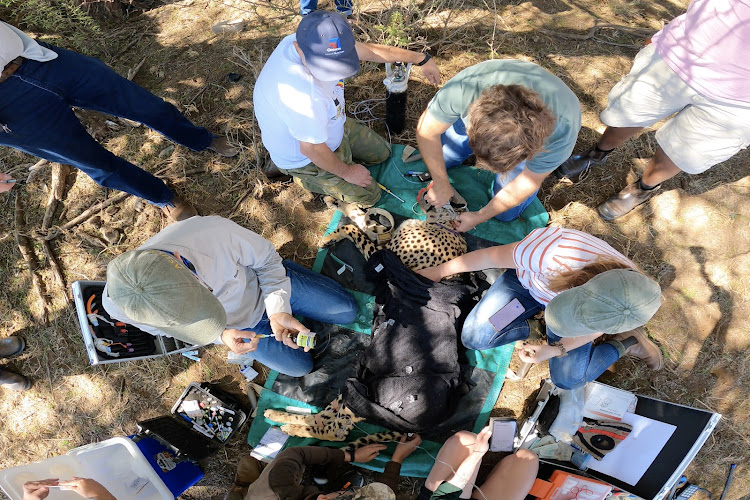 Decades of combined expertise between conservation partners was harnessed to ensure the success of this milestone translocation.
Image: Ashia Cheetah Conservation 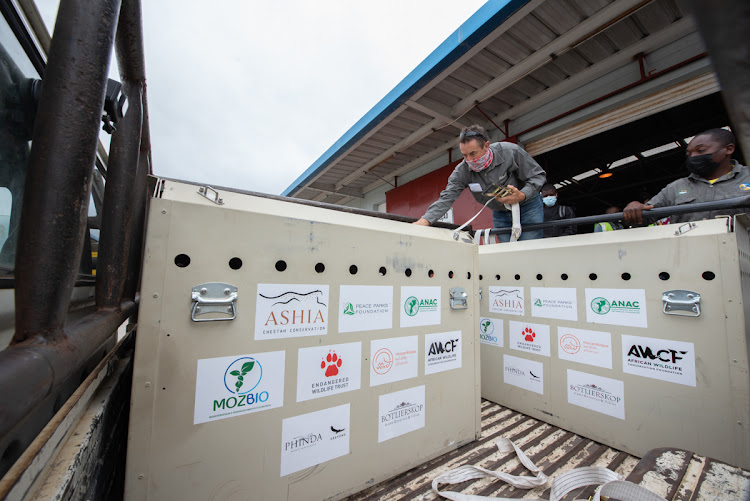 The four cheetahs were safely flown in by plane from two private game reserves in SA.
Image: Ashia Cheetah Conservation 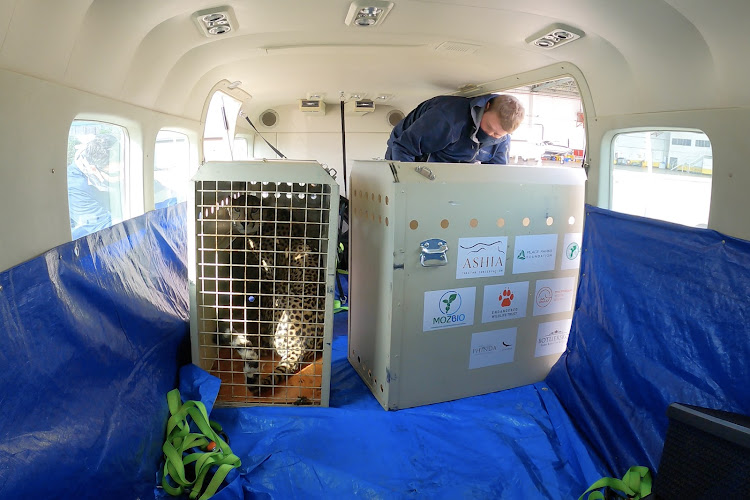 The four cheetahs safely on board the plane.
Image: Ashia Cheetah Conservation 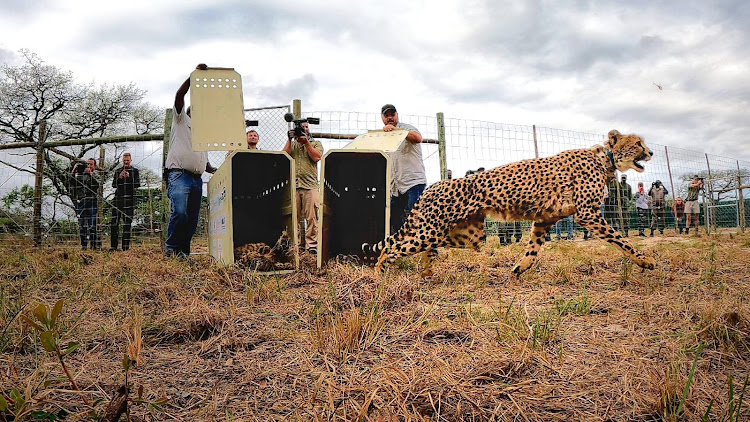 An historic moment as the first cheetah trots into a holding boma in preparation for release into the Maputo Special Reserve, where the species hasn’t been present since the 1960s.
Image: Ashia Cheetah Conservation

The cheetahs were donated by Ashia, which also covered the costs of the translocation, including transportation, vaccination and the fitting of tracking collars to monitor the animals in their new environment.

The reintroduction of the cats in Maputo Special Reserve is part of an ambitious goal to establish a healthy metapopulation (a group of spatially separated populations of the same species which interact at some level) that contributes to the conservation of the cats. Cheetahs have been eliminated from 90% of their range in Africa, with an estimated population of only 6,600 individuals remaining.

Marna Smit, director for Ashia Cheetah Conservation, said the rewilding programme was a vital component of the restoration and development of the reserve.

Funding from the World Bank MozBio Programme has seen almost 5,000 animals, including, buffalo, giraffe, impala, kudu, nyala, waterbuck, warthog, oribi, eland, blue wildebeest and zebra, translocated onto the reserve in the past decade.

This latest operation falls under the EWT’s Cheetah Range Expansion Project which has doubled the cheetah metapopulation from 217 animals in 48 protected areas to 478 in 67 protected areas across SA, Mozambique, Zambia and Malawi.

Anti-poaching ranger trampled to death by elephant at Vic Falls

In a series of fatal elephant attacks in the country, last month another Zimbabwean man was trampled to death while trying to take a selfie with ...
News
7 months ago

Tigers and gorillas in backyards, leopards at pubs and aardwolf pups in homes - and all in the suburbs.
News
7 months ago

A man walks into a bar with a leopard: Lax laws allow deadly predators to be kept at home

Environmentalists say Gauteng is the worst when it comes to the ownership of pet wildlife, especially tigers, with the East Rand and Johannesburg ...
News
7 months ago