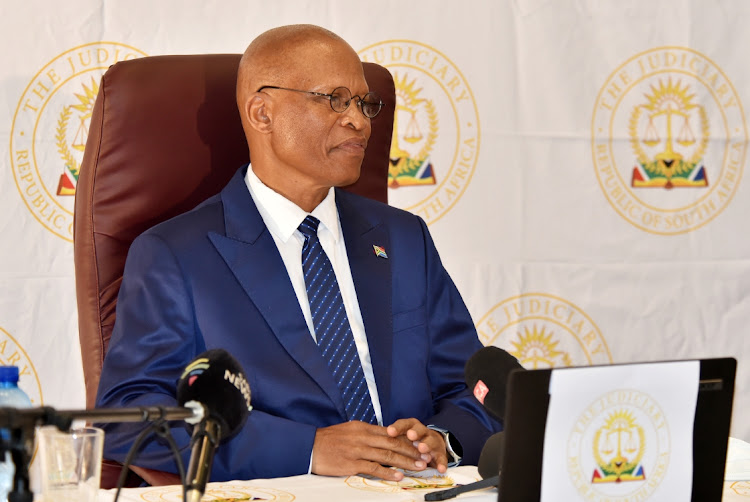 Acting chief justice Raymond Zondo has paid tribute to his boss, now-retired chief justice Mogoeng Mogoeng, by calling him a “guardian of the constitution”.

Mogoeng finished his term on Monday after serving on the Constitutional Court for 12 years.

His term was often controversial but the praise since his departure has been from diverse sectors — including from politicians who want a special parliamentary sitting where Mogoeng can be given a proper farewell.

“Under his stewardship, the judiciary, as an arm of state, has taken strides to vigorously protect its independence and prove itself as the guardian of the constitution. Through his outstanding leadership, chief justice Mogoeng Mogoeng greatly enhanced the standing of the judiciary in our country.

“Mogoeng was a very popular chief justice. He often spoke strongly against corruption in both the public sector and the private sector and emphasised the need for ethical leadership in both sectors,” said Zondo.

He praised Mogoeng for some of his judgments, particularly one that found against former president Jacob Zuma — the very man who appointed him — over the Nkandla homestead saga.

‘He served with integrity’: Mzansi reflects on Mogoeng Mogoeng’s time as chief justice

Mogoeng was the fourth chief justice of SA since the dawn of democracy in 1994.
News
3 months ago

Political parties represented in parliament say Mogoeng deserves a special sitting of the house for the nation to bid him farewell.

Several political parties TimesLIVE contacted said there was no need to depart from parliament's tradition of holding a ceremony to pay tribute to an outgoing chief justice, despite some misgivings regarding Mogoeng as such events had been held for his two predecessors, Pius Langa and Sandile Ngcobo.

Mogoeng vacated office on Monday at a time when parliament was on a long recess to allow parties to campaign for municipal elections. It is not yet clear if the national legislature will hold a session in his honour after the elections.

DA chief whip Natasha Mazzone said that though Mogoeng’s tenure had been marred with controversy, he was deserving of a farewell and she hoped parliament would make up its mind soon.

“The role of the chief justice is one of the most important in our country. I think that the end of any such term should be celebrated and one should always honour the position. Mogoeng has always been a character who has divided the nation many a time, but one always honours the office.

“It is very odd and strange that parliament will not have any form of celebration or at least a thank you motion for the outgoing chief justice, as was always done in the past. It shows a great deal of respect to the judiciary and I would hope that parliament changes its mind and does so quickly after the elections so that the office of the chief justice remains the office which we all hold with the highest respect,” she told TimesLIVE.

Meanwhile, the ANC’s caucus spokesperson, Nomfanelo Kota, said the party would support the speaker’s decision to have, or not to have, a farewell for Mogoeng.

She commended Mogoeng’s role, but expressed dismay for a lack of action after his controversial pro-Israel comments.

In March this year, the Judicial Conduct Committee found Mogoeng guilty over his comments, which sparked public outcry. He was ordered to apologise and withdraw the statements but instead he stood by the comments and refused to retract them.

“We want to wish him well on the completion of his tenure. We appreciated his commitment to the defence of the supremacy of the rule of law and the constitution, as well as his robust defence for the independence of the judiciary.

“However, we wish to state as a caucus that we did not see eye to eye with him on the matter of Palestine and we’re quite sad that he leaves the office while that matter is pending or an amicable solution was not reached between us and him. But over and above, we wish him well,” said Kota.

IFP chief whip Narend Singh commended Mogoeng, saying he served with distinction and proved his detractors wrong, showing fairness and impartiality in the execution of his duties.

Unlike others, Singh was of the view that his religious convictions did not influence or cloud his judgment and, as a result, parliament ought to give him due recognition.

The FF Plus's Wouter Wessels also commended Mogoeng, adding that some really important judgments were handed down during his tenure, among them the Nkandla matter, a ruling against Bathabile Dlamini in 2018 and, recently, former president Jacob Zuma’s contempt case.

“There was a lot of scepticism with his appointment but he has served the Constitutional Court with distinction,” said Wessels.

Both the IFP and FF Plus said they supported a call for a special sitting to honour Mogoeng.

“It [special sitting] has not been discussed in any multiparty forum, so I think it should be discussed and that there should be a decision made. It can’t be a unilateral decision by the executive of parliament. There should be consultations as has happened in the past,” said Wessels.

“We applaud the exceptional contribution that Mogoeng made to the country’s constitutional democracy by strengthening the role of the Constitutional Court during his tenure. He worked very hard to ensure that the administration of justice was bolstered through the apex court. He worked tirelessly to ensure that the independence of the judiciary was not compromised and that the doctrine of separation of powers was strengthened.

“We salute him for remaining faithful to this country — both in word and in deed even under trying circumstances in the evolution of our constitutional democracy — and for upholding and protecting the constitution and the human rights entrenched in it, and for fulfilling his responsibilities without fear, favour or prejudice,” said the presiding officers.

Mogoeng Mogoeng, who retires at midnight, is lauded for some judgments, but made several questionable remarks
News
3 months ago