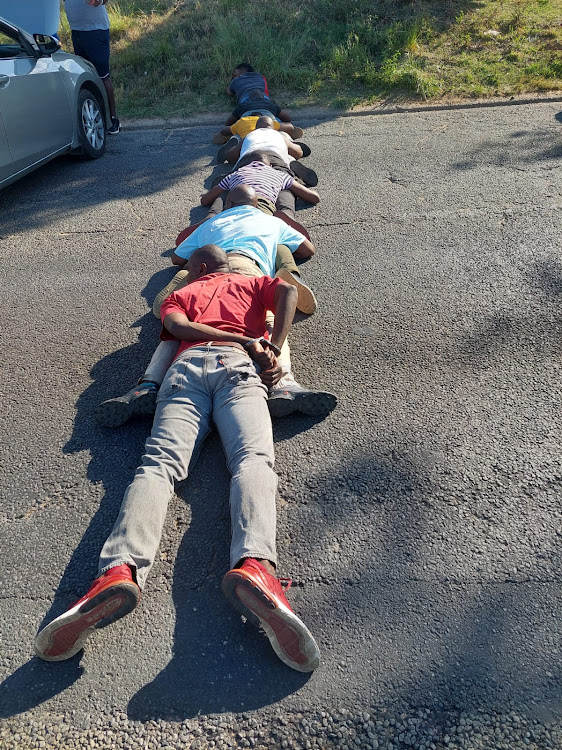 Police arrested seven suspects in connection with a foiled robbery that was set to take place at a retail store in Woodmead.
Image: SAPS

Johannesburg police arrested seven men for a foiled robbery that was due take place at a retail store in Woodmead, Sandton, on Tuesday.

The men, according to police, were found in possession of unlicensed firearms and a car reported to have been hijacked in Benoni.

“Crime Intelligence information about an armed gang that was going to commit a robbery in Woodmead was operationalised.

He said the suspects were spotted on Northway Road in Kelvin, near Sandton, driving a Hyundai H1, a Toyota Corolla and a Honda Jazz.

“Upon stopping and searching two of the cars, police found unlicensed firearms loaded with ammunition. It was established the Toyota Corolla was fitted with false plates and the Hyundai was reportedly hijacked in Benoni, Ekurhuleni,” Masondo said.

He said police were on the lookout for suspects driving a Honda Jazz suspected to be carrying more firearms.

Meanwhile, detectives from Alexandra police station arrested a 50-year-old woman for possession of four unlicensed firearms, about 100 rounds of ammunition and jamming devices. The woman was arrested during a raid on a house in the township.

“Suspects are expected to appear at the Randburg and Alexandra magistrates’ courts in due course,” said Masondo.

“I am pleased with a well-co-ordinated effort by the Crime Intelligence and Operational Policing units that led to a foiled robbery and the arrest of criminals involved in serious and violent crimes.

“Police will continue to clamp down on serious and violent crimes and the proliferation of unlicensed firearms in our province, especially as we are heading towards the festive season.”

Two arrested after jewellery store owner gunned down in Centurion

Two suspects have been arrested in connection with a robbery at a jewellery store at Centurion Mall in which the owner was killed, Gauteng police ...
News
7 months ago

A large amount of contraband, including dozens of cellphones, chargers, dagga, muti and cash were discovered during a raid at the Qalakabusha ...
News
7 months ago

An attack in Pretoria by 30 AK47-wielding gunmen on a Fidelity Cash Management Services van has sparked fears that SA’s annual heist season has ...
News
7 months ago