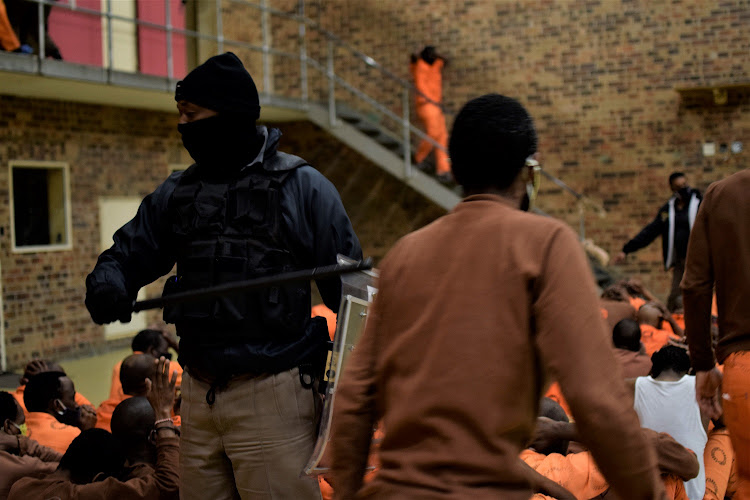 A correctional services officer orders inmates to leave their cells and sit in the quad with their hands above their heads during a raid at Qalakabusha Correctional Centre on Tuesday.
Image: Orrin Singh

The department of correctional services is expected to crack the whip on the management of Qalakabusha Correctional Centre in northern KwaZulu-Natal after dozens of cellphones, weapons and drugs were discovered during an unannounced raid on Tuesday.

The raid was conducted by a national task team from the department, in conjunction with other stakeholders, after a number of prison escapes as well as an incident earlier this year where hundreds of cellphones were confiscated from inmates at the facility.

A large amount of contraband – including dozens of cellphones, chargers, dagga, 'muti' and cash – was discovered during a raid at the Qalakabusha Correctional Centre in northern KZN on Tuesday morning.

Sources within correctional services said the prison had left the department with egg on its face after four inmates from its maximum-security unit escaped in three separate incidents within 12 months.

“It's literally becoming a mini Westville Prison — and for such a small part of northern KZN to have to deal with criminals of this nature who have escaped, it's not a good thing.”

Tuesday's bust saw 37 cellphones, at least R12,000 worth of dagga, “muti” and handmade weapons confiscated from 296 inmates who were searched.

“Is this what I have to come here to find? I need to abandon my duties at national and come here to find this? I don't know what you are doing here because clearly you are not working,” a livid Thobakgale was overheard reprimanding one of the prison officials.

He said standard operational procedures were clearly flouted at the facility.

A large amount of contraband, including dozens of cellphones, chargers, dagga, muti and cash were discovered during a raid at the Qalakabusha ...
News
1 month ago

The dozen men escaped through a hole in the wall of the Mount Frere police station cells, before fleeing through a gap cut in a perimeter fence.
News
2 months ago

The two men who kidnapped a four-month-old baby during a home robbery escaped through a hole in the fence at Leeuwkop prison in Bryanston, the ...
News
2 months ago