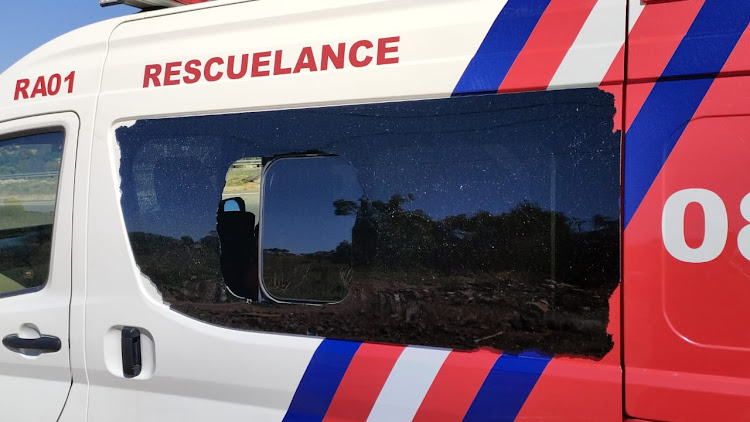 Two medics had a lucky escape when a large rock was thrown through an ambulance window.
Image: Supplied

Two ER24 medics and a patient survived an attack on Thursday when a large rock was seemingly thrown through an ambulance window on the N14 in Krugersdorp, west of Johannesburg.

The paramedics, identified as Quinton and Zelda, were taking the patient to a nearby hospital after he was involved in a vehicle rollover accident.

“Quinton was driving the ambulance when he heard a loud noise from behind. The crew managed to evade the hostile environment and found a safe place to stop and assess the situation. Fortunately, the medics did not sustain any injuries,” said ER24 spokesperson Russel Meiring,

A second ER24 ambulance was called to the scene to take the patient to hospital.

“On the scene of the crime, medics found the large rock in the left-hand lane. A witness to the incident stated that two young men had thrown the rock at the ambulance.

“ER24 has taken proactive measures, such as smash-and-grab window tinting, and so on, and training our staff on emergency medical support in a hostile environment to ensure the safety of staff and patients.

“Local authorities were on the scene to investigate.

“ER24 condemns all attacks against emergency workers and asks the community to report any incidents such as these.”

Phumzile Dlamini, a paramedic with 10 years' service and mother of three, was preparing to transport two patients to a Midlands hospital when the ...
News
3 weeks ago

Five people, including infant, killed in head-on collision on R555

Five people, including an infant, were killed in a head-on collision on the R555 just outside Middelburg in Mpumalanga on Wednesday evening.
News
2 weeks ago

Man in critical condition after attempted hijacking on East Rand

A man in his 30s was left in a critical condition after an attempted hijacking on the N12 near the R555 in Daveyton, Ekurhuleni, on the East Rand on ...
News
2 weeks ago

Healthcare workers are suffering mental health strain, depression and heightened anxiety brought on by the Covid-19 pandemic.
News
1 week ago