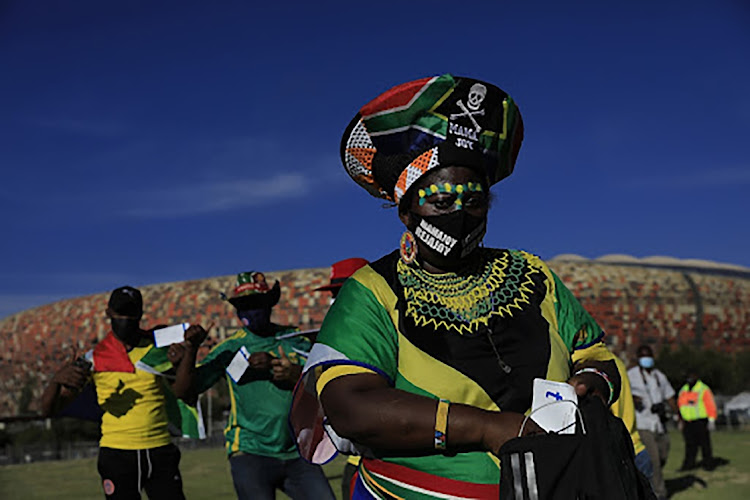 Soccer fans were back in the stands as Bafana Bafana took on Ethiopia in a World Cup qualifier.
Image: Alon Skuy

SA is pushing ahead with plans to reopen stadiums for sport events as the country’s “Return to Play” programme gathers steam.

Tuesday marked the first step in the programme when 2,000 fans took up their seats at the FNB Stadium in Johannesburg for Bafana Bafana's World Cup qualifier against Ethiopia, which SA won 1-0 after visiting captain Getaneh Kebede scored an own goal.

Speaking at the weekly Covid-19 briefing on Friday, health minister Dr Joe Phaahla said the government was committed to the return of “open life”.

“The plan to increase various activities for people to attend, especially if they are outdoors,” he said.

This week’s game was a chance to ensure that all the systems worked, there was no congestion and all protocols were followed, said Phaahla.

The South African Football Association (Safa) has condemned supporters who went to the FNB Stadium to attend Bafana Bafana’s match against Ethiopia ...
Sport
1 month ago

The campaign, a joint effort between the health and sport, art and culture departments and formally known as “Return to Play – it’s in your hands”, was launched by Deputy President David Mabuza in September.

Sports fans will need to present vaccination certificates to attend events, as well as have bought tickets in advance.

Phaahla also said on Friday that Covid-19 vaccination for children aged 12-17 would start on October 20. The electronic registration system was due to open on Wednesday, with vaccinations starting the same day.

Parents would not be required to give consent for their children to be vaccinated as the Children’s Act provided for 12 to 17-year-olds to provide their own consent for any medical treatment, said acting health DG Dr Nicholas Crisp.

The age group accounted for about 6-million people. “It would be good to vaccinate at least half of them between the school holidays and the end of exams,” said Crisp.

The programme would not be rolled out at schools this year — children aged 12 and older would be vaccinated at public and private vaccination sites instead, he added.

Phaahla said the department was monitoring “short-lived cases” of transient myocarditis — inflammation of the heart muscle — which have been reported in a handful of patients elsewhere in the world after receiving a second dose of the Pfizer vaccine.

“There is no indication that the first dose has any serious side effects, but it still offers significant protection,” he said.

Phaahla assured people there was no evidence of permanent risk in the few diagnosed cases of myocarditis. “We're just taking precaution in this case.”

The recommended six-week gap between the first and second jabs would also allow the health department to keep abreast of any further developments regarding the vaccine, he added.

About 19,899,964 vaccine doses have been administered in SA as of Thursday, with more than 10.5-million people now fully vaccinated. This means SA is almost halfway to its target of vaccinating 70% of its adult population by the end of December.

Health minister Joe Phaahla said the electronic registration system would be open for this age group from Wednesday with vaccinations starting the ...
News
1 month ago

Dr Mohammed Variava, a nephrologist at the Netcare Pinehaven hospital, would normally call the families of his patients but with about 60 patients a ...
News
1 month ago

SA recorded another day of fewer than 1,000 new Covid-19 cases, according to figures from the NICD on Thursday.
News
1 month ago

‘We are back to life’: just 2,000 fans got to watch Bafana win in person, but being there meant so much more
News
1 month ago