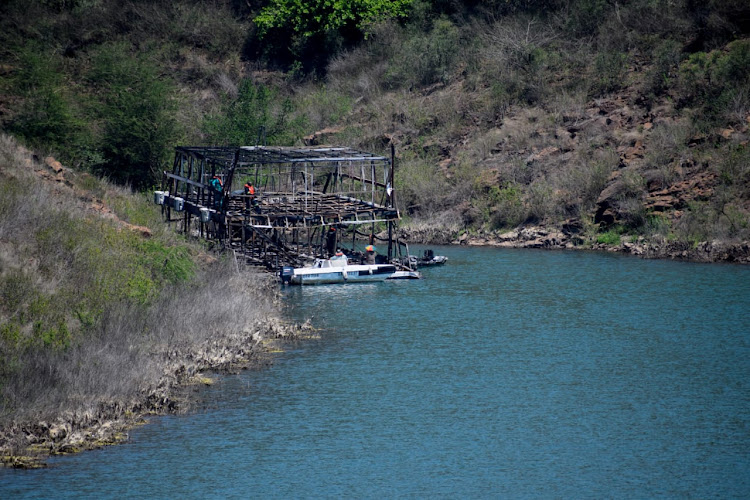 Inspectors from SA Maritime Association aboard the Shayamanzi on Lake Jozini. The luxury houseboat caught fire on the lake near Pongola on Saturday.
Image: Orrin Singh

The body of a crew member who went missing after a fire on a houseboat on Lake Jozini in northern KwaZulu-Natal was found on Friday.

Sources said Bongani Nyawo's body was found at the spot where the tragedy occurred on Saturday.

SAPS spokesperson Capt Thembeka Mbele said the body was found at about 3pm on Friday.

“The family members were present when the body of the deceased was recovered and it was positively identified by the brother to the deceased,” she said.

Mirschel's sons and their two friends were still in SA, making arrangements for the repatriation of his body.

In a letter to the SA Maritime Safety Authority​ (Samsa), Mirschel's son Alexander, who had booked the exclusive charter, outlined his evaluation and experience of the condition of Shayamanzi and its emergency protocols.

Samsa is investigating the tragedy.

Left with just one working cellphone, a set of clothing each, substitute passports and little cash, four German men are trying to plan their next ...
News
1 month ago

Alexander Mirschel, whose father drowned during a houseboat fire, has told Samsa about the harrowing incident
News
1 month ago

‘Lord be with them,’ prays woman as R27k-a-night houseboat burns

The KZN tragedy has led to the deaths of a crew member and passenger, with another crew member still missing
News
1 month ago