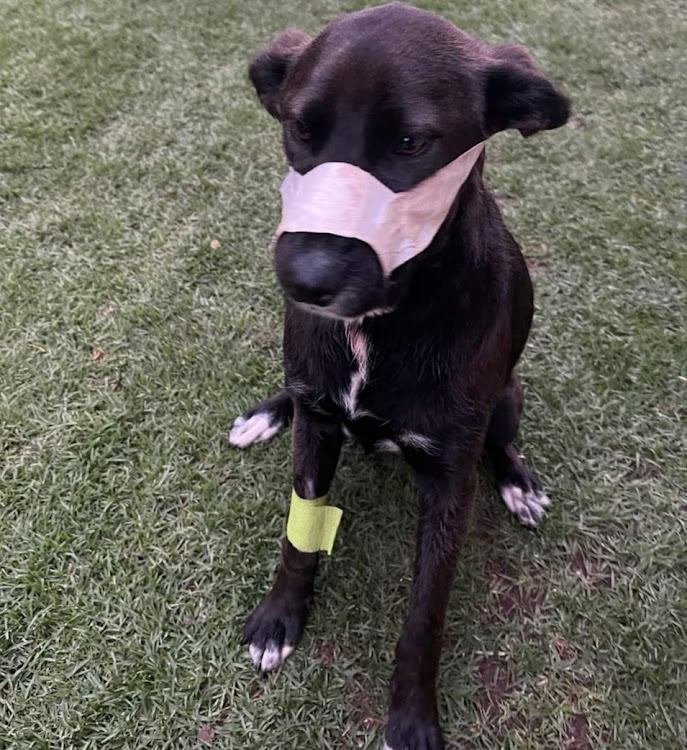 A pet insurer will settle the medical bills of heroic dog Kei who was shot while trying to protect her adopted family during a home invasion.
Image: Boksburg SPCA via Facebook

A pet insurer was so moved by heroic dog Kei's bravery when she took a bullet for her adopted family during a violent home invasion that they decided to foot her R60,000 medical bill.

dotsure.co.za made the announcement this week after learning about the SPCA rescue dog's “extraordinary act of bravery”.

The young cross Malinois dog, who was shot in the face during the attack, will also receive an award from the Boksburg SPCA for her heroic deed.

According to the SPCA, two armed robbers broke into the Lamont family’s home in Lakefield, Benoni, during the early hours of last Sunday while they were asleep.

One of the robbers was allegedly shot dead while Kei took on the second robber, who shot her in the jaw while making his escape.

Even with a severely shattered jaw, the little dog desperately tried to alert the neighbours by pacing up and down at their gate. When she failed to get their attention, she sought help further afield.

dotsure.co.za was so moved by Kei’s love and devotion that they have undertaken to settle the veterinary hospital bills for several procedures and reconstructive surgery on her jaw.

The Lamonts adopted Kei from the Boksburg SPCA last year – and it was the SPCA the distraught family called for assistance when they found their canine hero with a shattered jaw and top molars, severely injured tongue and other shrapnel injuries after the harrowing home invasion.

She couldn’t bark because of her wounded jaw.

The family’s other dog, Holly the Biewer Yorkshire terrier, was killed during the attack.

After the incident, Kei was rushed to an after-hours vet where she was stabilised, scanned and operated on. She was then referred to the Onderstepoort Veterinary Academic Hospital in Pretoria for further treatment and initial surgery.

She is now home and her wounds have been dressed, but is on medication and is being tube-fed. Further scans and treatment await – including the fitting of a plate in her jaw and a possible bone graft.

“When we heard about the ordeal the Lamont family went through and Kei’s brave actions to save them, despite her own serious injuries, we simply could not stand back – we knew we needed to step in and help,” said dotsure.co.za COO David Roache.

“We know that pets are more than animals – they’re family. We’re deeply moved by this little dog’s heroism.

“Kei is getting the best treatment, and we look forward to partnering with the Lamonts on Kei’s journey, hopefully back to full health,” said Roache.

Sarah Lamont, Kei’s dog parent, said: “It's so reassuring to know that people can be so wonderful and kind.

“Thank you to dotsure.co.za for making it so much easier for our family to recover from this traumatic incident and for proving that humans actually are good, after all.”

Officials in Cape Town arrested three people and confiscated four dogs during a raid on an organised dogfighting event in Atlantis on Saturday ...
News
3 months ago

A Netcare employee who was accused of trying to dump a dog in the Boksburg area has been cleared of any wrongdoing after an inspection by the SPCA ...
News
3 months ago

“It was absolutely shocking what we witnessed there,” said Meyer. “The paws of the lions were covered in blisters. As the lions tried to stand up ...
News
3 months ago