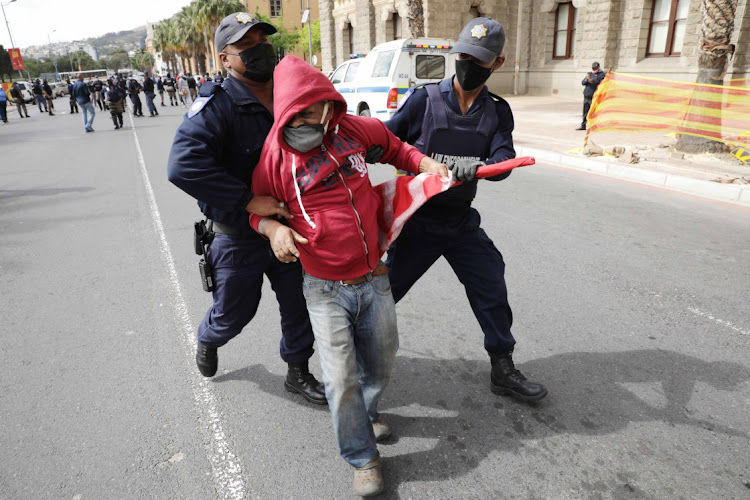 A group of people protesting against Cape Town’s new bylaws were met with stun grenades as police and other law enforcement agencies stepped in to disperse the crowd.
Image: Esa Alexander

Protesters who led a march against new Cape Town bylaws aimed at curbing the occupation of public and private spaces by the city’s growing population of homeless people were dispersed by police using stun grenades on Friday.

The protesters, who were part of a march organised by six social justice advocacy groups, claimed that the city’s new bylaws were unconstitutional and that they criminalised people who sleep on the streets.

The Unlawful Occupation Bylaw and the amended Streets, Public Places and the Prevention of Noise Nuisances Bylaw were approved by the city council on September 29, giving law enforcement officers greater powers to enforce existing national legislation against illegal occupation of land.

“These crucial bylaws will help us to protect land and buildings from unlawful occupation. We are a caring city seeking to uphold the rule of law,” said Cape Town mayor Dan Plato after the approval of the new bylaws.

A group of people protesting against the City of Cape Town's new by-laws were met with stun grenades as Law Enforcement and Public Order Police disperse the crowd. @TimesLIVE @CityofCT @WesternCapeGov pic.twitter.com/7zH7Z0RK48

He said once gazetted, the new bylaws would also lawfully oblige officials to offer social assistance to street people, including shelter, to ensure the “constitutional enforcement of the prohibition on sleeping in public places.

“The city has a constitutional obligation to make sure that our public open spaces and our city remain sustainable, that there is equality before the law, and that while we are offering assistance to help people off the streets, our bylaws are being applied equally to all residents at the same time,” said Plato.

But the protesters claim the new laws are racially discriminatory. “We see these bylaws as a continuation of the city using its planning laws and policies to racially exclude and criminalise the poor people of this city,” read a statement by Ndifuna Ukwazi, one of the organisations that took part in Friday’s march.

They were joined by Reclaim the City, Singabalapha, Housing Assembly, Movement for Care, and Rehoming Collective in rejecting the bylaws.

“These bylaws were approved ... despite more than 8,000 signed objections to the draft of the Unlawful Occupation bylaw and legal challenges to the Streets bylaw,” Ndifuna Ukwazi said.

A group of people protesting against Cape Town’s new Unlawful Occupation Bylaw and amended Streets Bylaw were met with stun grenades when law ...
News
1 month ago

It demanded that the city dispose of the bylaws.

“These bylaws criminalise people who live on the streets, people who have been forced to occupy land because there is a lack of affordable housing, and people living in informal settlements across Cape Town.”

According to Ndifuna Ukwazi, the city has a housing backlog of almost 370,000.

“The lack of political will to address generations of dispossession coupled with the systemic failure on the part of all levels of government to deliver on the promise of a functioning government-subsidised housing programme have all contributed to this housing crisis,” it said.

According to Western Cape police spokesperson Warrant Officer Joseph Swartbooi, the protesters marched down Darling Street near the Grand Parade on Friday at 11am. Their target was the “housing offices” in the city centre.

Swartbooi said the police used stun grenades after the protesters ignored an instruction to disperse.

“A 39-year-old man was arrested and detained. Once charged he is expected to make a court appearance in the Cape Town magistrate's court on Monday on a charge of contravention of the [Regulation of] Gatherings Act,” he said. 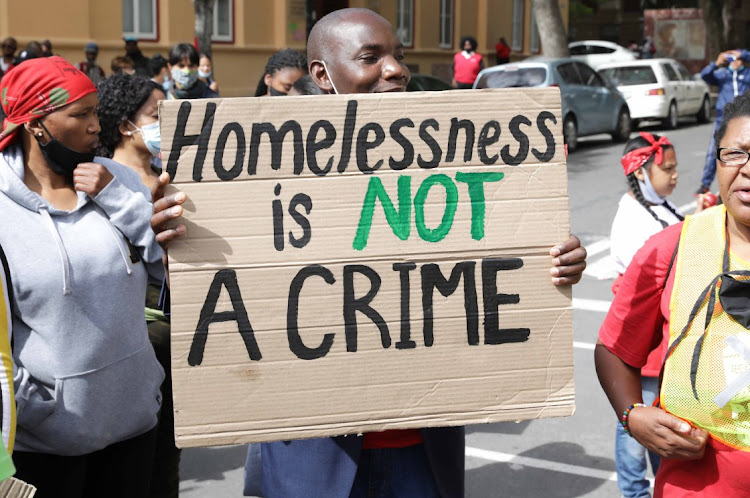 The City of Cape Town said on Sunday its social development and early childhood development department will be spending just shy of R27m on ...
News
1 month ago

Public works minister Patricia de Lille has lashed out at the DA over claims it is unable to build housing in the Western Cape because it is waiting ...
Politics
2 months ago

The City of Cape Town safety and security committee has approved amendments to a bylaw which could result in homeless people being fined if they ...
News
2 months ago