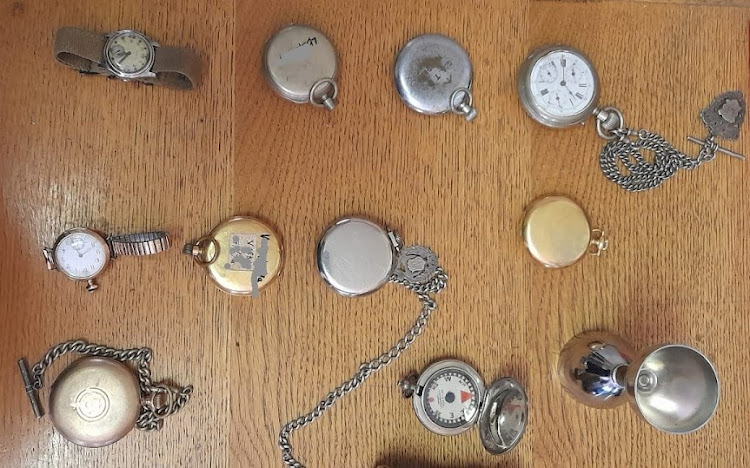 Some of the Anglo-Boer war antiques found in the possession of a Free State man.
Image: Supplied

Free State police arrested a 36-year-old man found in possession of antique equipment used in the Anglo-Boer War on Friday.

Provincial police spokesperson Brig Motantsi Makhele said the man could not explain how he got them.

Makhele said the Parkweg tracing intervention unit was tipped off about a man in possession of Krugerrands.

“They reacted on the information and arrested a 36-year-old male with a plastic bag after he was found in a meter taxi in Parkweg near the municipal swimming pool,” said Makhele.

“In the plastic bag and in his pockets of the trouser, members found antique watches dating back to the 1800 period, binoculars used by Anglo-Boer War soldiers, antique knives, medals and coins all to the value of approximately R600,000.

“The suspect could not give police a clear explanation of where he found the valuable antiques.”

Makhele said the suspect is set to appear in the Bloemfontein magistrate's court for possession of suspected stolen goods.

The fire that destroyed R20m worth of equipment in a storeroom at the Carletonville Hospital in February this year was caused by arson, according to ...
News
1 month ago

Erlings Shoes is no more as Jozi’s city centre changes

The flight of white people – and capital – from what was once Johannesburg’s central business district has changed the face of the city, for better ...
News
2 months ago

The regional court in George in the Western Cape has slapped a former museum employee with a 12-month prison sentence for stealing copper from ...
News
1 month ago