#BIKES4ERP founder shot dead for his bike and wallet 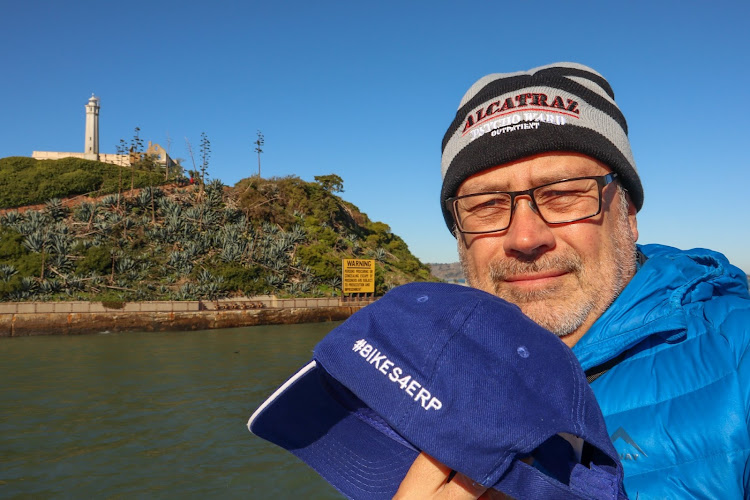 Family man, businessman and cyclist Gert Vermeulen, co-founder of the bicycle NPO #BIKES4ERP was shot dead while out riding in Centurion with his friend and neighbour Jannie Goosen on Saturday morning.
Image: Facebook

Gert Vermeulen — a family man, IT specialist and passionate crusader who worked hard to get bicycle donations for rural children to get to school — has been shot dead for a bicycle and wallet.

Pretoria police spokesperson Lt-Colonel Mavela Masondo said Vermeulen was out riding with his neighbour and the neighbour’s son in Mnandi, Centurion, on Saturday morning when they were attacked by five men.

Vermeulen’s neighbour and training partner Jannie Goosen told Netwerk24 that they rode past a group of four men walking along a dirt road. They were about to pass a fifth man who was talking on a cellphone when the man pulled out a firearm and shot Vermeulen twice without saying a word, killing him.

The attacker then took Vermeulen’s wallet and bicycle and casually rode off, followed by the four accomplices.

Masondo said “a case of armed robbery and murder has been opened” and police were appealing to anyone with information to call their nearest police station or Crime Stop on 08600 10111.

Goosen told Netwerk24 that he immediately contacted his community WhatsApp group and phoned his wife, who was out walking with Vermeulen’s wife Ineke when the murder happened. The women both arrived on the scene along with other cyclists in the area, but Vermeulen had already died.

Goosen said Vermeulen’s son Jean, who lives in the US, was in SA visiting his parents when the murder happened. Their other son Guillaume, who lives in Malta, was expected to arrive in SA on Sunday.

Vermeulen was the co-founder of Bikes4ERP — a non-profit organisation that donates bicycles to children in rural areas who walk more than 10km a day to get to school. ERP stands for elephants, rhinos and people.

His business partner and co-founder Nicolai van der Merwe explained on the ERP website that he and Vermeulen had met as work colleagues, struck up a friendship and began cycling together in 2012.

“Little did I know that it was the start of an enduring friendship that would have a profound impact on my life,” he wrote in a blog post 10 days ago, titled ‘The ERP Story’.

Van der Merwe said they did research and developed a project that has grown over the last six years, and had currently helped over 400 children.

The website explains that for a donation of R3,000 or US$200 a bicycle is made available to a rural child who enters into a two-year study-to-own agreement through which they use the bicycle to get to school. The bike usage is monitored weekly and repairs are done by “appointed bicycles mechanic” Samuel Matheta.

The project is designed to address exhaustion and absenteeism of rural children in the short term and improve their education prospects in the long term.

“Interestingly, #BIKES4ERP has had an unexpected and positive impact on our for-profit business. People from different practices and service lines, at different levels of seniority, have found themselves working together sometimes in inverted relationships, from a seniority point of view. I love this unintended consequence of #BIKES4ERP,” Van der Merwe wrote.

Vermeulen dedicated much of his life to his passion for helping others with bicycles. He died for it too.

The taxi driver charged with driving into two cyclists and dragging one to his death is set to apply for bail in the Randburg magistrate’s court on ...
News
1 month ago

Dozens gathered at the Kempton Park magistrate’s court on Thursday morning to draw attention to the trial involving a taxi driver accused of mowing ...
News
1 month ago

“This is the most shocking tragedy and I cannot condemn it strongly enough. It is the most horrific, barbaric form of murder and we cannot, as a ...
News
1 month ago