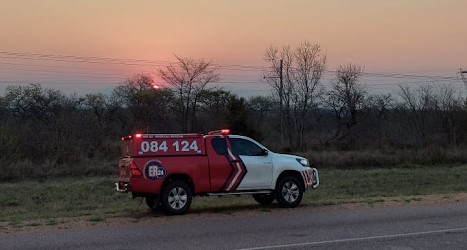 ER24 paramedics rush a 36-year-old woman to an airport where she can be airlifted to hospital after she suffered a heart attack while on holiday in the Kruger National Park.
Image: ER24

A woman has been airlifted out of the Kruger National Park for cardiac care, a man is in critical condition after he was ejected from his car when it rolled and a child drowned in a town house complex swimming pool in three separate incidents this weekend.

In the first, a 36-year old woman was airlifted to hospital after suffering a second heart attack on a game viewing holiday in the Kruger Park.

“The park rangers at her campsite had already offered to transport her to their 24-hour medical facility at Skukuza when she initially experienced pains the night before. ER24 paramedics travelled from Tzaneen, dispatching a private medical helicopter to fly ahead to Skukuza airport once they arrived on scene.

Two major crashes on Sunday have led to six deaths. Two of the victims were thrown from the back of a bakkie by the impact.
News
1 month ago

“Our paramedics treated the patient, who was in a serious condition, with advanced life support interventions before transporting her through to the airport to meet the helicopter. The patient was then flown to a private hospital in Centurion for specialist cardiologist care,” said Campbell.

In a second incident, a 32-year-old man suffered life-threatening injuries when his car rolled on the R502 in Orkney, and he was ejected.

“ER24 paramedics arrived on the scene at 5.33pm on Saturday along with the fire department to find the injured man lying some 25m from the wreck of his VW Polo on the side of the road. He was assessed and found to be in a critical condition,” Campbell said.

Advanced life support interventions were needed to stabilise the man before he was transported to Tshepong Provincial Hospital in Klerksdorp for further care.

Police investigators were called out to determine the cause of the car rolling, as this was not known.

A major crash involving four trucks and a light duty vehicle brought traffic to a standstill on the N2 highway in northern KwaZulu-Natal on Wednesday.
News
2 months ago

Netcare 911 paramedics were called out to a complex in the Umhlanga business district in KwaZulu-Natal. They were told that a 10-year-old girl had been found unresponsive in the complex swimming pool.

“When medics arrived on scene, the child had already been pulled out the pool,” said spokesperson Shawn Herbst.

He said the circumstances leading up to the drowning were not known, and the child was declared dead on the scene.

In a fourth incident, a five-year-old boy suffered critical injuries and a 31-year-old woman moderate injuries in a single-vehicle rollover on the R550 near Sky City in Vereeniging on Sunday morning.

ER24 paramedics arrived on the scene at 11.09am along with the Ekurhuleni Fire Department, according to the statement.

“The light motor vehicle was 5 to 10 metres from the road and the two injured occupants had been ejected from the vehicle and were lying on the ground. The driver of the vehicle was found uninjured, but the five-year-old boy was in a critical condition and required advanced life support interventions before being flown by medical helicopter to a private hospital for further care.”

The 31-year-old woman was found to have suffered moderate injuries and was treated and transported to Thelle Mogoerane Regional Hospital for further care.

Two ER24 medics and a patient survived an attack on Thursday when a large rock was seemingly thrown through an ambulance window on the N14 in ...
News
1 month ago

Left with just one working cellphone, a set of clothing each, substitute passports and little cash, four German men are trying to plan their next ...
News
1 month ago

A tyre blowout is believed to have caused a luxury coach to lose control and crash on the N3 highway on Tuesday.
News
1 month ago