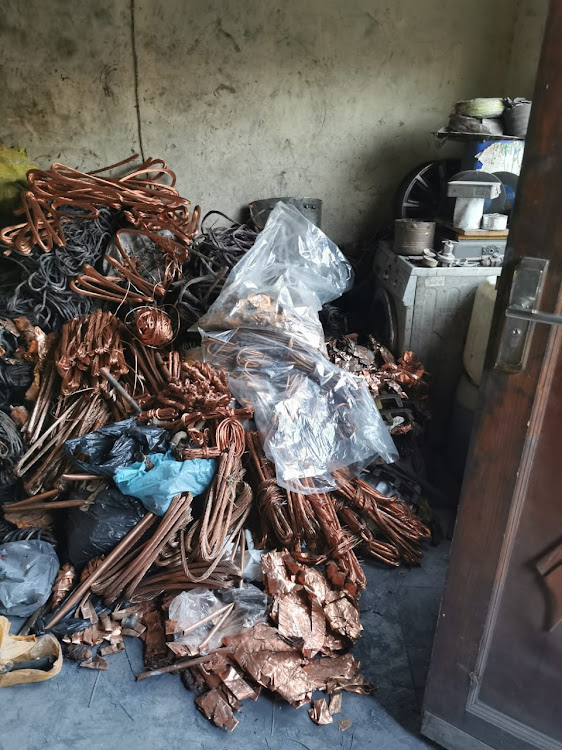 Police said 25 suspects were arrested in Witbank on Friday on charges including possession of suspected stolen property, possession of drugs, selling liquor without a licence and contravention of the immigration acts.
Image: SAPS

A joint operation led to the arrests of 25 people in Witbank, Mpumalanga, after stolen copper and mining equipment was found.

The operation was carried out on Friday by members of the Witbank police and the Witbank Community Policing Forum. It targeted areas in Witbank, including Klarinet and Coronation Park.

Suspects aged between 20 and 31 were apprehended on several charges including possession of suspected stolen property, possession of drugs, selling liquor without a licence and contravention of the immigration acts.

According to police, the intense operation culminated in the closure of an illegal scrap metal shop where suspected stolen copper wire was confiscated. Mining drills worth millions of rand were also seized.

The suspects are due to appear in the Emalahleni magistrate’s court on Monday.

Meanwhile, two men accused of stealing 18 solar panels worth R180,000 remain in custody after their appearance in the Emalahleni magistrate’s court on Thursday.

Police said they were arrested last Tuesday after an investigation by members of the Witbank Crime Intelligence and Visible Policing.

“It is reported police received information about suspects in possession of suspected stolen solar panels which they kept at their places of residence. The information was operationalised by the team and the items were confiscated.”

Their case was postponed to October 21.

Free State police arrested a 36-year-old man found in possession of antique equipment used in the Anglo-Boer war on Friday.
News
8 months ago

Police have made three arrests after the suspected gang-related shooting of guests at a birthday party in Mitchells Plain at the weekend.
News
8 months ago