Traumatised woman alleges minibus mowed down cyclists, dragging one to his death 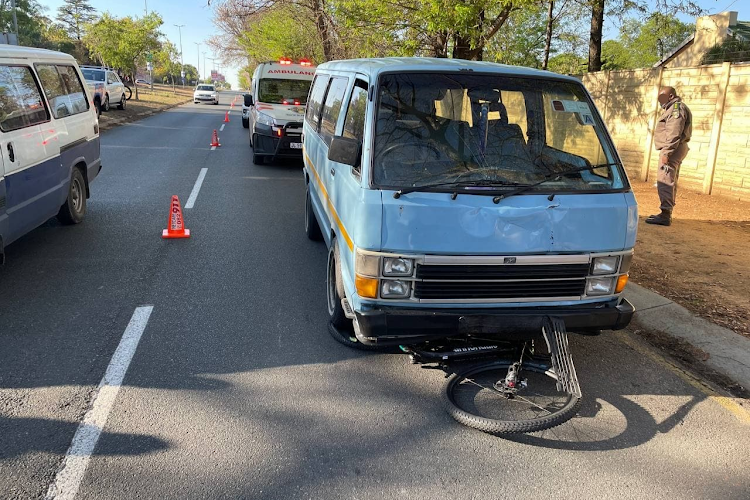 A passenger who was in this taxi when it allegedly hit cyclists Geoff Lee and Alex Otto has spoken out about her experience.
Image: Netcare 911

A woman who works in retail and was a passenger in the taxi that allegedly knocked down two cyclists, pulling one under its wheels and dragging him to his death, has spoken out about the traumatic experience.

“I am still deeply traumatised and am battling to make sense of what happened. I am also worried about the family of the cyclist who died and their need for closure, wanting to know what happened that day,” she told TimesLIVE.

She asked that her identity be withheld.

Her desire to speak followed news reports on the tragedy that claimed the life of Johannesburg businessman Alex Otto and the subsequent court appearance of taxi driver Bongomusa Wellington Ngcobo, 28, who is facing charges of culpable homicide and drunk driving.

The woman has not been asked for a statement and left the scene in a hurry to get to work after the accident. She was badly rattled by the events but did not know at that stage that Otto had been killed.

The taxi driver charged with driving into two cyclists and dragging one to his death is set to apply for bail in the Randburg magistrate’s court on ...
News
3 months ago

She boarded a taxi in the Joburg CBD early on October 3, heading for the Morning Glen Mall in Kelvin Drive, Sandton.

“I was on my way to work and the driver was drunk and angry and speeding. Before we even left town he had issues, and was speaking in Zulu. I don’t know what his problem was, but he yelled at a guy who was walking in the road,” she said.

She said she and other passengers were uncomfortable as the taxi was littered with empty beer bottles and it appeared as though the driver had been drinking through the night.

“When we got close to the Sasol garage in Kelvin we saw there were two traffic officers there. The driver started telling us he doesn’t have a licence and his disc is expired and he started to go faster and jumped a red traffic light,” she said.

All of us started screaming and yelling at the driver to stop, but he doesn’t want to hear anything and he carries on and on.

Witness to killing of Alex Otto

The taxi headed into Bowling Avenue, where cyclists Geoff Lee and Otto were on a training ride, in the slow lane.

“We were also in the slow lane and as we approached the cyclists I was thinking, this guy is going to switch lanes. But he doesn’t, and then he bumps the first guy out of the way and then he drives over the body and the bike of the second guy. All of us started screaming and yelling at the driver to stop, but he doesn’t want to hear anything and he carries on and on,” she alleged.

She said the driver eventually came to a halt at a four-way stop and immediately bolted.

“We screamed and screamed and there was a bakkie behind us. The driver tried to run, but there were two security guards who came to help and someone fired two gunshots. I couldn’t handle it and I was already late for work so I ran. Later when I stopped to think about what happened, I told myself it was the bike that was dragged underneath.”

It was only in the days that followed when she read news reports about the tragedy that she came to understand Otto was dragged to his death under the wheels and his body was later extracted with hydraulic equipment.

“I am still badly traumatised, but I would like to speak to the family of Alex Otto.”

When the taxi driver charged with ploughing into two cyclists and dragging Alex Otto to his death appears in court on Monday morning, the Otto family ...
News
3 months ago

Dozens gathered at the Kempton Park magistrate’s court on Thursday morning to draw attention to the trial involving a taxi driver accused of mowing ...
News
3 months ago

Tears flowed at dawn, people hugged, quiet whispers and clenched hand-holding - then five minutes of complete silence in memory of Alex Otto, 50, the ...
News
3 months ago

“This is the most shocking tragedy and I cannot condemn it strongly enough. It is the most horrific, barbaric form of murder and we cannot, as a ...
News
3 months ago