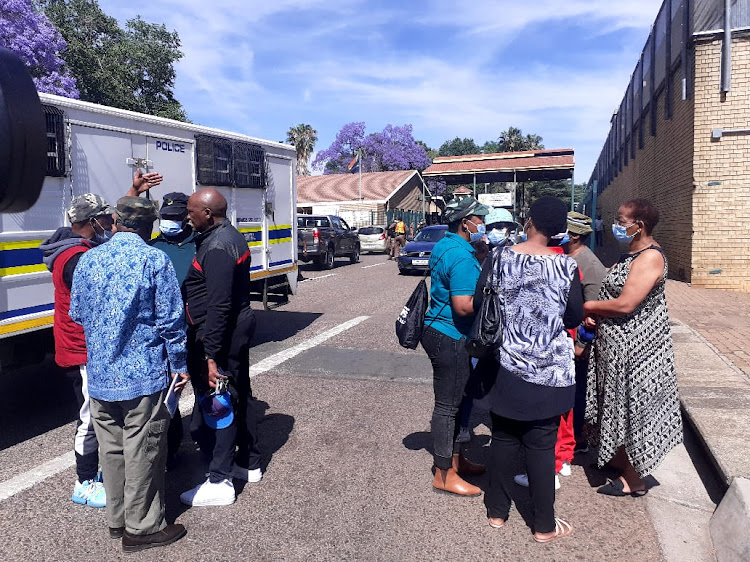 A group of people who identified themselves as military veterans outside the Kgosi Mampuru prison, where suspects are due to appear on charges related to the recent 'hostage' situation involving two cabinet ministers.
Image: Shonisani Tshikalange/TimesLIVE

Disgruntled military veterans who allegedly held ministers Thandi Modise and Mondli Gungubele “hostage” last week are set to appear in the prison court at the Kgosi Mampuru Correctional Facility in Pretoria on Monday.

TimesLIVE reported previously that 56 people were arrested and are likely to face charges of at least three counts of kidnapping after Thursday night’s drama. Three of the people arrested were taken for medical checks.

Some members of the liberation struggle war veterans are gathered outside the prison in solidarity with the accused.

Lesly Kgogo, a member of the war veterans, showed TimesLIVE a video of events in the Saint George Hotel, saying the veterans were not armed and were negotiating with the ministers.

“I feel bad that our comrades have been arrested for something that is not worth it. These are people who have liberated the country and they cannot be treated as hooligans.

“They are not terrorists. They are family people. Every minister who is sitting in parliament today is there because of them,” he said.

At court at Kgosi Mampuru prison where 56 accused are set to appear. Members of the military veterans are outside. @TimesLIVE pic.twitter.com/264VKDrNIY

Ministers and deputy minister say though they were held against their will, it was not a violent ordeal.
Politics
1 month ago

The government has rejected demands by military veterans to have their members paid a one-off R4m each for their contribution to the struggle against ...
Politics
3 months ago