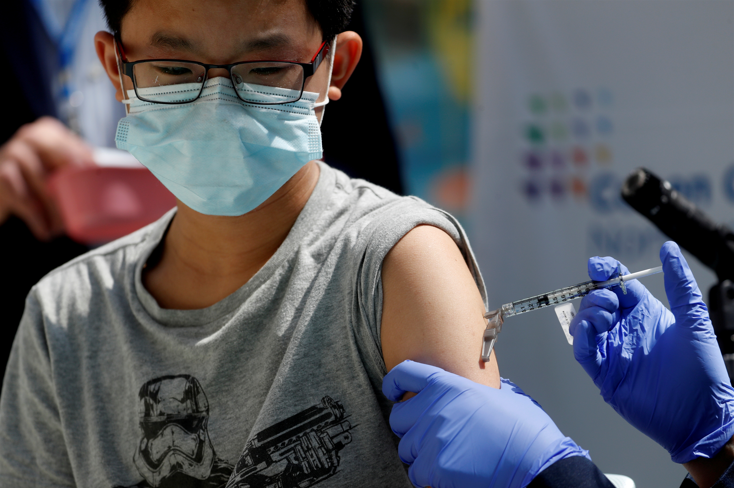 Children between 12 and 17 years old will be able to get the Covid-19 vaccine from this week.
Image: REUTERS/Shannon Stapleton/File Photo

Children who will be eligible for Covid-19 vaccination have given mixed reaction to the prospect of getting the jab, with many sharing their hesitation and others saying they are ready to do their bit to keep society safe.

The department of health last week announced that it had been given the green light to vaccinate children older than 12. Speaking at the weekly Covid-19 briefing on Friday, health minister Joe Phaahla said the electronic registration system would be open from Wednesday, with vaccinations starting the same day.

It is recommended that children be given one dose of the Pfizer vaccine.

In interviews with TimesLIVE, conducted before last week's announcement, four 13-year-old child reporters from RX Radio in Cape Town, shared their thoughts on getting the vaccine.

Adam* said although child vaccination would provide some much-needed protection for immunocompromised children, he had questions about its efficacy and whether the protection decreases over time.

“I would like to know how efficient the vaccines really are? Will people need to go for boosters each year if it does not work for the long term? If [vaccination] was optional, no [I would not get vaccinated] because different people have different reactions,” he said.

“I'm very sceptical and scared about the vaccine. Did they do test trials on kids? How long will the vaccine protect you?

"People say the vaccine will only last for eight months. When it's time for my age group to get the vaccine, I will not take it because I am scared of taking the vaccine,” he said.

Penelope* described the approval of the Pfizer vaccine as “intense” but said she is not vaccine-hesitant, as she understands that the main benefit of the vaccine is to prevent severe Covid-19 symptoms.

“They said on the news the vaccine won't save you. It is not a cure, but it will help you fight against Covid-19. It won't prevent you from getting it. You will still get it but you will have mild symptoms,” she said.

Addison* said, while the approval of the Pfizer vaccine for emergency use in children could strengthen the response to the pandemic and protect vulnerable children, she wanted clarity about the reports of deaths allegedly caused by the Covid-19 vaccine.

On August 20, the South African Health Products Regulatory Authority (Sahpra) released a report on its investigations into adverse events that occurred after vaccination. It had concluded 32 cases and found that 28 of the deaths were not linked to vaccination while four were unclassifiable due to outstanding information.

It said deaths that have occurred after vaccination have often been wrongly attributed to the jab.

Last month, the regulator, in partnership with Pharma-Ethics, an independent research ethics committee approved the vaccination of 2,000 children and adolescents as part of the global phase 3 clinical trials of China’s Sinovac Biotech vaccine.

The trials are testing the efficacy of Sinovac's two-dose CoronaVac on 14,000 children aged between six months and 17 years. Participating countries include SA, Kenya, the Philippines and Malaysia.

We can be proud, but shots in arms urgently needed now

Sahpra said the vaccine would be authorised for use after the trials, if it is found to be effective against the Covid-19 variants of concern.

Foster Mohale, spokesperson for the department of health, told TimesLIVE the approval of the vaccine would help in the fight to protect those at highest risk of severe complications if they get Covid-19.

Our priority is to reach more people who are at higher risk of severe complications if they contract the virus. These include those living with comorbidities and elderly people. The majority of them are 50 years and above,” said Mohale.

The South African Paediatric Association (Sapa) welcomed the approval of the vaccine, saying it is in line with international standards.

“We are very pleased about this announcement, as it is in keeping with the international practice, where Covid-19 vaccine is now approved for children too. Vaccines are good and will protect people.

“This is a disease that affects mainly adults and so they are being prioritised. Any trials that are rolled out are always checked in the laboratory. When safe in adults, when well tolerated in adults ... then [they are administered] in children,” said Prof Mignon McCulloch, executive of the association.

She added that children with severe comorbidities would be prioritised in the vaccination queue ahead of their “well” counterparts. McCulloch could not confirm whether children would be required to take booster shots until the clinical trials are concluded.

“This may happen, as in adults boosters are found to be beneficial, and we will learn from the trials that are happening in children if this will be the same,” she said.

Sahpra said teenagers would experience the same side effects as those seen in adults. It added that there have been rare cases of heart inflammation among young boys who took the Pfizer vaccine.

“Based on study data shared, the common side effects are similar, and in very rare cases there have been signals of myocarditis and pericarditis was reported in young males,” it said.

Health minister Joe Phaahla said the electronic registration system would be open for this age group from Wednesday with vaccinations starting the ...
News
7 months ago

We welcome the announcement this week by health minister Joe Phaahla that children between 12 and 17 will be eligible for a single dose of the Pfizer ...
Opinion & Analysis
7 months ago

Vaccinations against Covid-19 will open for teens aged between12 and 17 on October 20. They will be able to get one shot of Pfizer
News
7 months ago