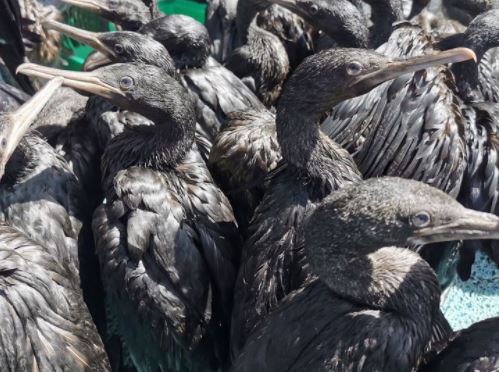 The Southern African Foundation for the Conservation of Coastal Birds warned that the serious outbreak of Avian Influenza among wild seabirds in the Bergrivier Municipality on the West Coast, and the Walker Bay area in the Overberg of the province has had a massive effect on the Cape cormorant populations.
Image: SANCCOB via Facebook

About 700 sea birds are dying daily in the Western Cape from an outbreak of Avian Influenza among wild seabirds.

Provincial minister for local government, environmental affairs and development planning Anton Bredell said authorities had been working all weekend to clean up suspected outbreaks and to remove dead and sick birds to prevent the spread of the virus.

Over the weekend roughly 700 dead birds a day were collected from various regions across the province, with the main hotspots continuing to be the Bergrivier Municipality and Dyer Island in the Overberg.

Most of those affected are Cape cormorants. This is especially distressing after the rescue and rehabilitation of 1,700 Cape cormorant chicks at the beginning of the year.

Bredell said it was critical to prevent the spread of the disease.

IMPORTANT NOTICE!
This year a highly pathogenic strain of avian influenza (bird flu) has been circulating in seabirds in the Western Cape. This viral disease has affected and killed a large variety of seabirds, including pelicans, gulls and cormorants. pic.twitter.com/kka1dLjEw5

“This means people must not attempt to assist or transport any sick birds. This remains a serious situation with the impact hard felt among endangered wild birds particularly cormorants. This is an incurable disease affecting birds, that is not preventive, cannot be treated and is highly contagious to birds.”

The Southern African Foundation for the Conservation of Coastal Birds (Sanccob) , the department of forestry, fisheries and the environment, the SPCA and local veterinarians and several municipal and conservation bodies are collaborating to help monitor and manage the situation.

“Environmentalists have been monitoring the outbreak since May when the virus was first detected in wild seabirds. We believe the mass fatalities seen since last week are due to the beginning of breeding season,” Bredell said.

“There is a very serious outbreak of avian influenza among wild seabirds in the Bergrivier Municipality on the West Coast, as well as the Walker Bay area in the Overberg of the province,” it said. “Sadly, we have received numerous calls about sick or dead Cape cormorants along the coast.”

Nearly 1,700 abandoned Cape cormorant chicks were rescued from Robben Island during a two-day joint operation between various marine and wildlife ...
News
1 year ago

The organisation said signs of the disease vary but to look out for tame behaviour or weakness, muscle twitches and seizures.

In January around 1,700 abandoned Cape cormorant chicks were rescued from Robben Island during a two-day joint operation between various marine and wildlife stakeholders.

At the time a combined statement by the rescuing organisations said an investigation had been launched to determine possible reasons as to why the chicks had been abandoned. Sanccob research manager Katta Ludynia said they suspected a lack of food to be the main reason.

The Disaster Management Centre urges the public to be vigilant and report unusual mortalities in any birds to their local municipality, conservation authority or state veterinarian.