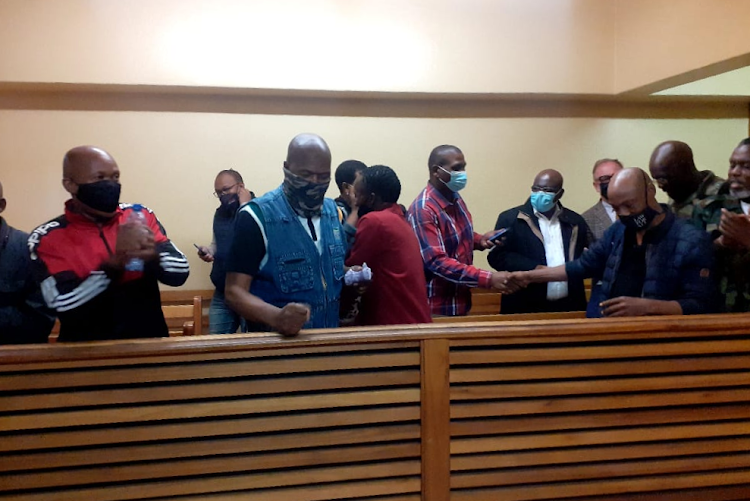 They were released on bail of R500 each.

“In the interest of justice the court has to give judgment now,” magistrate Bheki Ntshingila said before giving his judgment. “Taking into account the circumstances of the accused, despite that a few are working, the court doesn’t believe bail should be set at more than R500.”

Eleven of the veterans initially appeared in the Kgosi Mampuru correctional services court in Pretoria for their bail application on Friday. When the matter proceeded, two of the accused, Thamisaqa Ngade and Bias Nthombela were immediately granted bail of R500 as it was determined that they should have been categorised along with the other accused who had previously been granted bail.

The remaining nine had to make special bail applications because they had previous convictions, including of murder, attempted murder, rape, abduction and robbery.

Eleven former military veterans arrested for their roles in the alleged ministerial “hostage” situation last week will remain behind bars until ...
News
1 month ago

TimesLIVE reported Modise, her deputy Thabang Makwetla and minister in the presidency Mondli Gungubele were allegedly prevented from leaving a meeting at a hotel in Tshwane. Police intervened after veterans barricaded the doors with chairs and refused to allow the three to leave.

The Sunday Times reported their demands included the payment of R4.2m to each of 9,000 veterans at a total cost of more than R37bn.

The police initially arrested 56 people, of whom three were released after they were identified as hotel staff members.

Taking the stand, Mzobe said: “We went to Luthuli House. We didn't march. We wanted to see the president and his top six.”

The 47-year-old said the vets had staged a sit-in at the ANC headquarters days before the kidnapping incident as they didn’t have money to go back to their homes. He said when the incident took place they were trying to get the presidential task team to arrange accommodation and some short-term relief for them so that they could be sorted out until they got a date for a new meeting.

The government that we fought for is the same one that is accusing us of kidnapping.

“Being treated in such a manner shocked us and we explained ... that it was not the way our meetings are handled with the presidential committee. We said we were expecting a meeting with the deputy [president, David Mabuza] and you come late, dictate to us with no explanation why you are late,” he told the court.

Mzobe said there were 10 delegations, including himself, representing the military veterans.

“The others were outside waiting for the feedback of the meeting,” he told the court. “We were beaten by the special forces. After we were beaten, the special forces came out and the SAPS came in with the Hawks. They were searching us and when they found cellphones, they took them. Then there was another person asking for your name, surname and [cellphone] pin code by force.”

He denied any intentions to kidnap the ministers. “No, we were going to attend a meeting. There was no one who was violent because no one was touched,” he said.

He added that the ministers had bodyguards who had guns on them.

“The government that we fought for is the same one that is accusing us of kidnapping.”

When asked about the terrorism charge, he said: “Our stomach turns because [the] apartheid [government] used to call us terrorists, now our government is calling us terrorists.”

Mzobe said he intends to plead not guilty.

The investigating officer, John Sithole, told the court that Mzobe was an active participant on the day of the incident.

“I am in possession of statements from one of the ministers stating that they were physically pushed and verbally told to go back [inside],” he said.

He said according to the statement, Mzobe gave the instruction.

Sithole said investigations were still under way and more statements needed to be obtained from the victims.

The magistrate also questioned why the video footage of what took place was not watched to eliminate those who were innocent.

Sithole said he was busy with paperwork and that it was impossible.

“If there is one person who is innocent, why is paperwork important more than someone's freedom?” asked Ntshingila.

The police had initially arrested 56 people, of whom three were released as they were identified as staff members.

The matter was postponed to February 1 2022.

Forty former military veterans have been granted bail of R500 each, pending trial in the case of cabinet ministers allegedly held hostage when ...
News
1 month ago

The formal bail application of 53 war veterans who allegedly held defence minister Thandi Modise "hostage" last week will continue on Tuesday at the ...
News
1 month ago

TOM EATON | In her defence, the minister didn’t expect to be accosted by her own