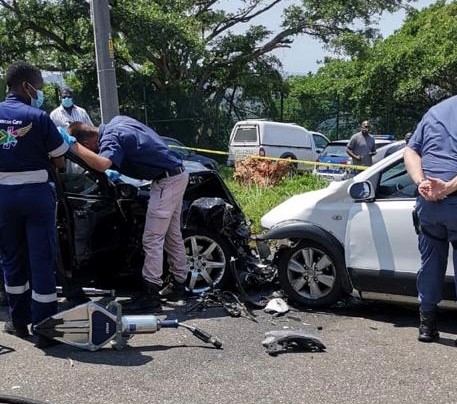 A suspected drug dealer died on Thursday after a police chase ended in a crash in Morningside, Durban, at the corner of Norwood and Trematon Drive.
Image: SAPS

A suspected drug dealer died on Thursday after a head-on collision while fleeing from police in Durban.

According to Brig Jay Naicker, at 11.45am police officers from the Provincial Drug and Firearm Unit were observing a transaction between two men at Kings Park after receiving information about potential drug dealing.

“As the police officers approached the men, one of them sped off in his vehicle.

“A chase ensued towards Morningside and at the corner of Norwood and Trematon Drive, the suspect collided with another vehicle.”

The man, believed to be in his thirties, died at the accident scene and the other motorist was transported to hospital.

Naicker said methcathinone (khat) and cocaine valued at about R5,000 were found inside the deceased's car along with R1,640, which is suspected to be the proceeds of drug trade.

Police have opened a docket for possession of drugs and culpable homicide for further investigation.

By about 7.15pm on Thursday, said SAPS spokesperson Col Dimakatso Sello, officers were still on the scene but had not found anything.
News
1 month ago

A revolver was found in a drawer at a Cape Town hospital on Friday, which was discovered to have been stolen in Potchefstroom.
News
1 month ago

The south Durban community of Wentworth is reeling from the killing of a teenager, who was riddled with bullets outside his home on Wednesday night.
News
2 months ago