The ‘CIA agent’ who never was, plus five talking points from ‘Vrye Weekblad’ 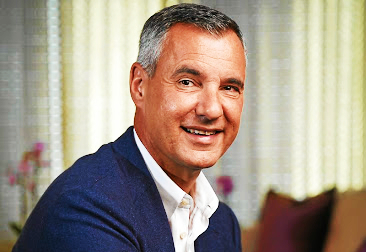 SA-born André Pienaar has been much maligned in the country of his birth. He’s been called an evil foreign agent by former president Jacob Zuma, and been vilified by journalists as a conniving intelligence operator.

He quotes US statesman Franklin D Roosevelt when asked how he feels about this. “Judge me by my enemies,” he says, “not my friends.”

He’s a major player in cybersecurity, and in the space and nuclear power industries.

He leads the Limitless Space Institute and is on the boards of several cybersecurity companies; he’s on the advisory council of the US Institute of Peace; and he’s served on the president’s council of the transnational non-profit, International Crisis Group.

The son of an Afrikaner dominee, Pienaar is also one of the most connected South Africans abroad. He counts among his network former US and UK secretaries of defence Jim Mattis and Liam Fox, senior members of the Tory establishment, and Amazon mogul Jeff Bezos (Pienaar’s wife, Teresa Carlson, is a former vice-president of Amazon Web Services’ worldwide public sector business).

It’s not quite the picture Noseweek once painted — of a “mysterious and some say dangerous freelance intelligence operator”. In other reports, he was bizarrely named as the man who released the secret Zuma “spy tapes”, and was described as a supporter of Nkosazana Dlamini Zuma.

With the release of the spy tape transcripts in 2014, he found himself labelled a “private intelligence operative close to [former president] Thabo Mbeki”.

Pienaar’s name has featured, too, in Zuma’s long-running corruption trial, with the former president’s legal team repeatedly alleging that he was a CIA agent who conspired against Zuma. In their view, this is one of the reasons the case against Zuma should be dropped.

Most recently, in his plea to have prosecutor Billy Downer removed from the case, Zuma claimed Pienaar’s code name was “Luciano” and that former Scorpions boss Leonard McCarthy had “received gifts” from Pienaar while leading the crime-busting unit.

Pienaar was part of a team that set up a standalone specialist law enforcement unit, staffed by the newly trained operatives, to fight organised crime and corruption. Once signed into law, the Directorate of Special Operations, or Scorpions, was born.

So what were Pienaar’s links to Scorpions head McCarthy? And where does “Luciano” come into the picture?

“Luciano”, as Pienaar tells it, was simply a joke between friends.

Read the full interview, and more news, analysis and interviews in this Friday's edition of Vrye Weekblad.

RIDING A PIG OVER THE FINISH LINE | Mobilising around fear in the coming local government elections is just as dangerous for democracy as using electioneering as a race census.

THE WEEK IN POLITICS | Max du Preez writes about the RET brigade who are pretending to be military veterans, about Ivanka Zuma, and the VF Plus who seems to be pulling a Zille.

FREE TO READ – PASS THE PARCEL | Can we trust the Post Office to send our parcels and letters? We rate the other available options.

A NIGHT AT THE ST GEORGE'S | In a brightly lit conference room in Irene's most authentic Mediterranean hotel, resident satirist C. Louise Kortenhoven finds herself in the middle of a hostage drama.

In politics, it is crucial to be taken seriously by both your supporters and your opponents. Stigmatisation poses the biggest danger to any orator. ...
News
3 months ago

"We are all just residents and that is what brings us together. And what residents want is not massively complicated. They want safety, they want ...
News
3 months ago

Another farm murder, plus five talking points from ‘Vrye Weekblad’

Zolisa Panyaza must have known the person who knocked because she opened the door. And was shot dead on the spot. There were allegedly 15 shots. Her ...
News
4 months ago
Is Oscar deur omstandigheidsgetuienis gered?